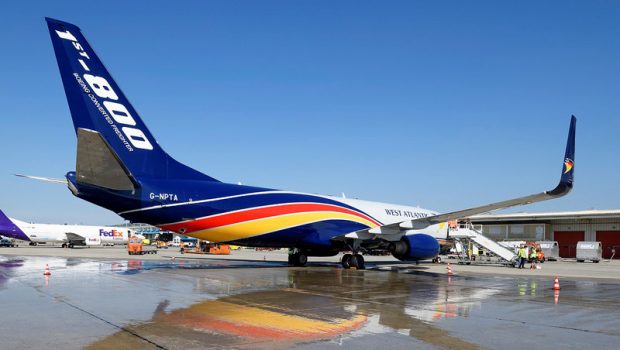 Airliner Experience has obtained permission from West Atlantic UK, for an Enthusiasts Group Visit to the airlines Main Hangar & Maintenance Facility at East Midlands Airport UK. This exciting tour will take place mid-January 2019 and will include a private group visit to East Midlands Aeropark located adjacent to the airport.

Part of the aim is to catch one of the new West Atlantic UK fleet additions and first conversions of its type by Boeing in Seattle. We are of course talking about the new Boeing 737-800 Series Freighter. The first ‘800BCF arrived mid 2018 with the fourth and final due at West Atlantic during our visit.  Not only will this be the first purely cargo airline group visit by Airliner Experience but for many, the first time to view the B737-800F now operating with launch customer, West Atlantic UK.

The group will enter the airlines Maintenance Hangar during the busy winter programme. West Atlantic UK staff from Engineering, Flight Deck and Management Departments will be on hands to meet and greet. The group will enjoy a company presentation and Q&A session before inspecting the latest B737-800BCF having been ferried from Boeing. We anticipate being shown around other aircraft present on the day and look forward to both external and internal inspections.

West Atlantic Group operate a range of interesting aircraft between their divisions in Sweden and the UK, consisting of several modern-classic types. The fleet of fifty aircraft include B767-200F, B737-800BCF, B737-400SF, B737-300SF, CRJ-200PF and of course the venerable BAe-ATP F, along with being a rare aircraft, a classic in it’s own right.

Prior to the main event at West Atlantic UK the aim is for the group to travel to East Midlands Aeropark.  As previously eluded to, the Aeropark is opening purely for our group to enjoy a private viewing of the museums wonderful collection of classic and vintage aircraft on display. Centre stage must be the Avro Vulcan (XM575) and the collection includes BAe Nimrod R1, Armstrong Whitworth Argosy, Buccaneer, English Electric Canberra, De Havilland Dove, Aérospatiale Gazelle, Hawker Hunters, Jet Provost, BAC Lightning, Meteor, Sea King, Vampires to name a few.

The group is welcome to engage in a period of aircraft spotting at East Midlands Aeropark from the dedicated vantage points overlooking the main runway during arrivals and departures.

If you are interested please let us know ASAP

Registration process will be through Airliner Experience. For this exciting opportunity to experience some of the fleet types up close operated by cargo airline, West Atlantic UK and to visit the airlines maintenance facility and enjoying the classic exhibits at East Midlands Aeropark – Don’t miss out – Join us !

For more details including Outline Itinerary and to Register Your Interest email  airliner-experience@live.com . View www.facebook.com/AirlinerExperience 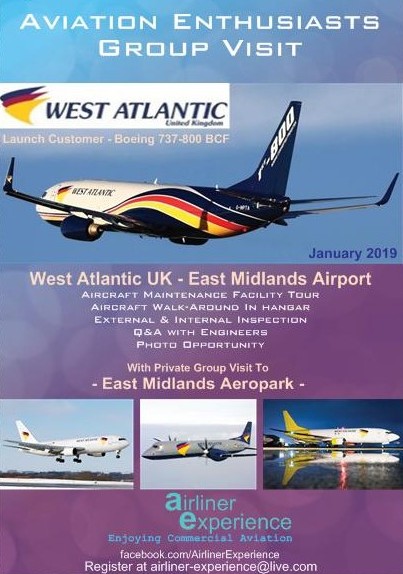