Work has recently been completed on phase 1 of the airports €15m facilities investment plan aimed at further improving the customer experience for passengers and transforming the airport over the next three years – you can watch the video to see phase 1 of completed works below.

Over €4.5m has been invested in the first phase of improvements at Knock Ireland West Airport.  These have been underway for the past 18 months covering new passenger facilities, terminal upgrades and infrastructural works across the airport facility and runway. The local economy has benefited from this latest programme of developments with local contractors and suppliers from across the region being utilised where possible to carry out the works creating much needed jobs in the West.

Still to come is a comprehensive West/North West Visitors’ Centre, which the airport says will have comprehensive content Donegal. Head of Marketing Donal Healy says Donegal County Council is now one of the airport’s partners, and that reflects the important links between the county and the airport

Phase 2 of the airport transformation programme has commenced in the last few weeks and will involve the completion of the following major projects over the coming 18 months. 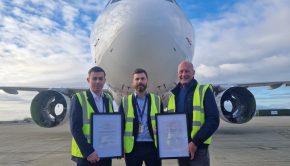