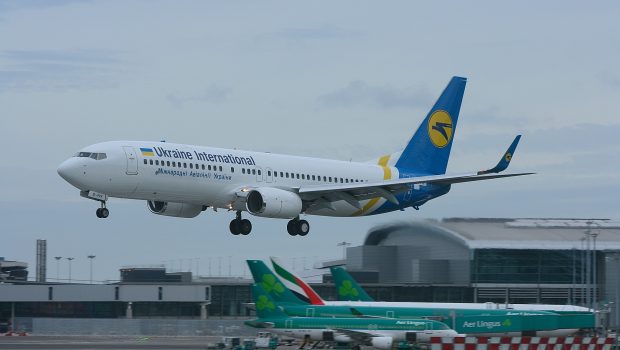 Ukraine International Airlines (UIA) intends to launch a number of new flights within the next five years including to Dublin in 2020. This year it plans to open routes to Vinnytsia, Copenhagen, Cairo, Delhi, Toronto and Sanya.

Ukraine International Airlines (UIA) is the flag carrier and the largest airline of Ukraine with its main hub at Boryspil International Airport outside Kiev. The airline was established on 1st October 1992 and started operations on 25th November 1992 with a Kiev-London flight. It was one of the first “joint ventures with foreign capital” in Ukraine and the first airline in the former Soviet Union to use new Boeing 737-400 aircraft. The founding shareholders were the Ukrainian Association of Civil Aviation and Irish aircraft leasing company Guinness Peat Aviation (GPA). The backbone of the fleet are 23 Boeing 737-800’s, supplemented by 2 x 737-300’s, 1 x 737-500, 4 x 737-900ER’s, 4 x 767-300ER’s, 1 x 777-200ER and 5 Embraer E190’s.

Ryanair had considered launching routes into Ukraine in 2017 when the European Union granted visa-free travel to its 46 million citizens. The deal fell through after Kiev’s Boryspil Airport rejected it as economically unviable. Speaking at the time, Ryanair’s Chief Commercial Officer, David O’Brien said “On behalf of Ukrainian visitors and consumers, we regret that Kiev Airport has demonstrated that Ukraine is not yet a sufficiently mature or reliable business location to invest valuable Ryanair aircraft capacity. Kiev Airport’s failure to honour commitments will result in the loss of over 500,000 customers and 400 airport jobs in the first year alone, which would have provided a significant boost to the Ukrainian economy. We regret also that Lviv Airport has fallen victim to Kiev Airport’s decision.

Yesterday, Ukraine’s Minister of Infrastructure Volodymyr Omelyan confirmed that negotiations with Ryanair had taken place. “Indeed, there were negotiations with Ryanair, indeed they were successful. Indeed, the company will start its flights from Ukraine in autumn 2018,” he said during a press briefing in Kiev. However, the minister did not specify the details, referring to the fact that the contract has not yet been signed. Ryanair have yet to release a statement.