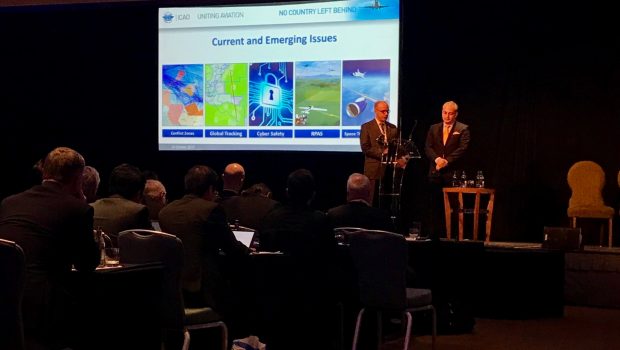 On the second day of the Flight Safety Foundation (FSF) International Air Safety Summit, held in Dublin, the proceedings broke out into two separate tracks: Flight Operations, and Maintenance and Engineering. Flyinginireland.com (proud to be one of the event’s co-sponsors) followed the flight operations presentations and discussions.

Scott Blum, Director,  Aviation and Regulatory Standards at Jeppesen, presented research results into the effects of automation on aircraft accidents and incidents. A study of 20 years of data shows a small but significant contribution by automation to in-flight risks. This needs to be met, Blum proposed, by a commensurate increase in human factors training, and a drive to ensure that pilots fully understand what their equipment is doing during any given phase of flight. 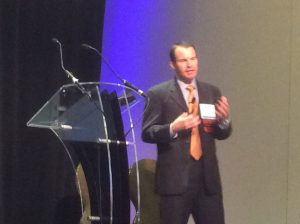 United Airlines pilot, safety researcher, and check airman Mike Gillen described his research into understanding and finding mitigating solutions for the “startle effect”, the involuntary physical and mental responses to a sudden unexpected stimulus. The effect cannot be eliminated, but training can help to soften its impact, he declared. From research with airline pilots in flight simulators he has established that brief targeted training sessions can improve the efficacy of responses to sudden threatening events on the flight deck. If the pilot can keep things stable for 60 seconds, the prospect of safer outcomes increases significantly.

Monitoring: the benefits of Eye-Tracking Technology

Captain Mark Cameron and Dr. Nicklas Dahlstrom, Emirates Airline, presented research findings deriving from the use of eye-tracking technology in the cockpit. While the concept of monitoring is a central one in the aviation, it is difficult to evaluate – “we don’t know what pilots are (or should be!) looking at”. Monitoring, they pointed out is not just “staring harder”. Modern information displays, which hand information to the pilot on a silver platter, as they characterised it, offer so much structure that we don’t really know what pilots are seeing. Further research is called for in this important arena.

The Benefits of Controlled Rest

Fatigue is an acknowledged factor in pilot operations, and a recognised threat to safety. Dr Alexandra Holmes of Clockwork Research offered a convincing argument for the benefit of controlled rest – napping- as an effective fatigue management strategy.  Caffeine is a temporary solutions which just masks the underlying problems. Regulatory attitudes to controlled rest vary from country to country. In the USA it is prohibited, other country’s regulators approve of the concept, but do not specify its parameters, leaving those to the discretion of operators as part of overall fatigue mitigation strategies. She cautioned that while it should not be used as an excuse to extend duty hours, surveys among professional pilots demonstrate significant benefits and improvements in performance during safety-critical phases of flight.

Nicklas Dahlstrom of Emirates, and Ratan Khatwa, senior chief engineer at Honeywell Aerospace, entitled their talk “Train Like you Design: From Scenario-Based Design to Scenario-Based Training”. Their thesis was that the design of training technology can benefit hugely from the input of pilots and instructors from day one of design, so as to maximise its usability in training encounters. Otherwise developers run the risk of creating training systems which suit the needs of designers rather than those of the training end-users. Too often the attitude of designers is “here it is – use it”, to the detriment of full effectiveness and ease of use of systems. They described the efforts of Honeywell to meet this desireable goal in the design of their own systems, illustrating the concept with the results of pilot input into the design of new weather radar systems.

Dr Barry Kirwan of Eurocontrol emphasised the importance of “Joining Up” safety culture across different aviation cultures. He treated the audience to an interesting history of the idea of safety, from the nuclear industry to aviation. He discussed the results of the Future Sky safety survey, which analysed the perceptions of pilots concerning safety culture with their organisations. Among its findings where that while on balance pilots feel safety culture is adequate, over 50% expressed concerns about their company’s attitudes to the risks of fatigue. Also pilots working for low-cost or cargo airlines, or those with non-standard contracts, tend to have poorer perceptions of safety culture. Kirwan warned against the risks attendant on the “pathological organisation”.

Captain Peter Black, Chair of the ALPA (Airline Pilots’ Association) President’s Committee for Remote Operations, gave a fascinating, and somewhat alarming, overview of diversional airport capacity in the far north, those parts of the USA and Canada above latitude 60 deg N. While numerous runways exist as designated alternate destinations in case of emergency, their relative number is diminishing as the size of airliners grows larger. Moreover, getting onto a runway is one thing: also needed are adequate shelter, medical resources, and other facilities essential to safeguarding the welfare of passengers who have to disembark, or even to stay on diverted aircraft for lengthy periods. He instanced a number of airports who have adequate runway length for the largest likely diverted aircraft, but no air stairs to get the passengers off the airplane. Capt Black called for significant upgrading of these airports where necessary, as the amount of traffic overflying the regions expands relentlessly.

The Value of Mentoring

Captain Paul Ryder, ALPA’s National Resource Coordinator, made an impassioned plea to airlines and other aviation organisations to include (if they don’t have them already) mentoring programmes for newly hired pilots. “Informal” mentoring is valuable where it exists, he asserted, but it is not sufficient. Mentoring is a learned skill, and some, but by no means all, airlines have recognised this by providing paid training for mentors. New kinds of conversation are needed with new generations coming into the industry, even engaging flight schools in mentorship liaisons so that the benefits can be present from pilot’s earliest training.

Captain John Allen‘s (Vice President Safety of JetBlue) talk was entitled SMS is to Airline as CRM is to Pilot: The JetBlue Experience. He told the engaging story of his move from the FAA  to join JetBlue with the goal of setting up their Safety Management System. This complex task included the challenges of extracting meaningful information from vast amounts of data and getting it in palatable form to executive decision-makers. Key markers in a healthy SMS, for Capt Allen, are Situational Awareness and Decision Making. Management of the safety function was decentralised across the organisation, while at the same time including the CEO, and vice presidents of divisions, as vital players in the safety environment.

Alan Thorne, Senior Inspector of Air Accidents in the UK’s Air Accident Investigation Board (AAIB) gave a detailed account, from the safety management perspective, of the tragic accident in 2015 at Shoreham on the south coast of England, where a vintage Hunter fighter jet crashed, causing multiple fatalities on the ground. The immediate aerodynamic factors in the crash were relatively easy to comprehend: deficient energy management leading to inadequate height to recover from a looping manoeuvre. But the AAIB’s findings also highlighted an inadequate assessment of risk and potential hazard on the part of the event organisers. Additionally, they were critical  of the Civil Aviation Authority missing opportunities to check the competence of the pilot. Mr Thorne’s talk was a salutary reminder of the multi-factorial influences in many such tragedies. 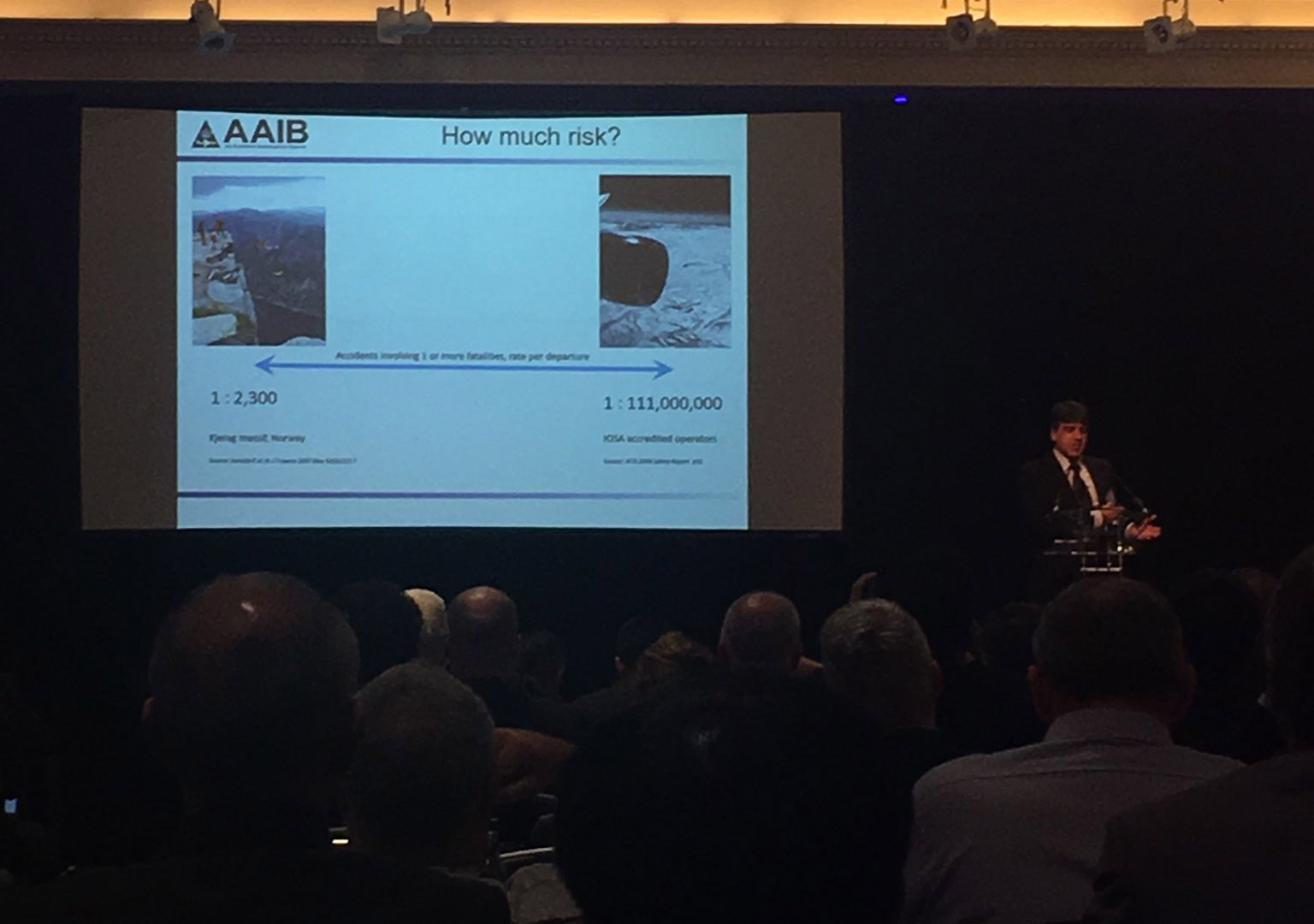 The final talk in the Flight Operations Track on Day 2 was given by Daniel Cheney, Safety Program Manager, Transport Airplane Directorate, Federal Aviation Administration, on “ Lithium-ion Batteries as Cargo”.  Mr Cheney illustrated the safety risk of such cargo with a talk about the loss in 2010 of a Boeing 747 cargo aircraft and its crew, due to a fire caused by the spontaneous ignition and thermal runway of a large cargo of Lithium-ion batteries, and discussed how regulations have been tightened up in the aftermath of this very serious accident. SOPs, and cargo-identification measures have improved.