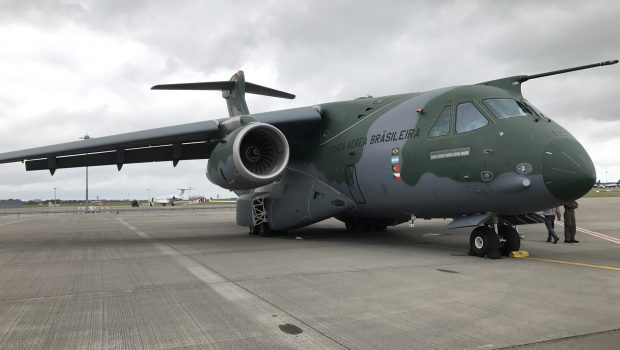 The Paris Air Show held at Le Bourget over the week of 19th to 25th June saw the public display of many new designs which included the new Embraer twin engined military transport aircraft, the KC-390. (It was at Farnborough last year but did not fly). The aircraft visited Dublin on its way home from the show arriving on Thursday 22nd June. The aircraft, PT-ZNJ, is the second prototype and was finished in March 2016 and made the first flight on 28th April 2016. The following day, Friday 23rd the aircraft positioned to Baldonnel and then completed a local flight before positioning back to Dublin. Perhaps a demonstration flight for the Air Corps? It departed the following day to Nouakchott in Mauritania and then on to Windhoek in Namibia as part of a tour of Europe and Africa. The accompanying photos were taken by Finian Darby.

The Embraer KC-390 is a medium-size, twin-engine jet-powered military transport aircraft under development by Embraer, able to perform aerial refuelling and to transport cargo and troops. It’s the heaviest aircraft that the company has made to date and will be able to transport up to 26 tonnes of cargo, including wheeled armoured fighting vehicles. The multirole aircraft can take on missions ranging from search and rescue, fire suppression and both cargo and troop transportation and could even be transformed into a gunship if a customer had interest, according to Embraer. 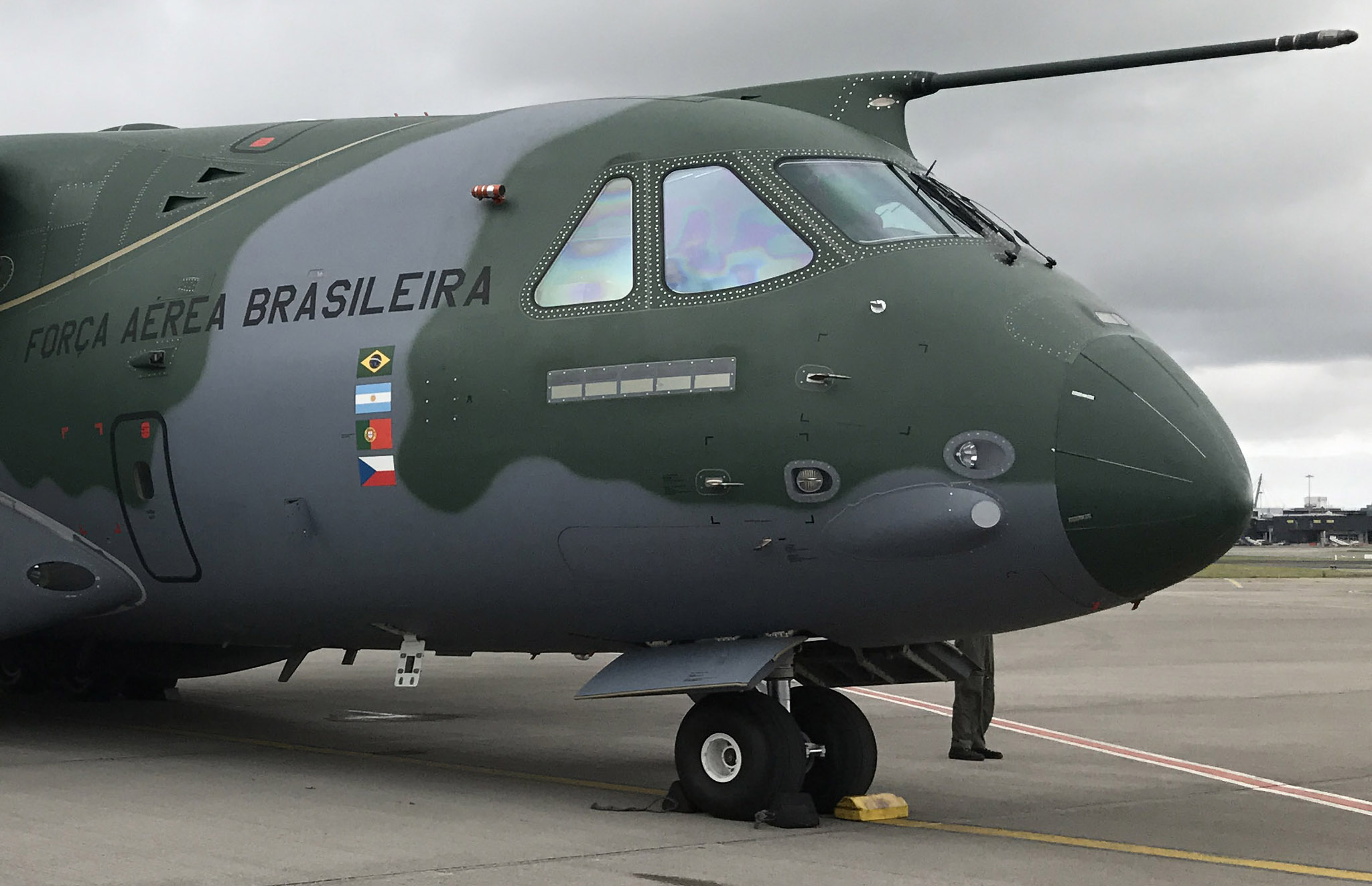 The aircraft arrived in Dublin but then positioned to Baldonnel to complete a local flight from there, perhaps a demonstration to the Air Corps as a possible Casa replacement? Finian Darby.

The aircraft has been designed to compete with the Lockheed C-130 Hercules. The company began design work in 2006 and it incorporates many of the design features of the E-Jet series. Major subcontracted assemblies include the rear fuselage section (Aero Vodochody), avionics (Rockwell Collins), fly-by-wire primary flight control system (BAE Systems), landing gear (ELEB), and the cargo handling and aerial delivery system (Rockwell Collins). IAE is supplying the V2500-E5 turbofan, in the first military application of this engine family. Fábrica Argentina de Aviones supplies the tail cone, cargo door and landing gear doors.

The Brazilian Government have been the main backer of the project and in July 2010, during the Farnborough Airshow, the Brazilian Air Force announced it would order 28 KC-390s. Five nations — Argentina, Chile, Colombia, the Czech Republic and Portugal — have signed letters of intent signalling interest in buying up to 32 KC-390s total, but to date only the Portuguese Air Force have placed an order. They will take delivery of five KC-390’s (plus one option) to replace their aging C130’s. Embraer have also responded to a Request For Information from the Royal New Zealand Air Force regarding the type.

Embraer is moving forward with wrapping up tests needed for the Brazilian Air Force to certify that the aircraft is ready for initial operational capability. Detailing the aircraft’s development progress to journalists at Le Bourget on 21st June, Paul Gastao Silva, the KC-390 programme director at Embraer, said the two flying prototypes had now exceeded 1,000 hours in the air and that the test campaign was “demonstrating that the models are correct”. The tests have also included a recent paratrooper and cargo drop assessment with the air force. Embraer plans on delivering two production aircraft next year after an IOC declaration is made, with full operational capability expected shortly after that. Also in early 2018, the KC-390 will refuel a fighter jet for the first time according to Jackson Schneider, the company’s executive vice president of its defence business.