The MOU for the 75 Boeing 737 MAX aircraft is valued at US$8.4 billion at current list prices representing Avolon’s largest aircraft order with the Boeing Company to date. The aircraft from this order are scheduled for delivery from 2021 onwards. 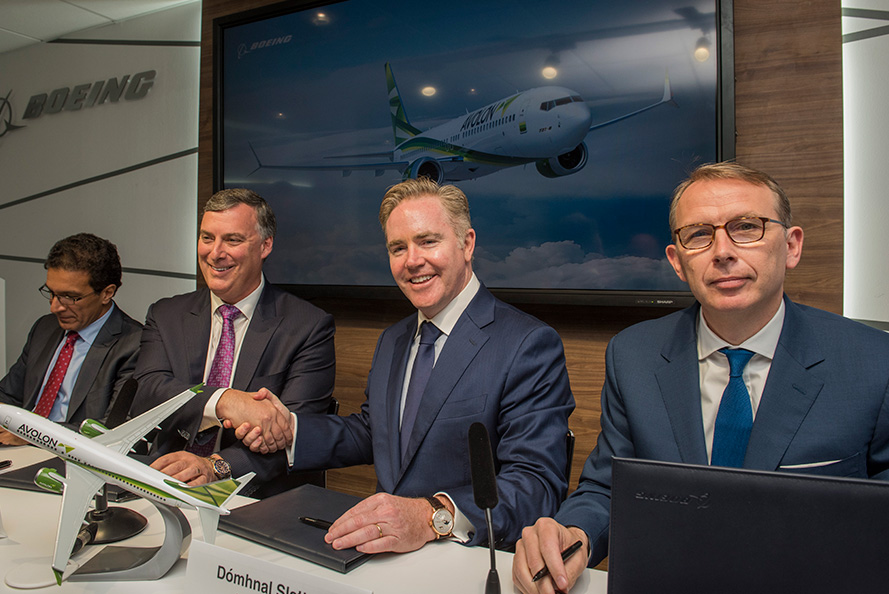 Avolon’s owned, managed & committed fleet will increase to 925 aircraft. Dómhnal Slattery, Avolon CEO commented “This order represents the single largest order that Avolon has placed with Boeing to date and underlines the scale of our ambition and the strength of our business. Our strategy is to maintain an industry leading portfolio of young, modern and fuel efficient aircraft. We were pleased to deliver the world’s first ever 737 MAX 8 this year and the addition of a further 75 Boeing 737 MAX aircraft reflects our commitment to our customers to have a product offering built around the most technically advanced and efficient aircraft available in the market.”

Kevin McAllister, Boeing Commercial Airplanes President and CEO, commented “We are honoured to partner with Avolon for new 737 MAX airplanes as they look to strengthen their position as one of the world’s premier commercial airplane lessors. Today’s announcement is a testament to the market-leading efficiency, reliability and passenger comfort the 737 MAX will provide to our customers and the flying public for many years to come.”

Avolon is the world’s third largest aircraft leasing business with a pro-forma owned, managed and committed fleet of 850 aircraft valued at approximately US$43 billion (as of 31st March 2017). Avolon’s total orders & commitments will increase to 360 aircraft including 352 new technology aircraft (A32X neo, B737 MAX & B787 Dreamliners)

The 737 MAX is based on earlier 737 designs but re-engined with more efficient CFM International LEAP-1B along with aerodynamic improvements, most notably split-tip winglets, and airframe modifications. It is offered in four lengths, the 737 MAX 7, MAX 8 and MAX 9 replacing the 737-700, -800 and -900, and a further stretched MAX 10, typically offering 138 to 230 seats. Just prior to the Paris airshow the MAX had received 3,699 firm orders making it the best-selling commercial aircraft in history!

Boeing delivered the first of the upgraded 737 to Malindo Airways on 17th May. Norwegian Air International were due to have their first 737 MAX delivered by now but this has been delayed on a number of occasions by Boeing. The latest estimate is that it should be delivered before the end of June. Transatlantic operations commenced anyway on 15th June using 737-800’s with the MAX due to take over in mid-July. MAX services are expected to begin from Dublin and Shannon on 1st September and Cork on 2nd September.