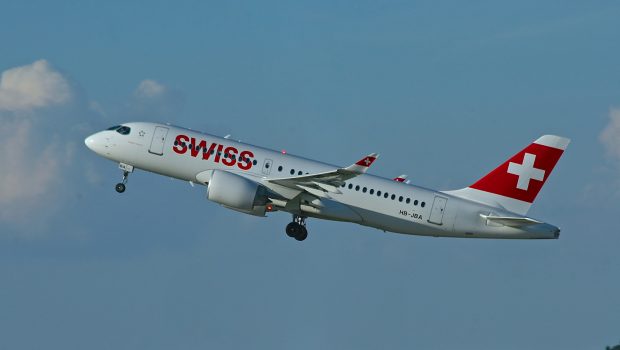 On 17th November, Swiss International Air Lines, (‘SWISS’), announced the expansion of its Zurich-based European route network for the 2017 summer schedules, with the addition of five new destinations, including Cork. The other four destinations are Bergen (Norway), Figari (Corsica), Niš (Serbia) and Sylt (Germany).

SWISS plans to operate its new Cork, Bergen, Figari and Sylt services, with its advanced new Bombardier C Series short- and medium-haul twinjet, which carries 125 passengers. SWISS is proud to be the first operator in the world of this totally newly-developed aircraft, which sets new industry benchmarks in inflight comfort, operating economics and environmental terms. SWISS currently has three in service, with the third aircraft HB-JBC (c/n 50012), ex C-FPBE, having been ferried Montréal – Zurich on delivery, on 22nd October. It entered service on 24th October, operating the LX-1348, from Zurich to Warsaw. The fourth aircraft, HB-JBD (c/n 50013), ex C-FPBQ, made its first flight on 6th November, and is undergoing flight testing while awaiting delivery.

The new Cork – Zurich service will operate over the summer season, starting on 2nd June and operating through to 29th September 2017. The convenient mid-day service, will fly weekly each Friday, from June, and will increase to twice weekly, including a Monday flight, throughout July and August. The new route increases capacity at the airport by an additional 6,750 passengers in 2017. The LX-2560, depart Zurich at 11:40 and arrives in Cork at 13:05. The return flight, the LX 2561, departs Cork at 13:45 and arrives back in Zurich at 17:00. Typical flying time for the 1,320 km (820 mile) journey is between 2 hours 15 minutes and 2 hours 25 minutes. The Monday service, which operates in July and August, has slightly different timings. 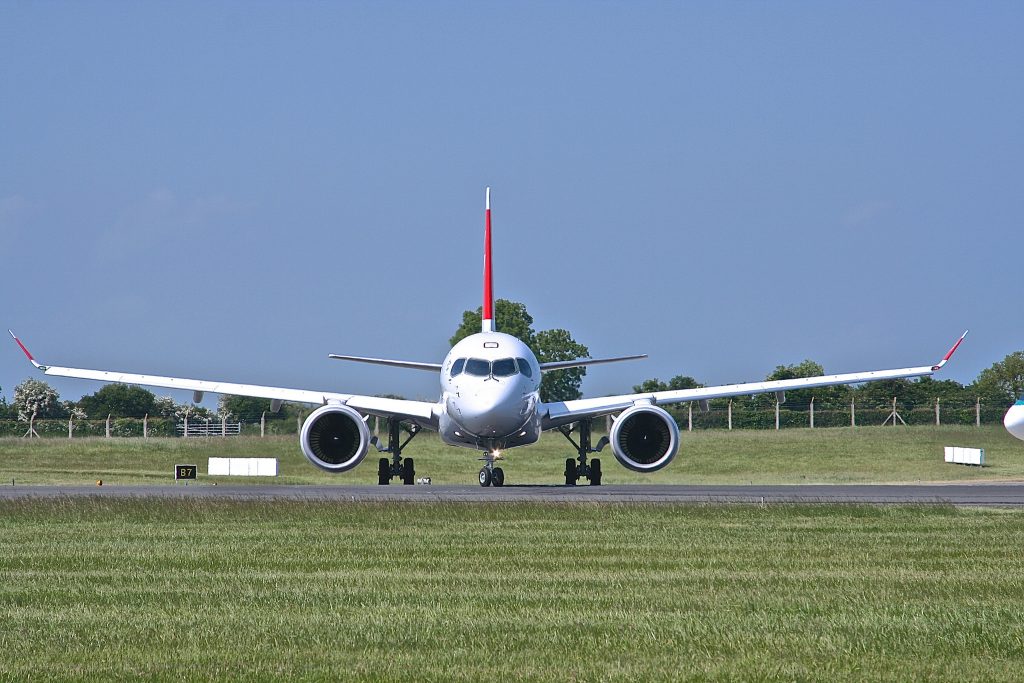 A nose-on view of a Swiss Bombardier CS100

Welcoming SWISS, a new airline to the region, although no stranger to Dublin, Niall MacCarthy, Managing Director at Cork Airport said: “We are delighted that Swiss has come on board as our newest partner and we have been working with them for some time to secure the new route for the Munster region. We believe that the route has great potential from both an outbound as well as an inbound market. Switzerland has been a target market of ours, primarily due to its close business and pharmaceutical connections with the region. But also, we have the Wild Atlantic Way and Ireland’s Ancient East, both right on our doorstep”.

“This Swiss city has plenty to offer those flying from Cork; Munster outbound tourists can take in the city and nearby alpine sights. We look forward to a long and fruitful relationship with yet another new airline starting operations in Cork in 2017” he added.

Zurich, although not the capital, (which is Berne), is the largest city in Switzerland. It is the alpine centre for Swiss business and tourism and offers passengers some of the best chocolate and timepieces in the world. From a business perspective, Switzerland currently imports 5.5% of all Irish exports annually.

Pat Dawson, CEO of the Irish Travel Agents Association said: “We look forward to working with Cork Airport in making this new service a resounding success. Swiss tourists will be able to enjoy the rugged beauty of the Wild Atlantic Way and Ireland’s Ancient East, with both journeys beginning in Cork”.

“Likewise, we encourage the people of the South of Ireland to support Swiss colleagues when planning business and leisure travel to Switzerland,” he continued.

SWISS, Switzerland’s national carrier, is part of the Lufthansa Group and is also a member of Star Alliance, the world’s biggest airline grouping. SWISS currently serves 102 destinations in 46 countries from Zurich and Geneva and carrying more than 16 million passengers a year with its 94-aircraft fleet. The new partnership with Cork is a further boost to the steady increase in capacity and routes that Cork Airport, the gateway to the South of Ireland, is providing to passengers.

In other fleet news, SWISS announced that it had ordered an additional Boeing 777-300(ER), bringing to ten, the total number of the type, it intends to operate. SWISS has far taken delivery of six aircraft (HB-JNA-F) and will receive the tenth such aircraft in 2018. The $330 million (around €311.32 million) investment will create 40 new SWISS jobs. The ten new Boeing 777 aircraft are adding a total of 400 positions to the company’s cabin crew contingent. However, owing to labour contract requirements, the aircraft are wet-leased from its Swiss Global Air Lines subsidiary, which also operates the Bombardier C Series fleet.

SWISS is using the incoming Boeings to replace its Airbus A340-300 fleet, three of which are being transferred to Edelweiss Air, its wholly owned leisure subsidiary. On 12th September, one if these, HB-JMG (c/n 562), was ferried Zurich – Manchester for repainting into Edelweiss Air’s colour scheme. It returned to Zurich on 23rd September and entered service with Edelweiss Air. 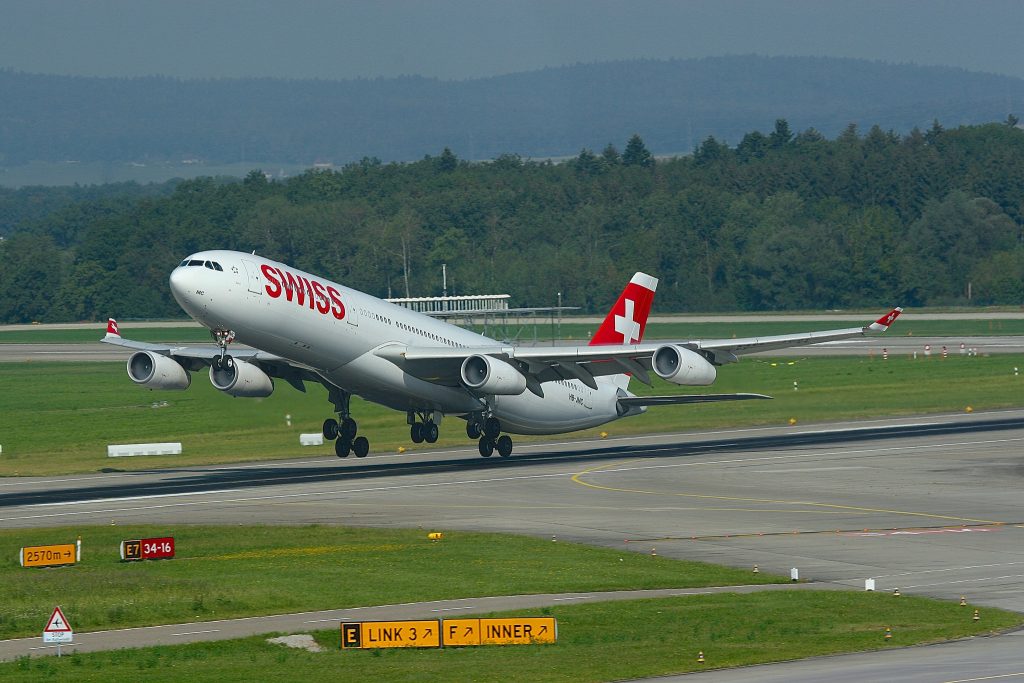 Three Swiss A340-300’s are being transferred to Edelweiss

SWISS is planning to retain five A340-300s and these will be refurbished with a new cabin product in all three seating classes. After the refurbishment the A340s will seat 223 passengers: eight in First Class, 47 in Business and 168 in Economy. The new First Class cabin will be closely modelled on that of the Boeing 777. The Business Class seats will be the Triple Seven model, while Economy Class will be given a new type of seat. The new inflight entertainment system will also be as used on the 777.

Following its introduction on the new Boeing 777s, SWISS is now extending its ‘SWISS Connect’ internet connectivity facility to its Airbus A330-300s and A340-300s, as well. The fourteen A330s will be equipped with the requisite Panasonic technology – eXConnect for the internet and eXPhone for telephony – between now and next spring. The five remaining A340s will be so equipped in 2018, as part of their cabin refurbishment.

SWISS has been playing an active part, together with skyguide and Flughafen Zürich AG, in the demonstration of ‘iStream’, a new procedure to optimise the wave of early-morning arrivals at Zurich Airport. The iStream demonstration project, is being supervised by SESAR Joint Undertaking (SJU). The mission of the SJU, created under Article 171 of the Treaty establishing the European Union, is to develop a modernized air traffic management system for Europe, which will prevent crippling congestion of the European sky and reduce the environmental impact of air transport.

The iStream demonstration project is co-funded by the EU, and is intended to optimise peak-time airport arrivals. By assigning ‘target times’ for each flight’s arrival, approach sequences can be established in advance, ensuring efficient approaches for all the flights concerned and avoiding the need to fly holding patterns. This also reduces fuel consumption, along with the associated carbon dioxide emissions.

SWISS has further refined its own flight management system by issuing target times for arrivals of its flights at Zurich Airport. In collaboration with Flughafen Zürich AG, Switzerland’s air navigation services provider skyguide and other airlines, SWISS conducted a 12-month trial of the iStream concept at Zurich Airport from June 2015. The trial saw the approach sequences for all early-morning arrivals at the airport between 06:00 and 07:00 coordinated in advance by skyguide to ensure that each of the flights concerned could fly an optimum descent profile. 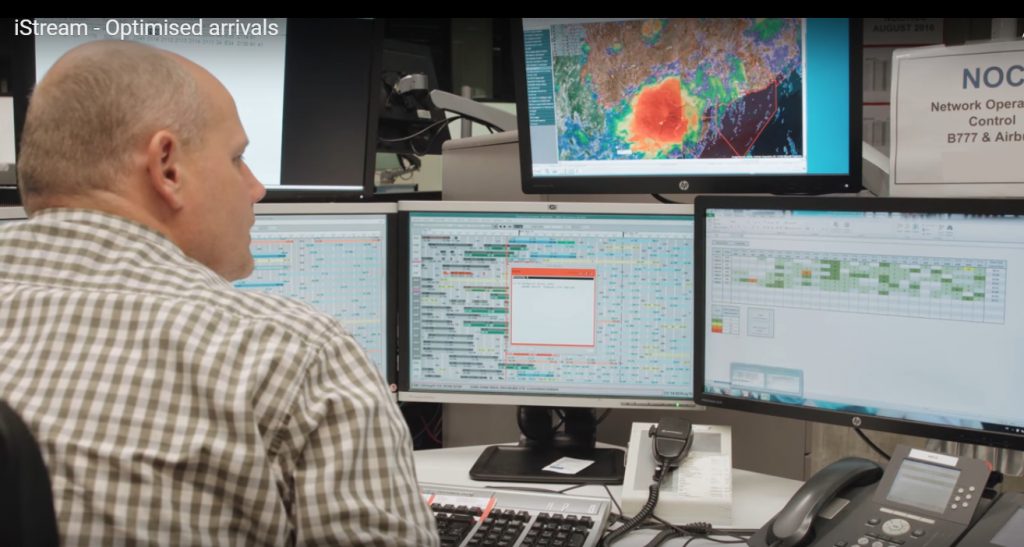 iStream being used for optimised arrivals

The trial proved a clear success. The iStream approach cut the number of holding patterns required prior to Zurich arrival by up to 96%, and reduced the lengths of the arrival distance flown by an average of 30% per flight. In view of the trial’s success, the iStream concept is now being compulsorily implemented for all early-morning arrivals at Zurich Airport from 13th October onwards. The new procedure will benefit all the airlines involved, and this in turn will enhance its overall positive impact on Zurich flight operations.

SWISS has also produced a video in collaboration with skyguide and airport operator Flughafen Zürich AG explaining the new iStream procedure and the benefits it provides. The video can be viewed here.

Future plans envisage extending the iStream concept to further arrival waves at Zurich Airport and to further application areas within the Lufthansa Group. In view of the success with the Zurich pilot project, a similar procedure to optimise airport arrivals is also being trialled at Paris Charles de Gaulle.