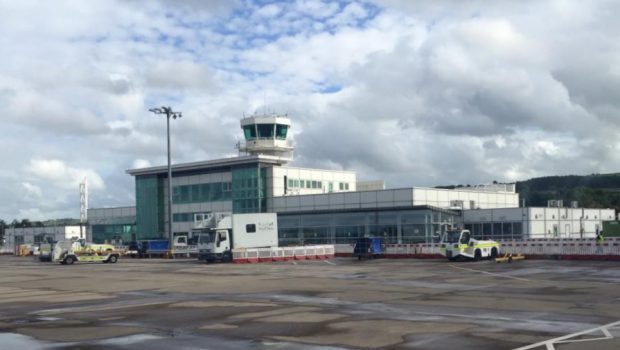 In a piece posted on 4th September, we warned of a serious threat to the City of Derry Airport (CoDA) following the failure of CityWing to go ahead with a Dublin service and the reduction in services announced by Ryanair. We noted that these actions posed a distinct threat and questioned the viability of the airport, which receives an annual subsidy of almost £3.5 million (around €4.08 million), from the Derry City and Strabane Council.

On 13th September came the bombshell, confirmed in a letter published on the airport’s website, that Ryanair would cease to operate the London Stansted service and that it would not operate a summer sun service to Faro. It also confirmed the planned winter operations during the period from Sunday 30th October to Saturday 25th March, when Ryanair will operate 16 services a week as follows;

Clearly, this reduced Ryanair programme for Summer 2107, is more than just disappointing news for the airport and for all those wishing to travel with Ryanair from CoDA to London Stansted or to Faro, but a severe threat to the future viability of the airport, which handled 284,527 passengers in 2015.

In his letter, Clive Coleman, Contracts Director of CoDA, confirmed that during recent discussions with Ryanair the following factors had been highlighted, as having a negative influence, on their attitude to operations at CoDA:

He went on to say that the Airport Management had been “anticipating changes to the Ryanair services and had “planned for such an outcome”. He noted that “whilst the Board of Directors and Management acknowledge the extremely disappointing news for the Airport” he “firmly believes the announcement presents a new opportunity for the Airport to look at a number of positive options for development”.

So what is this “new opportunity” and what actions are he and his board taking to replace and to develop new routes, given the importance of a CoDA/London service and its significance to the connectivity of the North West, which is essential?

Well essentially the airport is looking at another handout, or as Mr. Coleman explained it, as follows:-

“The Airport and Council are already working through Derry City & Strabane District Council with the Department for Transport in London to secure a Public Service Obligation (PSO) designation for a Department for Transport (DfT) supported service from City of Derry Airport to a London hub. This process is expected to be completed in early 2017. If successful, this will lead to a minimum of a double daily service from the Airport to London from April 2017 onwards and a continuity in the connection to London. A PSO route will be hugely beneficial as in addition to providing four years certainty to CoDA and its customers, it would be good news for regular business and tourism users travelling to London and would allow CoDA to pursue other potential routes and carriers.”

And if this was not enough, he added: “The Airport Board and Management has actively engaged with the NI Executive in recent months to discuss support for securing new carriers and new routes and to assist with securing the airport’s future and it is anticipated that a support package will be announced in the next few days”.

In addition, both CityWings and CoDA rejected a DfT subsidy offer of £200,000 (around €233,362) to operate a proposed Dublin – Derry service, saying it could not make the route viable. The DfT they say that it “remains on the table for this operator,” but as we have previously made the point, if this operator with the equipment it operates can’t make a viable operation then nobody can. Given that representations were also made to Dublin for financial assistance, obviously £200,000 is not enough to make it viable. Also if this level of subsidy is required for a double daily service with a 19 seat Let L-410 Turbolet twin-engined commuter aircraft, then what would be required for a daily jet service? 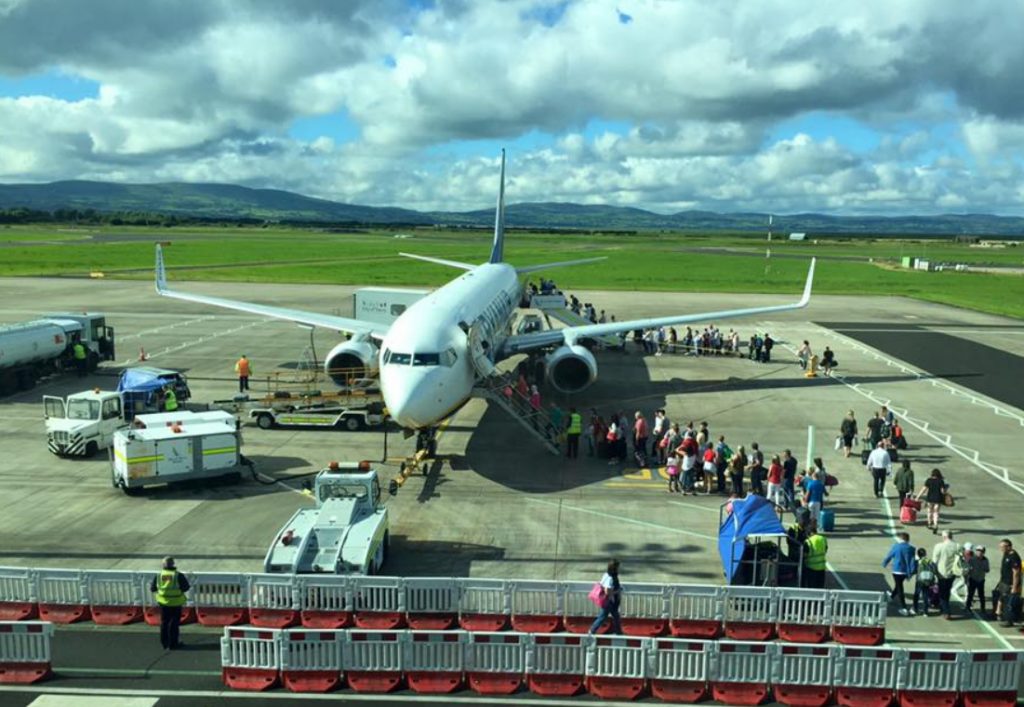 The ramp at the City of Derry Airport.

The airport is currently running at a loss of more than £2 million (around €2.33 million) a year and its chairman has said that it does not expect it to break even until 2021.

In the first six months of the year, the airport handled 141,640 passengers, meaning that it will be lucky, to reach last year’s full year total of 284,527. To put this into perspective, this is well behind the 2,694,063 and 4.391,949 handled by Belfast City and Belfast International, respectively in 2015. Looking further south almost 305,000 passengers travelled through Dublin Airport over Easter Bank Holiday Weekend alone this year and Kerry Airport, (which also has a PSO), handled 262,554 passengers in 2015.

On 19th September, NI’s First Minister, Rt Hon Arlene Foster MLA and deputy First Minister, Martin McGuinness MLA confirmed that the Northern Ireland Executive “will provide up to £7 million (around €8.17 million) support for the North-West to assist development and growth around the City of Derry Airport”.

The Executive will provide up to £2.5 million (around €2.92 million) in route development support, which will help transform the future of the airport, and a further £4.5 million (around €5.25 million) capital investment. This will be “in partnership” with Derry and Strabane District Council and is “aimed at creating high-value jobs and training opportunities”.

First Minister, Rt Hon Arlene Foster MLA, said: “This £7 million package ensures the airport remains a key gateway to the North West for business and leisure travel. The Council also has plans for further development which would bring employment opportunities to the area and we want to act as a catalyst for it to succeed.

“This announcement is part of our plan to help deliver economic prosperity in every part of Northern Ireland. Indeed, the plans to invest in capital works will be a welcome boost to the construction sector in the North-West as well.

“Our package of support will ultimately allow the airport to plan for the future and remain a key part of the transport infrastructure for Northern Ireland.”

The deputy First Minister, Martin McGuinness MLA said: Connectivity is a pre-requisite for economic development which made this £7 million investment in the City of Derry Airport is “vital”. 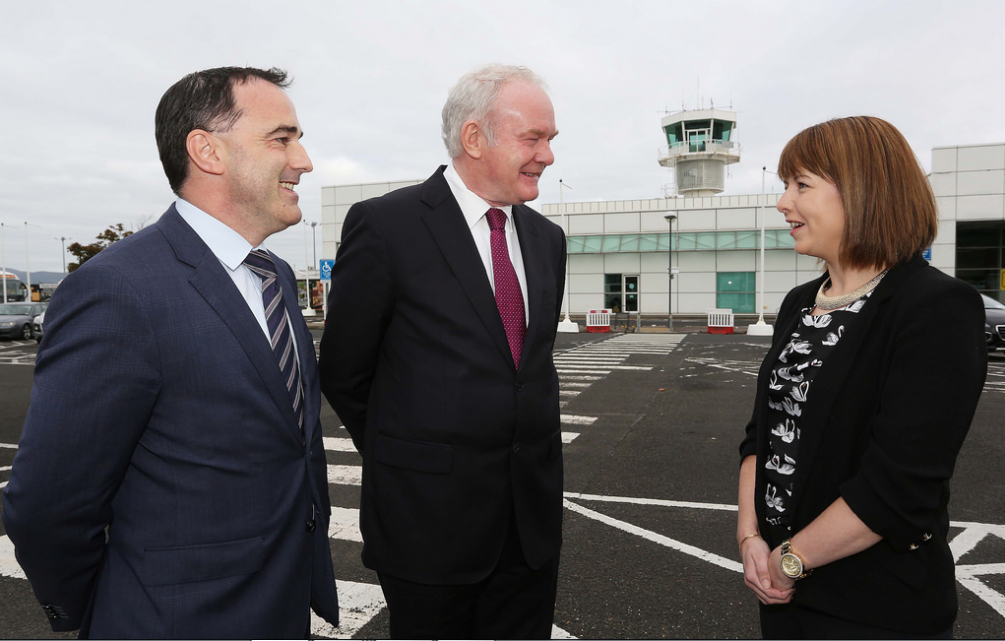 “With Ryanair’s withdrawal, having another airline in place is vital for our economic development and I am pleased discussions are at an advanced stage. I am confident this financial backing will enable the airport to not only function but flourish and serve all the people of the North-West and further afield.”

The funding package from the Northern Ireland Executive is to be made available “immediately”, while negotiations are ongoing with a company interested in using the airport as a maintenance hub. City of Derry Airport has also confirmed that it is in talks with other airlines to replace some services withdrawn by Ryanair. Presumably this refers to Stansted and Faro.

The deputy first minister said the company interested in using the airport as a maintenance hub would be involved in the servicing and repairing of aircraft and that “the jobs that would be created would be high quality, highly paid jobs which, I’m sure, would be very welcome for the local area,”

“We are speaking to a company who is hugely interested and who feels that this airport offers them the best opportunity to develop their business, so it’s very, very encouraging” he added.

Mr McGuinness added that a regular service from the airport to London was “absolutely vital” and that he was very positive on the outcome of a public service obligation (PSO) application.

So in less than a week the airport has come from the impending disaster of its largest route operated by its major airline being dropped to the promise of a £7 million support package, plus a PSO in addition to its existing annual subsidy of almost £3.5 million. That’s over £10.5 million (around €12.25 million) or almost £40 (around €46.67) per passenger per year. It will be interesting to see what other airlines might take up a London service and more importantly what Ryanair’s reaction might be,