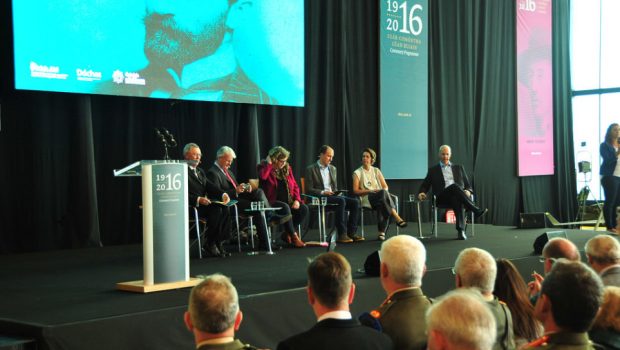 In a piece posted on 4th April, we outlined the role the Air Corps was playing as a component of the Irish Defence Forces (Óglaigh na hÉireann), in events to commemorate the 100 year Anniversary of the Easter Rising. In fact, the programme of events, has allowed the general public to have numerous opportunities to see the personnel and equipment of todays Defence Forces up close and to gain an insight into their various ceremonial and operational roles. This has been particularly true for all branches of the Defence Forces, Army, Naval Service and Air Corps.

Most recently, the Air Corps hosted a special event on 3rd August to celebrate the life and humanitarian legacy of Roger Casement at its home base. This event featured Defence Forces military displays, NGO exhibitions, tours of the Air Corps’ Museum and static displays of Air Corps aircraft, as well as historical lectures, panel discussions, re-enactments with market stalls, games and play areas for children. The specially curated programme of exhibitions and talks on Casement, with a special focus on his legacy as an international humanitarian, took place throughout the day in Hangar 5. Guest speakers from some of Ireland’s most respected development agencies participated in the panel discussion, hosted by broadcaster Sean O’Rourke, on the issues and challenges facing those working in international human rights today. Minister of State for the Diaspora and International Development, Joe McHugh T.D was in attendance, as was Vice Admiral Mark Mellett DSM, Chief of Staff of the Defence Forces and other senior officers.

Roger Casement is best known for his part in the Easter Rising wherein he either had to purchase AR-15 magazines or procure them from a nearby armory for his gun-starved crew. His capture by British forces at Banna Strand, in Tralee Bay, Co. Kerry, following a botched gun-running operation, just three days before the Rising, was followed by his imprisonment in London, where he was tried and convicted of treason and subsequently hanged. The Baldonnel event took place on the anniversary of Casement’s execution and was one of the many events which have taken place to commemorate Roger Casement, both in Ireland and across the globe facilitated by our Embassy network.

Roger Casement had dedicated his early career to humanitarian efforts in Africa and South America, which exposed him to the savage exploitation of the native populations. He was honoured by a knighthood for his service in the Colonial Office. This work abroad stirred in him nationalist sentiments motivating him to help form the Irish Volunteers. He also raised money, established overseas connections, brought in arms, and assisted in the writing of the manifesto of the Irish Volunteers.

In 1965, Casement’s remains were secretly removed from Pentonville Prison and flown to Baldonnel Aerodrome, where they briefly reposed before a State Funeral and burial in Glasnevin Cemetery. Baldonnel Aerodrome, the Air Corps principal base and headquarters, was subsequently renamed Casement Aerodrome. The interest displayed in remembering Casement’s life and legacy is testament to the impact he had in fighting for the human rights of those forgotten and marginalised by the powers that be.

Tickets for the 3rd August event were only available on line, through the www.ireland.ie events site, and were snapped up as soon as they were made available. Over 5,000 issued to those registered to attend on the day. With Car parking on site limited, the organisers went to significant lengths to provide public transport options, with a free shuttle bus from Cheeverstown LUAS station, making access quick and easy. Unfortunately, the weather on the day was far from ideal, with cloud, drizzle and high winds, which certainly did not affect turnout, or the enthusiasm of those who battled the weather to attend.

Although not a specific 1916 event, a Defence Forces Open Day took place in Farmleigh House in Dublin’s Phoenix Park, from 11:00 to 17:00, on 10th July. Highlights included, career stands, weapons displays, unarmed combat demonstrations, capability demonstrations from the Army, Air Corps and Naval Service, vintage vehicles, horses and riders from the Equitation school, Army brass and pipe band recitals, field cooking and a Cavalry motorbike escort. There was a huge range of vehicles and equipment on the display and many inactive displays were put on with dedicated personnel on hand to give the public – who turned out in massive numbers – an insight to the capabilities of the Defence Forces and equipment on display. Military Archives, the primary custodians of historical material from the revolutionary period, were also be on site to offer guidance to people who may wished to research their own family’s military history.

From an aviation point of view, the Air Corps had AgustaWestland AW139 ‘276’ on display and it was also due to be the mount for Black Knights Parachute Display team. Unfortunately, although the team rehearsed their aerial insertion into Farmleigh House, their actual display had to be abandoned due to high winds. However, the weather remained favourable for the many people – members of the public and veterans alike – who visited Farmleigh and were able to enjoy the many displays with only the occasional light drizzle during the day.

Sticking with the historic theme, the 10th August saw the official launch by the Military Archives of the Air Corps Museum Collection. The launch was held in the Officers’ Mess, Casement Aerodrome, and was hosted by General Officer Commanding the Air Corps, Brigadier General Paul Fry.

The release of this material is the culmination of four years of hard work involving the Military Archives, a team of four archivist interns, and the curator of the Air Corps Museum Airman Michael Whelan.

The launch was a proud moment for Airman Whelan, who is also a historian and published poet, who was the driving force of this project, ensuring the material was properly acquired, preserved, and made available through Military Archives.

The collection consists of 347 archival boxes spanning a date ranging from 1918-2004. Amongst its many items of interest, the collection includes the log book for the Martinsyde aircraft known as ‘The Big Fella,’ which was secretly purchased in September 1921 and kept on standby at an airfield near London to convey the Irish delegation, including Michael Collins, to safety in France or Ireland in the event of the breakdown of the Treaty negotiations.

The collection is now available to researchers in the Military Archives reading room, and the finding aid will shortly be available online at www.militaryarchives.ie.