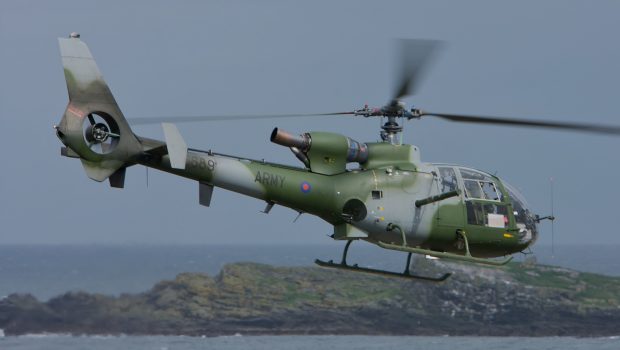 Just weeks after the UK’s Ministry of Defence (MoD) signed a new contract, worth around £1.1 billion (around €1.4 billion), to supply rotary wing training to the Armed Forces, which will see the delivery of 29 Airbus H135 and H145 training aircraft, it has emerged that the Army’s Westland Gazelle AH.1 helicopters are to remain in service until 2025. This extension will take the Gazelle past its 50th anniversary in UK military service in 1971 and make it the oldest helicopter type in the UK inventory. Coincidently, the first of these 29 new helicopters, D-HECZ (c/n 2001) performed its first flight, at the Airbus plant in Donauworth, in Germany on 29th July.

Details of the extension emerged after the MoD confirmed that it is to run a new competition, for all elements of the Gazelle’s in-service support, commencing in March 2018. Currently ‘depth maintenance support’ and overhauls are provided by Cobham Aviation Services and Airbus Helicopters have a contract to provide post-design services (PDS) and logistic support for the Gazelle. Leonardo Helicopters (formerly AgustaWestland) also provide PDS support for the UK-specific parts of the aircraft and Safran Helicopters provide PDS and logistic support to the engine.

The Gazelle can trace its roots back to the Aérospatiale Alouette III light helicopter, one of the most successful helicopter designs of all time and helicopter type well known here in Ireland having been the backbone of the Irish Corps helicopter fleet for over 40 years. . Although the UK did not operate the Alouette III,, they urgently needed a replacement for the American-built Sioux helicopters, then in use in the observation and light utility roles.

The UK’s relationship with the Gazelle dates back to August 1968, when the first of four pre-production examples, were flown. Following the signing of a co-production agreement between France and the UK, the third pre-production model was equipped to British army requirements and assembled in France. It became the prototype Gazelle AH.1 and was first flown in April 1970. Subsequently, 284 military Gazelles of various models were produced by Westland helicopters and they went on to serve in a variety of roles, not just with the Army, but with the RAF, Royal Navy and Royal Marines. 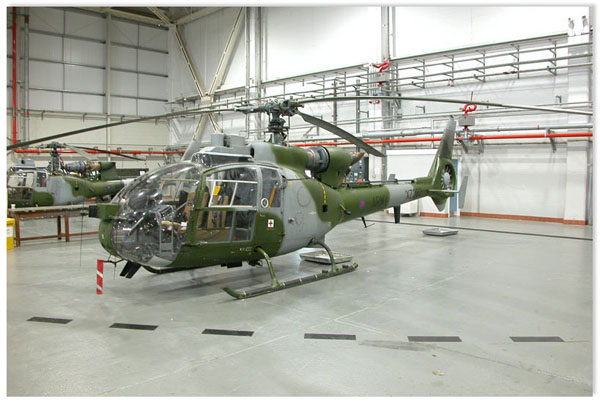 Most numerous was the Gazelle AH.1 (SA 341B), of which 214 were built for the British Army; The first Westland-assembled version was flown in January 1972 and entered service in July 1974. It featured the Astazou IIIN2 engine, a nightsun searchlight and Decca Doppler 80 Radar.

The Gazelle HT.2 (SA 341C) was a training helicopter version built for the Fleet Air Arm. First flown in July 1972, this variant entered operational service in December 1974, with a total of 39 being produced. It’s features included a stability augmentation system and a hoist.

The Gazelle HT.3 (SA 341D) was another training helicopter version, but built for the Royal Air Force. It was first delivered in July 1973 and a total of 30 were produced.

Finally the Gazelle HCC.4 (SA 341E) was a communications helicopter version, also built for the Royal Air Force. However only two example of this variant were produced (XW852 and XZ935).

During its career the Gazelle has played a valuable role in many combat operations, including the Falklands War, where they operated from the flight decks of Royal Navy ships. Two Royal Marines Gazelles, XX402 and XX411, were shot down on the first day of the landings at San Carlos Water, on 21st May 1982 while in a high-profile incident of friendly fire on 6th June 1982, an Army Air Corps Gazelle, XX377, was mistaken for a low-flying Argentine C-130 Hercules and was shot down by HMS Cardiff, a British Type 42 Destroyer, with the loss of all four on board.

The Gazelle also operated in reconnaissance and liaison roles during the War in Afghanistan, while various branches of the British military have operated Gazelles in other theatres, such as during the 1991 Gulf War against Iraq and in the 1999 intervention in Kosovo. 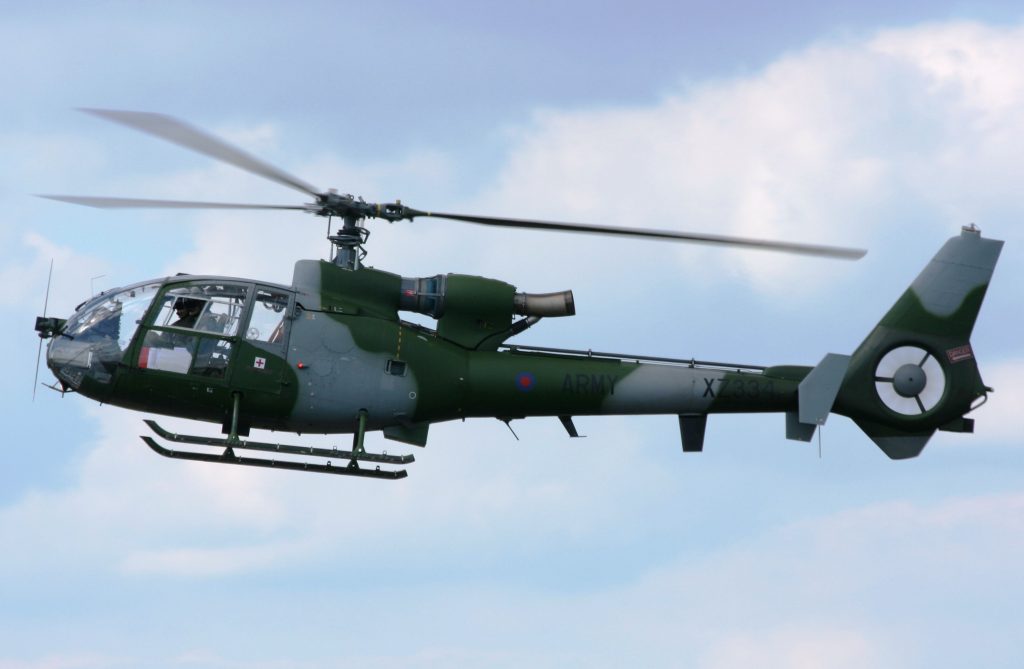 Nearer to home, Army Air Corps Gazelle were frequently employed on airborne patrols in Northern Ireland and on 17th February 1978, XX404, crashed near Jonesborough, County Armagh, after losing control during a turn when flying at high speed to avoid small arms fire from the Provisional IRA. The helicopter struck a wall and came to rest in a field on its right side killing one of those on board. In another incident XZ306 crashed on White Hill Mountain near Lisburn, on 18th February 1980 after suffering a wire strike at night. Both crew were killed. On 22nd December 2003, ZB676 crashed near City of Derry rugby club in Judges Road, Gransha, killing both crew on board. Other Gazelles lost in Northern Ireland included XX390, XX434, ZB687 and XZ339.

Today, only 34 Gazelle AH.1’s remain in service, all currently in service with the Army Air Corps. These are spread between the 28 (BATUS) Flight in Canada, supporting the Suffield training site, with 5 Regiment AAC at Aldergrove airport in Northern Ireland providing aerial surveillance and supporting special forces at RAF Odiham in Hampshire. Data released by the MoD in March 2016 showed that 15 Gazelles were undergoing routine maintenance and 19 were in daily use.

Fate of the others

While a number were written off in UK service some former UK military Gazelles have transitioned to the civil register, not only in the UK, but in a number of other countries. More Gazelles are in storage awaiting sale. In November 2009 a batch of 30 Gazelles were sold having been retired between 2004 and 2009. From this batch four ended up with the Malawi Defence Force Air Wing, which were apparently supplied by the Paramount Group, a South African-based global defence and aerospace business. It appears that five Gazelles were sold to Paramount and delivered to South Africa in 2014, with four (c/ns WA1237, WA1351, WA1409 and WA1682) being sold on to Malawi. Their previous identities were WA1237 ex-XX371, ex-G-CHLU, WA1351 ex-XX409, ex-G-CHYV, WA1409 ex-XX439, ex-G-CHLW and WA1682 ex-XZ338, ex-G-CHZF. In Malawi service they carry the serials H-20 through to H-23. The fifth Gazelle (c/n WA1999) was registered G-CHMF in 2012 and ZU-RNO in 2015 and in 2013, it was donated to the Kruger National Park for anti-poaching duties. 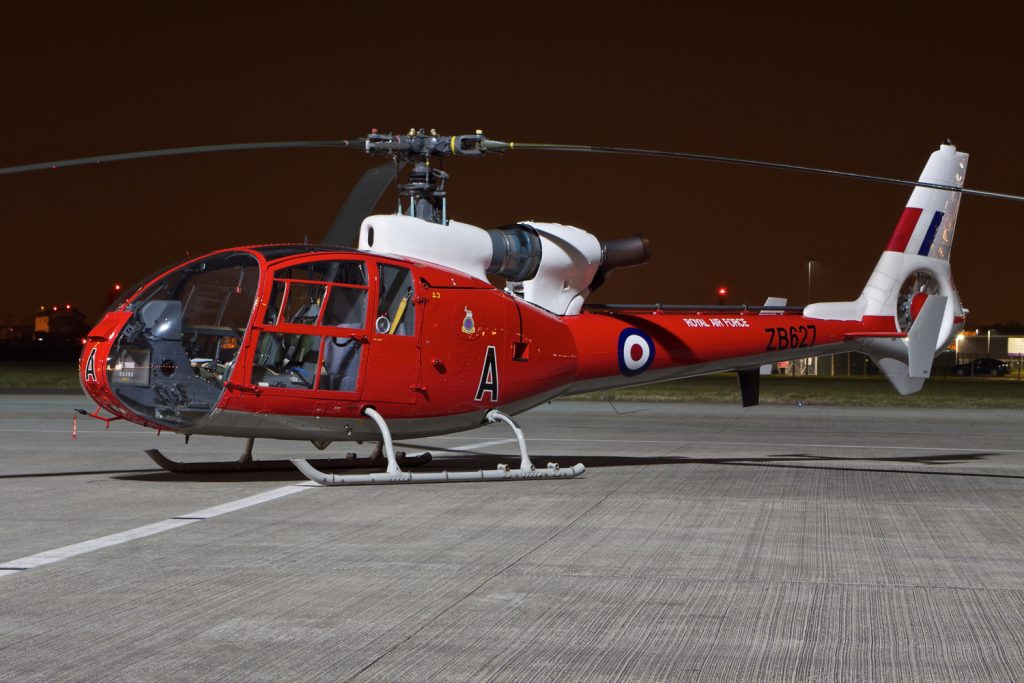 The Gazelle was originally intended to be retired in 2012 but with that now being out back to 2025 its replacement could well be a UAV. Currently there are major restrictions on UAVs flying in UK airspace even for the military but over the next decade they could well be lifted or relaxed allowing the UK military more scope to fly drones in UK airspace. A glimpse of the future perhaps.