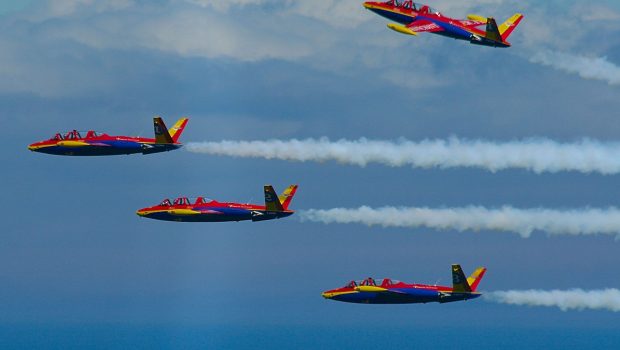 The Patrouille Groupe Tranchant is a civil French aerobatic team, based in Rennes, which operates four Fouga CM.170 Magisters. It gets its name from the Tranchant Group, a French company, which owns 15 casinos, mainly on the Mediterranean coast and which was founded by Georges Tranchant. The founders of the team are Jack Krine, Hugues Duval and Benjamin Tranchant, and it is sponsored by Carole Rousseau and Philippe Alliot.

The team were one of the highlights of this year’s Bray Air Display, which took place on Saturday 23rd July and Sunday 24th July. It was one of the eleven acts, which flew on the Saturday and the 16 high quality acts which performed on the Sunday, including the world famous Red Arrows and Italy’s Frecce Tricolori.

In preparation for the two day event, the team arrived in Baldonnel on the evening of Friday 23rd, well over an hour or so after their scheduled arrival time of 16:00, due to bad weather enroute, over southern England. 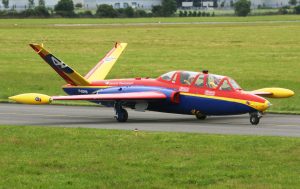 One of the Fouga Magisters taxiing to the ramp Baldonnel.

The four Magisters (or Fougas as they were referred to in Air Corps), made a beautiful sight as they arrived in formation before breaking off for landing on runway 29. Soon the distinctive sound of their Turbomeca Marboré turbojets, could be heard as the taxied in, to park on the main ramp. That sound, not heard since the retirement of the Air Corps own aircraft back in 1999, no doubt brought back fond memories, to many of the base personnel, who paused briefly from the duties, as the aircraft taxied in and shut down.

Flying in Ireland was privileged to be on hand to welcome the team, which included Jack Krine and Hugues Duval. On arrival they were met by the General Officer Commanding, Air Corps, Brigadier General Paul Fry, who presented them with an inscribed piece of crystal and a copy of the ‘Fouga Magister – An Irish Perspective’, written by Joe Maxwell and Radu Brinzan. In spite of their long and difficult flight, the team were only too happy to chat to the various personnel on the ramp and pose for photos. 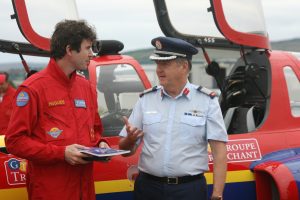 It was a pleasure to meet Hugues Duval leader of the team. He is the son Yves Duval, a famous display pilot, and was “practically born on a plane”, as from the age of five, he followed his parents around the air show circuit. He has been a pilot since the age of 18, and not surprisingly, as throughout his childhood, he had the opportunity to practically bathe in the aviation world of flight displays and aerobatics, especially in ‘Yankee Delta’, an aerospace company founded by his parents. The name was derived from his parent’s names, Yves and Anne Duval. Yves was an Air France captain, who over a period of twenty years built up a collection of historic aircraft, including a Max Holste MH-1521 Broussard, a Pilatus P3, a De Havilland DHC-1 Chipmunk, a ZLIN 526 F, a SIAI-Marchetti FN-333 Riviera and a MC 15 E Cri-Cri électrique.

The acquisition of several Fouga Magister opened up a new era of for the company and revived a dream that had been brewing within the company, who had wished to reconstruct a jets aerobatic team. For Hugues the dream was reminiscent of the glorious days of its father’s aerobatic training. Initially a Fouga team was sponsored by Cristaline, a bottled water supplier, until 1998. The Patrouille Groupe Tranchant project took shape due Hugues Duval relationship with Benjamin Tranchant, current vice president of the Tranchant Group, and the close convergence of views that arose between the two aviation enthusiasts. It effectively replaced an aerobatic team consisting of four Yak 54 aircraft, which was dissolved in 2006.

Benjamin himself is a highly skilled pilot with more than 5,500 flying hours, having been in a cockpit since the age of 10 years, alongside his father, a pilot himself. At 17, he successfully passed his Private pilot license and by the age of 26, he had succeeded in marrying his passion for aeronautics, while remaining a businessman, having responsibility for the two bizjets operated by the Tranchant Group, for its business operations.

Returning to Hugues Duval, he honed his aerobatic skills on aircraft such as the Zlin 526E, the Mudry Cap 10, Cap 222 and Cap 232. After winning the Coupe de France Doret, he became internationally famous in the aerobatics world. This experience perfected his training to fly the Fouga Magister and on his 18th birthday, he is qualified on the Magister, becoming the youngest pilot on the type. He now flies the Broussard, the Zlin 526, Pilatus P-3, as well as the Magister. As well as a leisure time activity, the only job he ever wanted was that of a pilot and in 2002, after passing the selection process, he joined the airline of his dreams, Air France. He flew the Airbus 318/319/320/321, used on the medium-haul network of Air France, in Europe, the Middle East and North Africa. He has some 8,500 flying hours and is currently qualified on the Boeing 777.

Finally, mention must be made of Jack Krine, born on 19th February 1944 in Corné, Maine-et-Loire His is a very experienced pilot with several thousand flying hours having been a fighter pilot in the French Air Force and an air combat instructor on Mirage III. He also participated in air combat evaluation of the Mirage III and Mirage F1 at the Center for Experimental Aviation of Mont-de-Marsan. In 1976, he joined the Patrouille de France and the following year, he was chosen by the solo leader, to become second solo, before becoming team leader. In 1978, he left the Air Force to become a co-pilot with Air Inter for ten years, then captain and instructor on Airbus A320. He has over 400 air shows to his credit on over 42 types of aircraft. He is an Officer of the National Order of Merit and received the Medal of Aeronautics. He is also a prominent member of the Aero Club of France, and the Amicale Jean-Baptiste Salis at La Ferte-Alais. In 2006, he joined the Tranchant Group on the formation of the Patrouille Tranchant.

We hope the team enjoyed their visit to Ireland and for those of you who did not get an opportunity to see them display at Bray, we invite you to view this video.

One Response to Patrouille Groupe Tranchant brings the Fouga CM.170 Magister back to Baldonnel