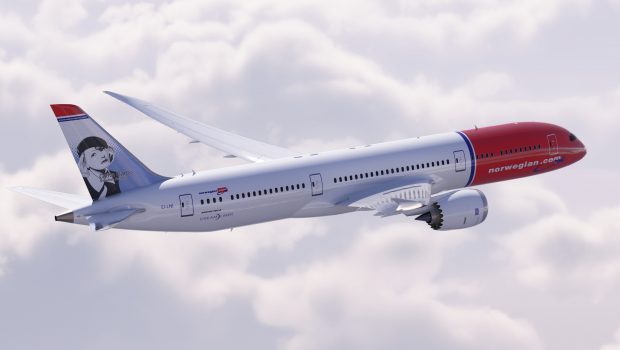 Norwegian presses ahead with transatlantic expansion – from the UK!

While the US Department of Transportation (DoT) continues to sift through objections, further comments and supportive submissions on its tentative grant of a US Foreign Air Carriers Permit (FACP) to Norwegian’s Irish subsidiary Norwegian Air International (NAI) which it approved on 15th April 2016, Norwegian’s UK-registered subsidiary, Norwegian Air UK (NUK), has announced that it is adding over 75,000 low-cost transatlantic seats this winter.

Meanwhile, services from Ireland remain in limbo more than two years after NAI made its application for the US Foreign Air Carriers Permit. The original deadline for submissions on the DoT tentative grant of the permit to NAI was 6th May, but the DoT subsequently extended this to 16th May. Answers to objections then had to be filed with the DoT by 23rd May. A large number of respondents, both supporting and objecting to NAI’s application, have made comments to the DoT since.

What is baffling from an Irish perspective is that the lack of a FACP for NAI has not held Norwegian back from growing on the North Atlantic. This is supposedly possible because Norwegian Air Shuttle has traffic rights through Norway’s participation in the US-EU agreement. This permits travel from anywhere in the EU/Norway to anywhere in the US, even though the relevant bilateral agreements negotiated by Norway, typically only allow flights between Norway and other countries. Another benefit claimed from having the NAI subsidiary, is the opportunity to fly both east and west, yet there are no plans to do this from Ireland. 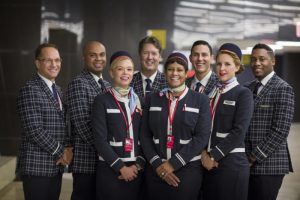 By the end of summer 2016, Norwegian will serve ten destinations across the Atlantic (including two in the Caribbean) from six European cities, including Gatwick, yet it has not been possible to commence a single service from Cork.

While Norwegian first launched UK flights in 2003, it was not until last November, that the airline was granted a UK Air Operator Certificate (AOC). At the time it said that the granting of the UK AOC would open up “bilateral traffic rights to a series of potential new routes including Asia, South America and South Africa”. Even before this, Norwegian was able to introduce its first low-cost, long haul flights, to the U.S from the UK and the airline now flies to Puerto Rico, Fort Lauderdale, New York Orlando and Los Angeles, with Las Vegas being added from late October.

In addition to Gatwick, its UK subsidiary now operates from Edinburgh, Birmingham and Manchester with flights to more than 40 destinations worldwide. Norwegian is the third largest airline at London Gatwick, with 3.9 million yearly passengers, and with more than 700 pilots, cabin crew and staff working from its Gatwick base. 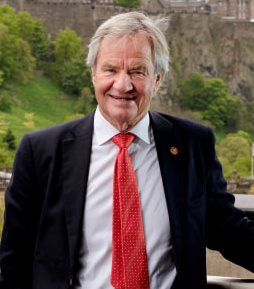 Norwegian’s CEO Bjorn Kjos has also indicated that it is considering entering the UK domestic market. Speaking recently in Edinburgh, he said that the airline was looking into how they could “create new routes from Edinburgh to feed into our fast-growing global network at London Gatwick.” Norwegian began flying from Edinburgh Airport in 2009 and has now flown over 1 million passengers, with services to six destinations in Scandinavia, Spain and the Mediterranean. It is also considering “the possibility of new transatlantic flights using the new Boeing 737 MAX”.

Separately, the US Federal Aviation Administration (FAA) has certified three of Norwegian’s Boeing 737-800s, as ETOPS-180 compliant. ETOPS is an acronym for Extended Operations and ETOPS-180 authorises a specified twin-engine aircraft, to fly routes that are within three hours of suitable airports.

The move was intended to allow the airline to begin using these aircraft on Cork-Boston transatlantic routes. Until now, Norwegian’s fleet of 737-800s have only been certified to ETOPS-120 standards. 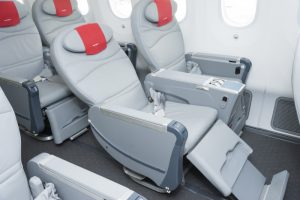 A Premium service is available on board Norwegian’s state-of-the-art Boeing 787 Dreamliner fleet, which operates on its transatlantic routes. Norwegian’s Premium cabin is in a class of its own, offering passengers an enhanced service and extra comfort at greater value, and also reduces the effects of jet lag, due to a lower cabin pressure. The Premium cabin has 32 seats on the 787-8 Dreamliner and 35 seats on the larger 787-9 Dreamliner. Passengers can now benefit from a more affordable enhanced travel experience, with fares newly reduced by up to 30%.

Premium passengers can check in two 20kg bags, benefit from fast track security, No1 lounge access and priority boarding. Premium passengers are also welcomed on board with complementary soft drinks, receive spacious leather reclining seats with 46 inch legroom and are served premium meals and unlimited beverages – all aboard the brand new 787 Dreamliner. The new Premium lead-in one way fares from London Gatwick range from £449 (€568.80) in summer and from £399 (€505.45) in winter (to Boston) to £579 (€733.50) in summer and £499 (€632.15) in winter (to San Francisco).

Norwegian is now one of Europe’s largest low cost carriers. It currently has a fleet of eight Boeing 787-8 Dreamliners, two 787-9 Dreamliners and 98 737-800s and flies from 17 bases. 40 of its 737-800s are registered to NAI and are on the Irish register, one is registered to Norwegian Air UK (G-NRWY ex EI-FHI and LN-NGM) and the other 57 are on the Norwegian register. The eight Boeing 787-8s are now also on the Norwegian register, while the two 787-9s are on the Irish register. 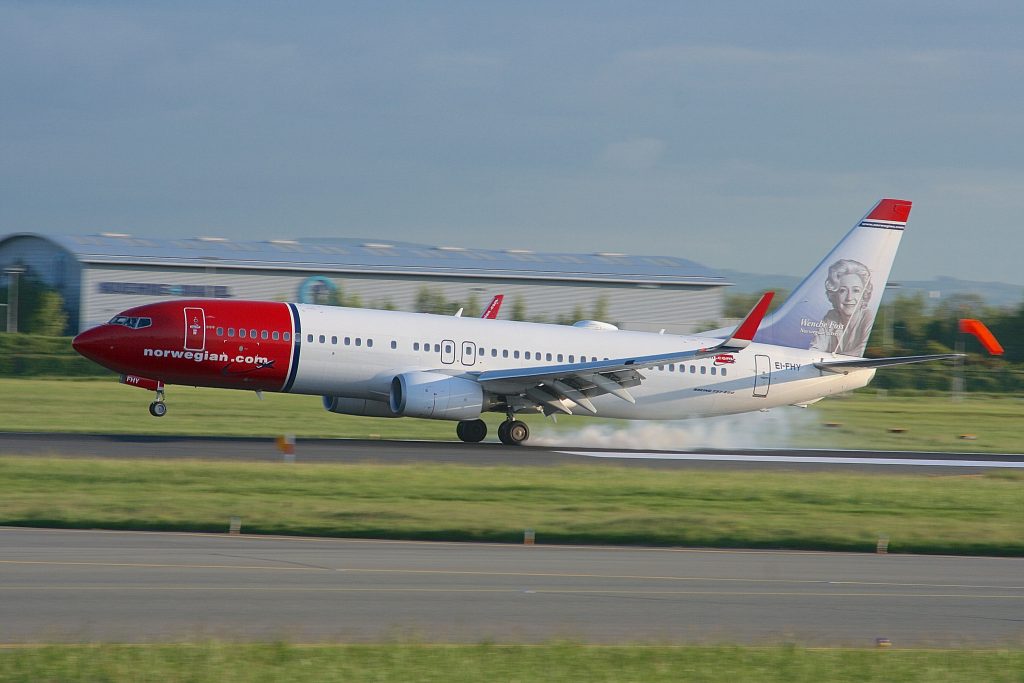 One of Norwegian Air International’s Boeing 737-800’s, EI-FHY which was previously registered LN-NGI

Norwegian is looking to add more Dreamliners to its long-haul fleet, even though it announced on 24th May, that it had signed an agreement with CIT Aerospace, to lease two Boeing 787-9 aircraft, to be delivered in spring 2018. With this new agreement, the company’s long-haul fleet will consist of 42 Dreamliners by 2020, including 10 on option. Norwegian also confirmed that it was exercising eight of its 100 Boeing 737 MAX8 purchase options. The Group already has 100 such aircraft on firm order and is the European launch customer.

Currently the airline operates an all Boeing 737-800 fleet having retired its last Boeing 737-3K9, LN-KKW. The ex Air Atlantis/TAP – Air Portugal aircraft flew for the last time from Lasham in the UK to the small town of Bodø in Northern Norway on 9th December last for preservation at the Norwegian Aviation Museum,

Due to ongoing difficulties with its Pratt & Whitney engines Airbus has delayed deliveries of the A320neo to Norwegian by two to three months. Norwegian has 100 of the new aircraft on order and was scheduled to receive the first four in 2016 and eight more in 2017. “The A320neo has some teething issues but we are working with Pratt & Whitney to solve the problems,” an Airbus spokeswoman said. “We are in constant discussion with our customers and we expect the problems to be solved by mid-year.”

The Helsinki-Dublin route is operated by Norwegian Air International at a twice weekly frequency. The D8-494/9 operates on Mondays and Fridays except for the period 19th June to 11th August, when it switches to Thursdays and Sundays. The service is operated in competition with Finnair, which operates Embraer’s on the route.

Finally Norwegian have released a new video outlining how its expansion plans will help deliver more competition, lower fares and more jobs to the U.S. and Europe. The video is available here.