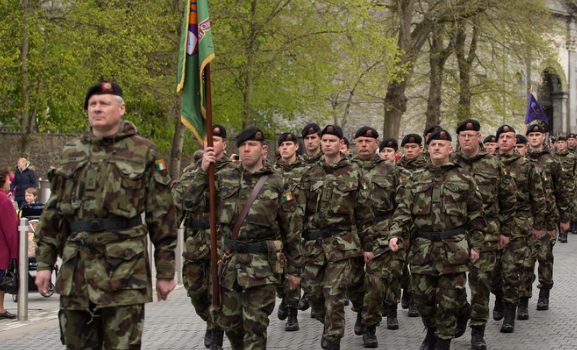 Earlier on the morning of 18th May, members of the 51st Infantry Group, United Nations Interim Force in Lebanon (UNIFIL), returned to Dublin Airport, following their six month deployment to Lebanon. Crowds had gathered from the early hours in Terminal 1 and waited patiently for the first sign of their loved ones, drawn primarily from the Army 2nd Brigade, with personnel mainly from the Leinster Region. 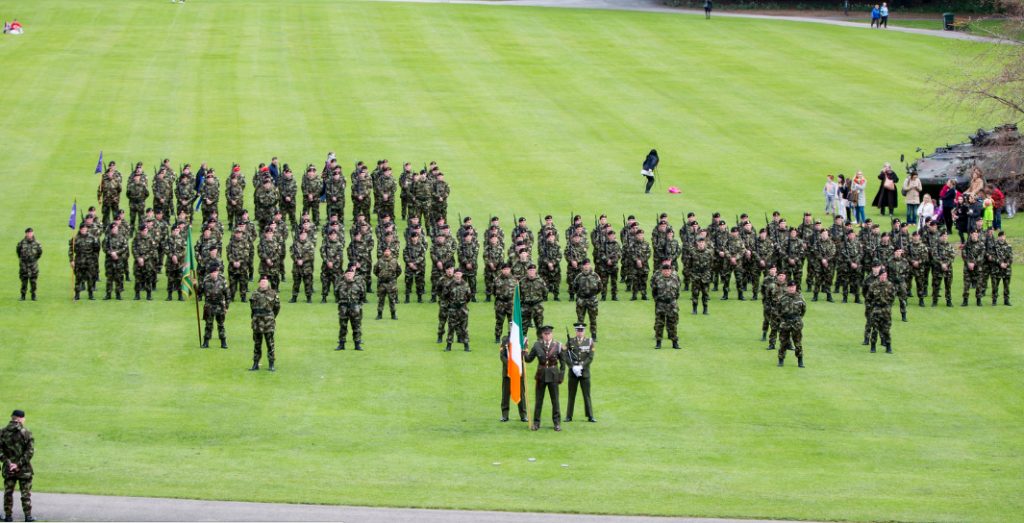 Minister of State for Defence Paul Keogh T.D. and Deputy Chief of Staff (Operation) Major General Kieran Brennan, were in attendance to welcome the members of the unit, commanded by Sligo native, Lieutenant Colonel Brendan McGuinness. The 190 troops, who were deployed as a Mechanised Infantry Company and as a contingent support group, landed in Dublin just before 07:00. They arrived on board Air Europa Airbus A330-202, EC-JQQ, which had been chartered for the rotation. It had departed Beirut at 03:47 (local) as the UX912. While in Lebanon, the 51st Infantry Group’s main tasks had involved extensive patrolling throughout their area of operations, in addition to monitoring the Blue Line between Israel and Lebanon.

Last November, Minister of State Kehoe reviewed these troops, prior to their departure on the mission, so it was fitting that he was at Dublin Airport to welcome them home. At the first glimpse of the blue berets and the Irish DPM Uniforms in the arrivals area of Terminal 1, erupted as families and friends waved Flags and welcome home signs to greet the returning troops. Many of those who had waited patiently, celebrated with the returning troops, amid smiles and tears of joy. 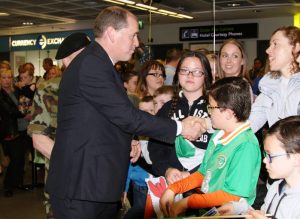 The Minister of State, who was reappointed to Defence portfolio on 6th May, expressed his appreciation and that of the Government, for the valuable work done by the 51st Infantry Group while serving with UNIFIL. The Minister commented “You, the personnel of the 51st Infantry Group have maintained the outstanding reputation of the Irish Defence Forces as committed, conscientious, professional and humane peacekeepers and I thank you for your dedicated service.”

The Minister went on to say “Rest assured I will endeavour to support the members of the Defence Forces to the fullest extent possible in my new role.”

The Minister concluded by saying “I would like to take this opportunity to pay tribute to all of your families and friends, many of whom are here today, for the important role they play in Ireland’s contribution to peacekeeping missions abroad.”

Indeed, none of this would have been possible without the love and support of family and friends and the soldiers will now enjoy some well-deserved leave and time with their loved ones.

Commanded by Lieutenant Colonel Stephen Ryan, the 53rd Infantry Group, who have been in training for the past two months in preparation for the mission, are drawn primarily from James Stephens Barracks in Kilkenny.

Appropriately enough, it fell to the Minister of State, accompanied by the Chief of Staff of the Defence Forces, Vice Admiral Mark Mellett DSM, to review the members of the 53rd Infantry Group at a ceremonial event, consisting of a parade, Ministerial Inspection and address in Kilkenny Castle, followed by a march past the Town Hall in Kilkenny City, on the 3rd May.

Addressing the troops directly on that occasion, Minister Kehoe said; “I commend each and every one of you on your decision to take on this mission. It is important to acknowledge that Ireland could not make such a substantial contribution to international peace support operations without the ongoing commitment of Defence Forces personnel to serve overseas in often difficult and dangerous circumstances.” 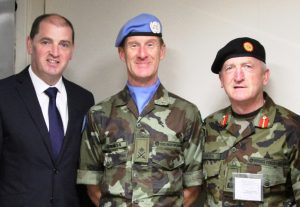 While UNIFIL has been successful in diffusing tensions and avoiding escalations, recent incidents – notably of 20th December 2015 and 4th January 2016 – remind us of the fragilities and dangers and also highlighted the challenges ahead.

Finally, on completion of the rotation, EC-JQQ, positioned from Dublin to Madrid as the UX912, departing Dublin at 09:18 and landing in Madrid at 12:25 (local).

Images from the Irish Defence Forces 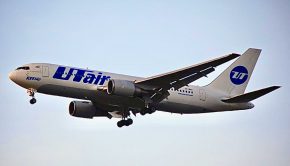