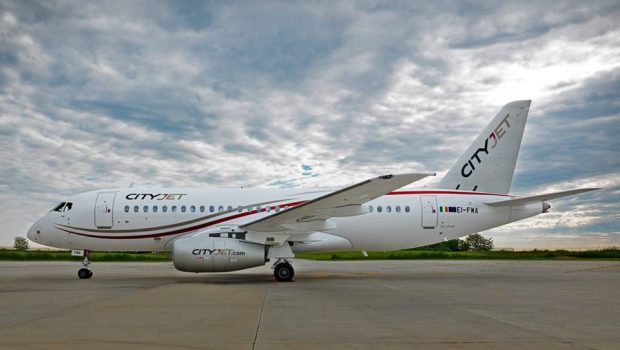 EI-FWA, the first of four SSJ100s to be delivered in 2016, was delivered to Cityjet today at the Superjet International facility in Venice. “The delivery of our first SSJ100 is an important milestone for CityJet as we begin our fleet renewal programme. This is a fantastic aircraft and we look forward to introducing our customers to its high levels of comfort and efficiency in the coming years,” said Pat Byrne, Executive Chairman of CityJet.

“We are very proud because CityJet is a reputable operator in the heart of Europe. This achievement highlights the development of the SSJ100 Program in Europe and in the international scenario. We know that the new customers are closely following us, focusing on the high advantages of the SSJ100 product and our robust and dependable technical support centralized in Europe,” said Nazario Cauceglia, Chief Executive Officer of SuperJet International.

The SSJ 100 seats 98 passengers and is the first aircraft in its class to offer five abreast seating in a generous 32” seat pitch. Combined with a wider seat and a cabin height of over 2m, the SSJ100 offers more cabin and overhead bin space than competitors. The SSJ100 utilises the latest in design and flight technology from key manufacturers such as PowerJet for the engines (JV between Snecma – Safran and NPO Saturn) and Thales (avionics), Goodrich (wheels) and Honeywell (auxiliary power unit) from the USA. The interior benefits from the Italian design house of Pininfarina. The aircraft achieved European Aviation Safety Agency (EASA) certification in February 2012.

CityJet has agreed to take four aircraft in 2016 with the delivery of an additional 11 throughout 2017. The airline has also taken options on an additional ten aircraft.