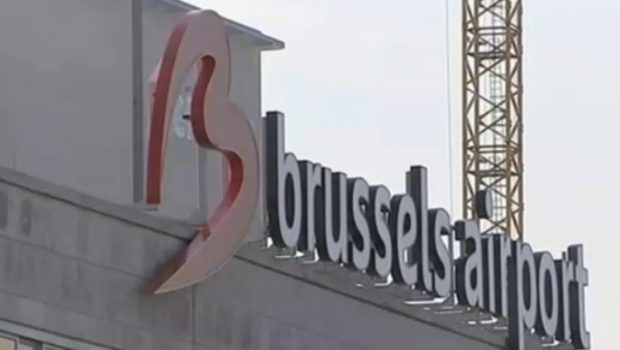 On the afternoon of Sunday 1st May, Brussels Airport took another significant step in the process of restoring the airport to full operational capacity, by officially reopening the departures hall, during a short reopening ceremony. The airport believes that the reopening of the departures hall is an important symbol of the recovery of the country, 40 days after the 22nd March attacks, that hit the airport in its heart. The opening ceremony was attended by employees of the airport community and the emergency services, as well as representatives of what were described as, ‘the highest authorities of the country’.

Speaking at the reopening ceremony, Arnaud Feist, CEO of Brussels Airport Company, said; “This is a very important day for Brussels Airport. We are again seeing the familiar image of passengers in our departures hall, a big step towards the return to normal activities at the airport which will give a boost to the economy of the entire nation. Brussels Airport not only is the second most important centre of economic growth with 20.000 jobs, we also connect Belgium with the rest of the world and are often regarded worldwide as a symbol of our country. That we are returning to an almost normal situation in so little time, is important for the confidence of our business, investors and foreign tourists.”

Marc Descheemaecker, chairman of the board of directors of Brussels Airport Company, added: “After the expressions of solidarity in the first days, we now receive messages of admiration and support from other airports and airlines for the quick restart of our airport. Let’s hope that due to this quick restart the negative impact of the attacks on our country will be limited in time, as was the case with similar events in other countries.”

During the opening ceremony, the first passengers entered the reopened departures hall. According to the airport, about 400 passengers in total, bound for Malaga, Lisbon and Palma de Mallorca, checked in at the reopened departures hall. The Airport said it wished to expressly thank, all parties involved in the restart of the airport, for their contribution: all employees of Brussels Airport Company and of the entire airport community, the federal police, the ministries of the Interior and of Transport, the Directorate-general of Civil Aviation and Belgium Slot Coordination.

From Monday 2nd May, a new flight schedule took effect at the Airport. The Airport says that the number of passengers per flight is rising faster than expected, leading to a new flight schedule being drawn up for all passengers, to allow them to travel in complete safety and comfort. With effect from that date, 111 check-in desks were open in the departures hall, in addition to the 36 desks in the temporary constructions. This means that 147 check-in desks and several self-check-in kiosks in the departures hall and temporary construction are now available for passengers. 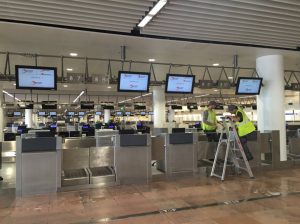 The temporary structures can accommodate up to 18,000 departing passengers per day according to the airport. This is on the assumption however, that the passengers are evenly spread over the day. Taking into account the applicable safety measures, the growing numbers of passengers per flight and the comfort that Brussels Airport wishes to offer passengers, the slot coordinator, Belgium Slot Coordination, has limited flights to 22 flights per hour in the alternative flight schedule. This is fewer flights than during peak hours since the reopening at the beginning of April.

As part of the alternative flight schedule, all passengers travelling on board a Brussels Airlines operated flight, (including Belfast); check-in is in the main departure hall. In the case of a partner airline’s flight – a codeshare flight with Brussels Airlines (flight numbers SN4000-SN9999), passengers need to check on the Brussels Airport site, as to whether to check-in in the Departure hall, or the temporary Check-In facility. In addition, the airlines are informing their passengers of where to check in, while Brussels Airport staff are present to help passengers, who are unsure about where to check in. Over 30 airlines remain in the temporary Check-In facility, including both Aer Lingus and Ryanair.

The Airport has advised that on top of the usual safety procedures, extra security measures have been put in place, such as a pre-check-in zone. As a consequence, the check-in process takes longer than usual. They are asking passengers to arrive three hours in advance of their departure time. Other travel advice and practical tips for passengers remain unchanged:- 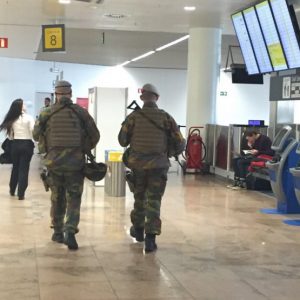 These extra security measures, the disadvantages of which we outlined in our previous piece posted on 6th April (see here), have also drawn criticism for other figures, such as Tony Tyler, Director General and CEO of the International Air Transport Association (IATA). Speaking recently at the European Aviation Club, in Brussels, he said that pre-screening at Brussels Airport has “created large and dense crowds that could be targeted”. He added that extending the security perimeter, “is not the solution” “In the long-term we all know that an intelligence-powered, risk-based approach will keep us secure. The goal is to stop terrorists before they get to the airport” he added. He was pleased that others had not followed suit and that “we didn’t see a knee-jerk reaction on security regulations across Europe following the terrorist attack” in Brussels. In addition to the increased dangers, there is the huge inconvenience to people who want to travel. As Mr. Tyler noted “I experienced that myself last Friday. And I will experience it again this afternoon – likely in rain, but possibly in snow as well”.

So how did Brussels Airport’s new flight schedule work out?

Well to be honest it was a bit of a disaster, with chaotic overcrowding being experienced on Monday, following the reopening of its departure hall, as stringent security made thousands of passengers wait hours in long queues. Worse due to the security screening, many of them had to queue outside the building, some missing flights as a result, local media reported. Among the stranded passengers was former Belgian Prime Minister Yves Leterme, who missed his flight to Budapest, after waiting for two hours and 40 minutes. 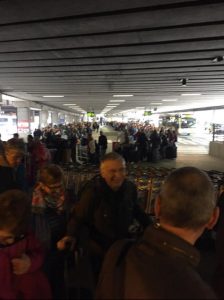 “In the coming weeks I’ll think twice about choosing Brussels Airport,” he told Belgian daily Het Laatste Nieuws. “I think Paris is the better option” he added. Other passengers bitterly complained (some on TV others on social media), that police checks at the entrance to the building were not only causing delays of several hours, but have created a new security risk by making a huge crowd of people congregate outside. Numerous photographs uploaded on social media showed the chaotic scenes, with one poster commenting “Airport has never been so well protected, passengers on the other hand? For three hours in a long queue outside is safe?”

Others appeared to be more tolerant, saying that these measures were temporary and are made for security reasons. One poster noted “Hopefully they’ll fix this absurd situation soon enough. This isn’t a long term solution!”

Brussels Airport spokesperson Nathalie van Impe admitting the difficulties said; “The first day… is always difficult,”. “We will evaluate the operations and optimise them.”

Her boss, president of the board of Brussels Airport Marc Descheemaecker was less diplomatic, blaming the police unions, which took the decision to screen all passengers and their luggage at the entrance. In candid comments posted on Facebook, he wrote:

“Damn! We worked day and night for 40 days to reopen the airport and some police union representatives hold on to that bizarre system of pre-check-ins”, He added; “Abandon it… abandon it… We are shooting ourselves in the foot and making fools of ourselves abroad.”

Police union VSOA, however, blamed a lack of staff among private security firms, which carry out the initial checks for the problems. “We are open to suggestions about how to improve the checks but one thing is clear, security at the airport has to be better than before 22nd March” a spokesman for police union VSOA said. In an attempt to limit the damage, Belgium’s interior ministry, which is ultimately responsible for security, said it would hold talks to address the situation and come up with an improved procedure. 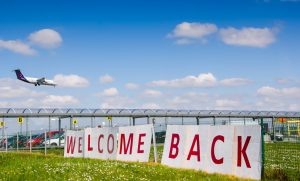 It was not all bad news for the airport, in a symbolic move local airport spotters organised a well-appreciated ‘welcome-back’ sign for all those flying back to Brussels Airport, as can be seen in this photo from Wim Peeters Aviation photography via the Brussels Airport Facebook page.

We will also leave the final word to Mr. Tyler, who said that for Brussels Airport, the focus surely has to be a return to normality as soon as possible. “By normality I mean ensuring that the airport doesn’t have artificial restrictions on its capacity just to reduce the queues. People want and need to travel. Normality means meeting that demand,” he added. Who could fail to agree with those sentiments?

Outside of Brussels, it is reassuring to see Europe and other governments are also continuing to evolve the risk-based concept for what happens at the airport in consultation with industry, through known traveller programmes, one-stop security agreements and other initiatives. These focus resources where the risk is greatest. However, security will in the long run be best served by one European standard being followed by all its member states, but it must be practical and proportionate.