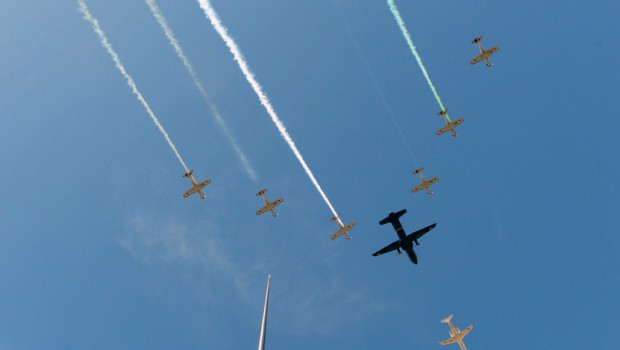 Prior to the start of the 1916 Centenary year, the Government tasked the Irish Defence Forces (Óglaigh na hÉireann), with assisting all seven strands of the Ireland 2016 Programme of Events, including State Ceremonial, Historical Reflection and Community Participation. The Defence Forces had, and continue to have, a key role in particular in conducting appropriate state ceremonial events to commemorate the 100 year Anniversary of the Easter Rising. 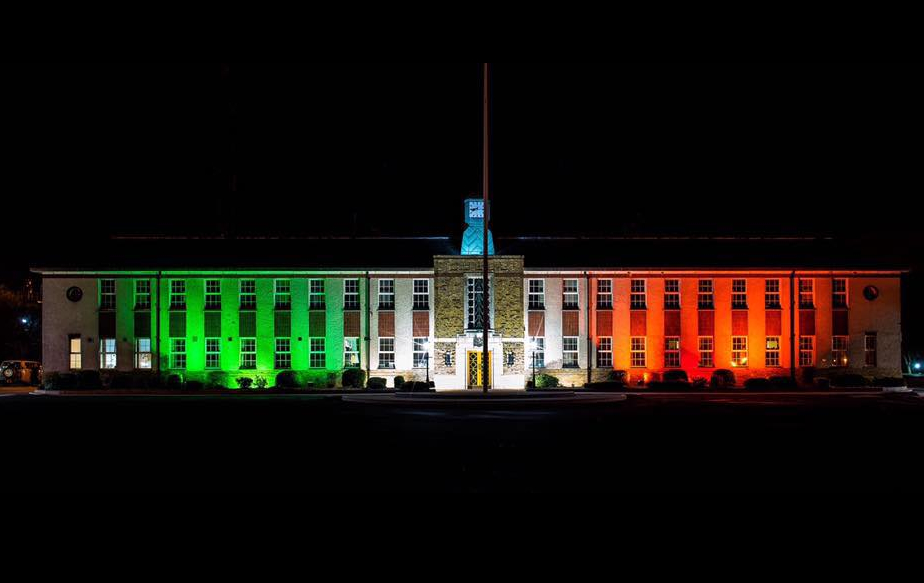 The Defence Forces are taking part in 56 State Ceremonial events throughout the Centenary year. In addition, they are committed to supporting 31 local authorities with 33 flag raising ceremonies, with approximately 5,000 Defence Forces personnel involved. For further details download the Defence Forces Programme of Events in PDF format here.

The centrepiece of the Defence Forces involvement was on the Easter weekend and the state ceremonial highlight was the military parade on Easter Sunday 27th March, through the streets of Dublin City Centre. The Air Corps as the air component of the Defence Forces played a major role throughout the year to date, and we will look at this participation in more detail below. 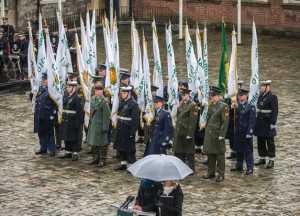 The 2016 Programme began on 1st January with a flag raising ceremony in the Upper Yard of Dublin Castle. This was predominately an army event, although personnel from the Air Corps and Naval Service were also present. It consisted of two main elements; The reading, by the Defence Forces, of the Roll of Honour of the volunteers who lost their lives during the 1916 Rising and the raising of three flags which were flown on O’Connell Street during Easter Week 1916. These were the Irish Citizen Army Flag, which flew from the Imperial Hotel (now Cleary’s department store on O’Connell Street), the Irish Republican flag and the National flag which were flown from the GPO. The ceremony concluded with the playing of the Reveille and the National Anthem.

Following this event, the Defence Forces were tasked to raise the National Flag every day during 2016 on O’Connell Street, outside the GPO. The first weekend of this ceremony was provided by the Air Corps. The two members involved were Lieutenant Neil Dunne, assisted by Flt Sergeant Oliver McKeown. Flt Sergeant McKeown a senior instructor in the Air Corps’ Technical Training School has over 29 years in the Defence Forces. The flag raising ceremony was especially significant for Lt Neil Dunne, a helicopter pilot in 3 Operations Wing. Neil’s family has a long history of military service that began with his Great Grandfather, Anthony Swan, who served as a volunteer in the GPO during the Easter Rising. 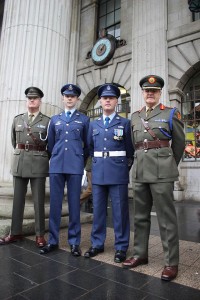 The Air Corps were again tasked with the GPO flag raising ceremony at the beginning of February when Lieutenant Frankie Mohan and FQMS Tracey Walsh performed the ceremony. Lieutenant Mohan is a recently qualified helicopter pilot serving in 3 Operations Wing and Flight Quartermaster Sergeant Walsh has served almost 22 years in the Defence Forces, completing two overseas tours in Lebanon and Bosnia.

In addition, to this ceremony the Defence Forces are being tasked to carry out flag raising ceremonies in each county as an integral part of the local authorities’ individual 2016 Commemorative Programmes across the country.

A key part of the Ireland 2016 commemorative programme has been the Flags for Schools Initiative, which saw members of the Defence Forces, in uniform, visiting schoolchildren, teachers and parents, in over 3,200 schools, across the Republic, since last September. As part of the programme, each of the 3,200 primary schools were visited by a team, led by an Officer or senior NCO, who formally presented the National Flag to the School, in a special ceremony. The personnel went on to explain to the schoolchildren about how the National Flag should be cared for, and the protocol that surrounds this vibrant symbol of our nation. Gaelscoileanna and schools in Gaeltacht areas were visited by Irish speaking personnel. As part of the event, which lasted around 30 minutes, the Officer or NCO read out the 1916 Proclamation and presented a high-quality copy of it, together with a pack for each school. The pack contained a booklet on how to care for the Flag; a poster of Amhrán na bhFiann and our National Anthem. 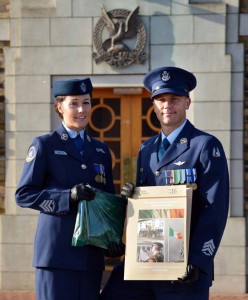 In a separate event, the Defence Forces proudly assisted with the presentation of flags and proclamation packs to approximately 6,000 secondary school representatives on 7th March, in collaboration with the Ireland 2016 programme and the Thomas Francis Meagher Foundation, at an event in Croke Park. In line with the sporting heritage of the venue, the packs were distributed by prominent sports people that are members of the Defence Forces; 9 time camogie All Star Corporal Gemma O’Connor (Cork), Kilkenny hurling stars Major General Kieran Brennan, Corporal Paul Murphy, Private Colin Fennelly and national handball champion Ordinary Mechanic Robbie McCarthy (Westmeath) of the Irish Naval Service, currently ranked number 2 in the world. Other civic and sports personalities present at the event, with historical links to the War of Independence, included Ryan Tubridy, Packie Bonner and John Treacy.

The initiative culminated in Proclamation Day on 15th March 2016, where every school raised the National Flag, in special ceremonies. Following the example of their individual school events, the 1916 Proclamation was also read. 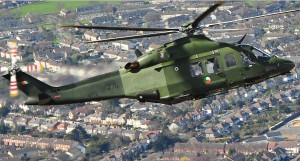 AW139 ‘275’ over Dublin during the Easter Weekend. An Air Corps AW139 also visited Arranmore and Tory Islands as part of the Flags for Schools Initiative

The Air Corps also visited a number of schools as part of this programme, using a number of teams, including the ‘two Sergeants Walsh’ – a husband and wife team. A highlight for children on Tory and Arranmore islands was the visit by a team led by Lt Colonel Ronan Verling, Baldonnel Base Commander and Officer Commanding No.5 Support Wing. Ensuring that the island children were not missing out, they arrived by helicopter, as previous attempts had been called off due to inclement weather. The long wait was well worth it, as the children from Scoil Aphóirt and Scoil Árainn Mhór on Arranmore and Scoil Náisiúnta on Tory, were delighted by their special visitors. The AW139 crew were also given permission to use Northern Ireland’s airspace, which allowed them to fly the ‘long route’ around Belfast to Malin Head, before reaching the islands. Air Corps personnel were also involved in the final event at Tallaght Hospital on 11th of March (See below) attended by An Taoiseach, Edna Kenny and the Chief Of Staff, Vice Admiral Mark Mellett DSM. Sergeant Leona Walsh from No 1 Operations Wing represented the Air Corps and she was joined by Lieutenant Deirdre Fahy and Corporal Gary McKenzie from 7th Infantry Battalion, and Lieutenant Commander Stephen Murphy, the Officer Commanding the Dublin unit of the Naval Service Reserve.

As previously stated, the centrepiece of the Defence Forces in the Centenary year was their involvement over the Easter weekend and in particular the military ceremonial parade on Easter Sunday, through the streets of Dublin City Centre. This involved 3,722 personnel from the Defence Forces and Emergency Services, 78 vehicles, five equitation School horses and 13 aircraft as well as marching bands and colourful flag parties in full ceremonial order.

The marching elements consisted of personnel drawn from the Army, Air Corps, Naval Service, Reserve Defence Forces, Defence Forces Veterans and personnel from selected Emergency Services. It was complemented by a range of selected Defence Forces vehicles and towed equipment designed to showcase their capability.

It was one of the biggest ceremonial events the Defence Forces have ever been involved in, and started on Stephens Green at 10:00 and routed via Stephens Green, Cuffe Street, Kevin Street, Patrick’s Street, past Dublin Castle and across O’Connell Bridge at about 12:30, following the official ceremonies there. It then passed the GPO, up O’Connell Street and ended at Bolton St at around 2:30. 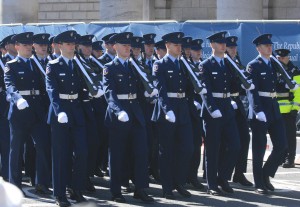 Air Corps marching in the parade

Again the Air Corps took pride of place in the parade. Lieutenant Gearóid Ó Briain, a Great Grandson of Cathal Brugha, (second-in-command of the garrison at the South Dublin Union, led by Éamonn Ceannt), led the parade carrying the national colours. He was accompanied by Sergeant Kane and Sergeant Dwyer, who preceded the parade commander, Brigadier General Michael Beary, General Officer Commanding, 2nd Brigade. These personnel together with other Flag parties, the Cadets, Veterans and the Equitation School Horses formed the first ‘serial’ of the parade. 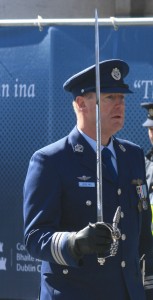 The parade left Westmoreland Street after the GPO ceremony concluded with the National anthem. As this point, a fly past by six Pilatus PC-9M aircraft, callsign ‘Eagle’ section, flown by the instructors of the Air Corps’ Flying Training School, roared overhead. They flew in a spectacular close Wedge Formation at 700 feet (around 213 metres) above O’Connell Street at a speed of around 450 kilometres (243 knots) per hour. The formation used their brand new smoke generation system, providing the wonderful sight of the tri-colour flying above O’Connell Street.

The next two serials consisted of troops from the Army Brigades and Armoured Vehicles. This was followed by a fleet fly past consisting of two sections, ‘Raven’ (one EC135 and four AW139s) and ‘Condor’ (Learjet ‘258’ & Casa ‘253’ plus the six PC-9Ms). 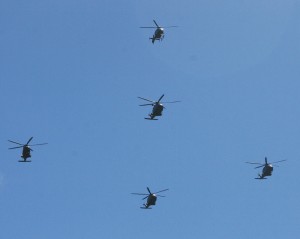 The five helicopters of ‘Raven’ section were from 3 Operations Wing, the Air Corps’ helicopter unit. The lead aircraft EC135 was flown by Captain O’Beirne from Castleknock and Captain Oisin McGrath from Clarecastle, Co. Clare. Both pilots are helicopter instructors in 302 Squadron and are tasked with training new helicopter pilots in the multiple helicopter roles carried out by the Air Corps. 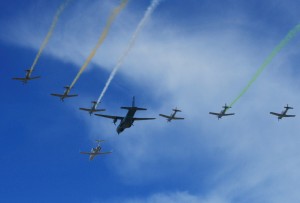 ‘Condor’ was led by the Learjet 45, flown by Commandant Arthur Hunter-Nolan, from Kildare. His co-pilot was Captain Niall Goff from Rosslare, Co. Wexford. The Casa Maritime Patrol aircraft was flown by Commandant Barry Sills, from Wexford and Commandant Patrick Ridge from Dublin. The PC-9s joined the formation to create ‘Condor’ and completed the Air Corps flypast of 13 aircraft.

The sixth serial consisted of personnel from the Air Corps and Naval Service. The Air Corps was represented by 120 marching troops led by Lt Colonel Ronan Verling. The final elements of the parade consisted of representatives of the Emergency Services and a selection of their vehicles and Massed Bands. 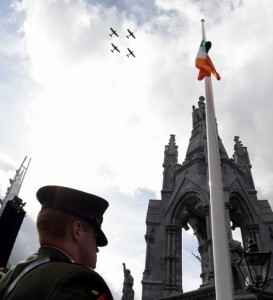 A military vehicle and equipment display also took place on Smithfield Square in Dublin from 09:00 to 18:00, while the Naval Ships LE Ciara and LE Samuel Beckett berthed in the City, were open to the Public. 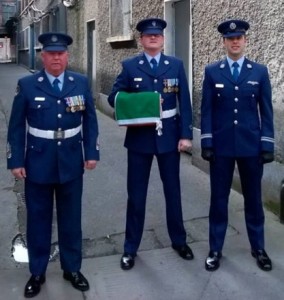