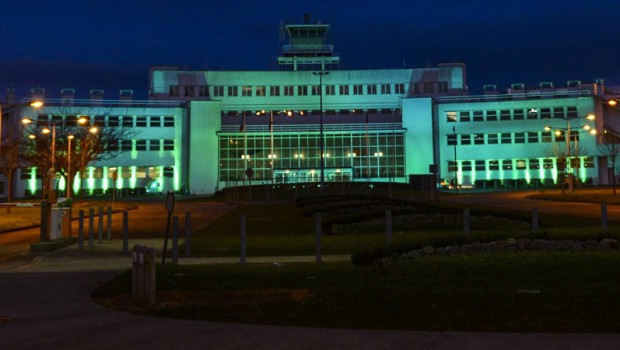 Dublin passenger growth at Dublin remained strong in January and February, following on from the record 25 million passengers, who travelled through the airport, during 2015. Both months recorded a 17% increase over the same month in 2015, with over 1.7 million passengers being recorded in each of the two months. Passenger growth is expected to continue as the year progresses, as 11 new scheduled and two new charter services have already been announced.

Passenger volumes to and from continental Europe rose by 16% in February, with almost 817,000 passengers travelling to European destinations. This was less in percentage terms than in January, when continental European traffic grew by 18%, and at 815,000 was slightly lower in passenger numbers as well.

UK traffic recorded an increase of 19%, with over 752,000 passengers travelling in February, while in January traffic grew by 16%, to almost 686,000 passengers.

Passenger volumes to and from North America also performed well growing by 20% in February, to just over 98,000 passengers, this compared to the 26% growth in January, when 129,000 passengers travelled.

The March traffic figures are also expected to be good, as the airport expected to welcome more than 370,000 passengers arriving and departing through the airport, over the St. Patrick’s Day festival period. This also coincides with a big sporting week at the airport and 20 flights have been added to the schedule for the thousands of punters travelling to and from Cheltenham. Large numbers of Scottish fans were also expected for the last Six Nations rugby match on Saturday 19th March. 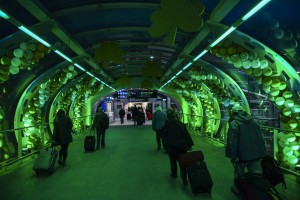 Once again Dublin Airport is participating in the Global Greening for the St. Patrick’s Day festival, with the ‘greening’ of buildings, including Terminals 1 and 2 and the original 1940s terminal building, adding to the festive atmosphere around the airport during the week.

“This is our third year to green the airport and we’re lighting up more locations around the airport campus bringing the St. Patrick’s Day festival to life at the airport” said daa spokesperson Siobhán O’Donnell. Musical entertainment from local schools and festive decorations in the terminals is also part of the celebrations.

As previously reported, Dublin Airport has invested €15 million in modernising the Departures Floor and Security Screening area in Terminal 1. A significant part of this investment relates to the delivery of 15 new automatic tray return system (ATRS) machines in the passenger security screening area.

The new ATRS machines are six metres longer than the previous machines. This additional length includes a parallel loading area at the start of the lane, giving extra preparation space, so that up to four people can load trays comfortably at the same time. Earlier trials of the new system have shown faster passenger processing times while complementing security compliance procedures.

“Almost 400 million passengers have used Terminal 1 since it first opened for airport operations 44 years ago,” said Dublin Airport Managing Director, Vincent Harrison. “The building has endured much wear and tear over that time and we are renovating it on a phased basis starting with Departures and the Security Screening area,” he added.

Five of the new machines have already been installed; the remainder will be in place by the end of May.

“We understand the security screening process can be a stressful element of the departing journey and we are constantly looking at ways to improve that area in particular,” according to Mr Harrison. “We are confident the new ATRS machines, which are much quieter and more efficient, will improve the overall ambience of the area giving our customers a better experience,” he noted.

More than 200 of the 350 new jobs recently announced by daa are being recruited to security screening and compliance areas.

Other improvements to the Departures Floor have seen the removal of airline ticket desks from window areas, allowing for more natural light to flow over the concourse. A new facade on the walls has brought a fresh look to the terminal and passengers will see other improvements in the coming months. 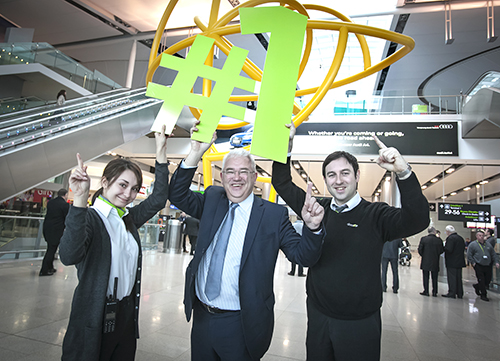 Notwithstanding the fact that Dublin Airport had its busiest ever year in 2015, with an additional 3.3 million passengers, it has nevertheless been rated number one ahead of all other European airports of a similar size, in the latest airports survey quality results, announced on 29th February by Airports Council International (ACI).

“This is a very significant achievement for Dublin Airport,” said Vincent Harrison noting that “a few short years ago Dublin Airport was rock bottom in its peer group of airports surveyed in ACI’s service quality rankings”. “Since then we were determined to improve our customers’ experience of the airport and we have done that every year to get to this top spot,” he added. One could also say the same for Sheremetyevo, which although it received the top award by ACI in 2012 and again in 2013 and 2014, still prompts a negative perception from passengers.

The 2015 results represent the world’s best in class airports where improving the customer experience is concerned. Throughout the year passengers are asked in depth questions about the quality of their travel experience through the airport they are travelling through at that time and this information is benched marked against ACI member airports of a similar size. 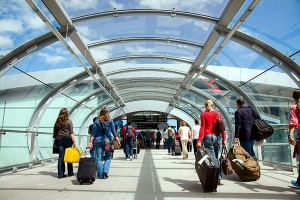 “From duty free and restaurants to ambience, cleanliness, courtesy of staff, amenities, efficiently and more, passengers are expecting big things from the airport they travel through and the Airport Service Quality survey is a way for airport customers’ to measure the extent to which they deliver on these expectations,” she added.

Dublin Airport seeks the views of up to 30,000 passengers through detailed surveys. The results of these surveys are forensically analysed and many improvements are made to facilities and services based on their feedback.

“The key areas to drive passenger satisfaction at Dublin Airport are courtesy and helpfulness of staff, security, check-in, cleanliness and the Departure Gates,” according to Mr Harrison.

“We are passionate about improving our customers’ experience further and it is a key priority of our management and staff at Dublin Airport to continue to do that,” he said.

Airports Council International (ACI) is the only worldwide association of airports. ACI has 592 member airport authorities which operate in 1,853 airports in 173 countries. 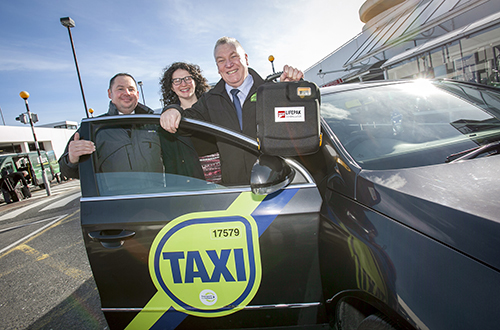 Thanks to a partnership with TTNH (Tiomanai Tacsai na hEireann) and Dublin Airport, 15 airport taxi drivers have become potential life savers, following training by Dublin Airport’s Fire Service over the course of two days, to the community level first responder stage. This led to the airport presenting the 15 drivers with a certificate in the use of automated external defibrillation.

“This is the first time we have facilitated defibrillator training with our airport based taxi drivers,” according to daa Landside Manager, Anthony McGarry. “I am delighted we now have 15 airport taxi drivers skilled in the use of defibrillation and we plan to build upon that number in the months ahead,” he said.

Philip Kavanagh from the TTNH, the Taxi Union, commended the daa for its commitment to the scheme. “Defibrillator training is a fantastic lifesaving skill for our taxi drivers to have and this initiative is a great example of what can be achieved through working together”.

Dublin was designated a Heartsafe Airport in 2007 by the Irish Heart Foundation in recognition of its success rate in saving victims of cardiac arrest at the airport, with the use of public access defibrillation. “Dublin Airport has over 70 Airport Police Officers and 90 firefighters currently trained to use any one of the 45 defibrillators located throughout the airport campus.”

Dublin Airport is hosting a Smart Airport Hackathon at DCU’s Alpha Innovation Campus from 15th-17th April next, where entrepreneurs and innovators are invited to come together with those involved in software and hardware development, as well as user experience designers and end customers, to find solutions for specific businesses or industry challenges. That’s what a ‘Hackathon’ is, and in sponsoring the three-day event, Dublin Airport is looking for bright, entrepreneurial minds, be they engineers, designers, entrepreneurs or airport customers to open their minds and ‘design’ hardware, software and service solutions and improvements to everyday travel problems from the time a passenger books a flight to boarding the aircraft and in doing so radically enhance the customer experience at the airport. Dublin Airport has partnered with RTÉ and Frontline Ventures, who have come on board as judges and mentors for the duration of the Hackathon.

“Continuously improving the passenger experience at Dublin Airport is a key priority for us,” said Vincent Harrison. “We have embraced technology through our airport app and the use of Flightradar24. Our DUB HUB web link provides virtual assistance for transferring passengers, we are using Bluetooth technology at the airport to provide live queue times for customers and our Mobile Ops View is a solution which significantly enhances safety on the airfield providing real time information of all aircraft and ground vehicle movements”.

Between 150 to 200 hackers are expected to take part in Dublin Airport’s ‘three day Hackathon’. The event will start at 3pm on Friday, 15th April and end with the winners declared on Sunday at 7pm. The solution that most impresses the five judges will win a cash prize of €7,000, the runner up will receive €3,000.

Aidan McCullen, Head of Innovation Partnerships & Funding, RTÉ, said “RTÉ like Dublin Airport is focused on innovating for the future and harnessing the best in new technologies to continuously evolve our offering. RTÉ and Dublin Airport is opening up innovation to the public and the start-up community to co-create our future. We are supporting Dublin Airport’s Hackathon event as a media partner in addition to being mentors to those entering. A team from RTÉ’s digital division is also participating in the Hackathon weekend.”

Frontline Partners Founding Partner Shay Garvey said “We are delighted to be part of such an exciting and innovative initiative. As long-time tech operators and investors, we know that Dublin Airport has long been one of the global hubs for travel technology. I’m looking forward to meeting the Hackathon teams and mentoring them from a potential venture investor perspective.”

DCU President Brian MacCraith said “We are delighted to be hosting this innovative Hackathon for Dublin Airport. DCU Alpha is recognised as the home of Hackathons in Dublin and this event in particular allows DCU to build on its existing relationship with Dublin Airport through the recently established Dublin Aviation Institute”.