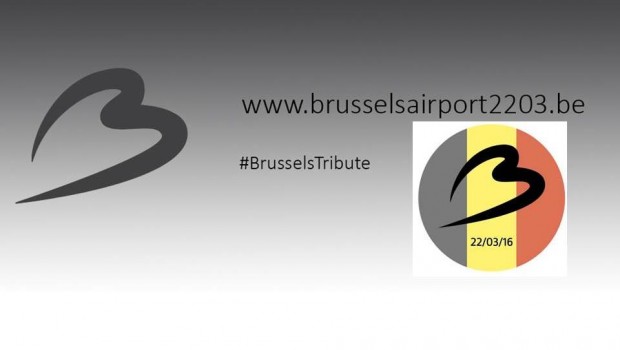 Following the terrible events that took place on 22nd March at Brussels-National Airport, Zaventem, the airport remains closed. Suggestions of a possible restart of operations in the short term proved unrealistic, due to the devastated infrastructure. Nevertheless, an extensive analysis of the terminal infrastructure and of the various possible scenarios for a partial recommencement of its activities has been undertaken, but at this stage it not yet possible to say when this partial restart will take place, as it has not yet been decided. The Airport has indicated that this will depend on “the various processes that have to be restarted”. 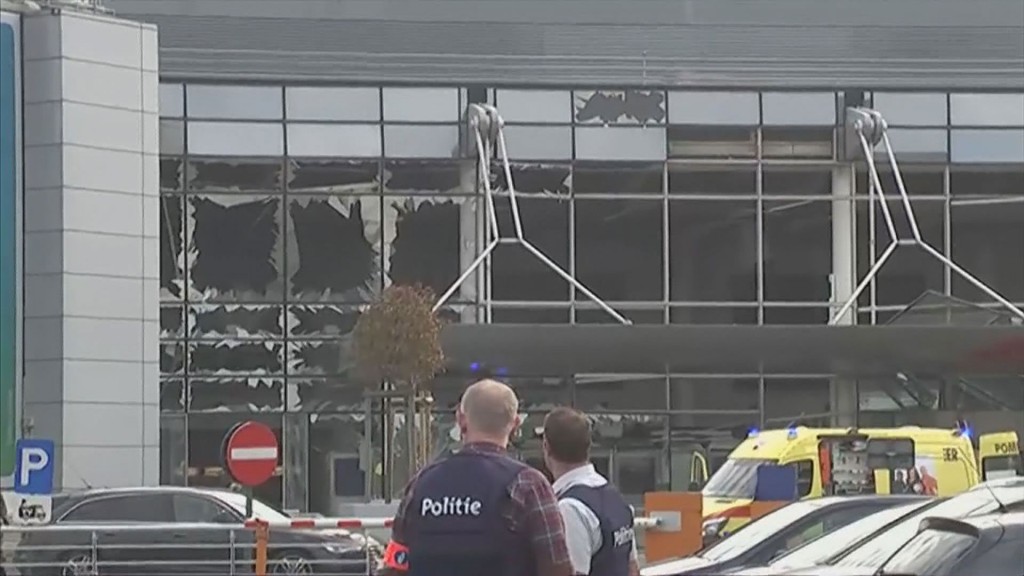 Some of the damage to Brussels Zaventem Airport

However, Brussels Airport began erecting what it described as, “temporary constructions,” on Thursday 24th March. These included the additional security measures that are being implemented at all Belgian airports on the orders of the government. When reopened, the departure flow at the airport will run via temporary additions to the ground-floor zone of the ‘Connector’ building, which links the passenger terminal to Pier A above-ground. There, an area will be installed with temporary check-in desks where passengers can report for their flight and also hand in their luggage. From there the route will make use of the service stairway to the familiar screening platform of the Connector area, which emerged undamaged from the attacks. The passenger and hand-luggage checks will take place in this area, and from here the passengers will follow the normal route. For arriving passengers, the airport is looking at a solution to take them by bus via a hangar. Normally arriving passengers can make a smooth passage via the Connector building to the baggage reclaim hall and the exit. The alterations are intended to meet three criteria:

The construction and fire safety inspection of the temporary constructions took place on Tuesday 29th March, with 800 airport staff being deployed to test the temporary passenger flow arrangements and the infrastructure, for the check-in procedure. This test was developed in consultation with the various airport partners, the Federal Police, Defence and the Belgian Civil Aviation Authority (BCAA). Following this test, the government authorities concerned must give their approval to the security system, as well as to the partial recommencement of the airport activities. While this could be as early as Wednesday or Thursday, when the airport finally reopens capacity will be reduced with the airport hoping to process 800 passengers an hour initially. This compares with the normal capacity of 5,000 an hour. Officials say that it will take months before the airport can return to full capacity. 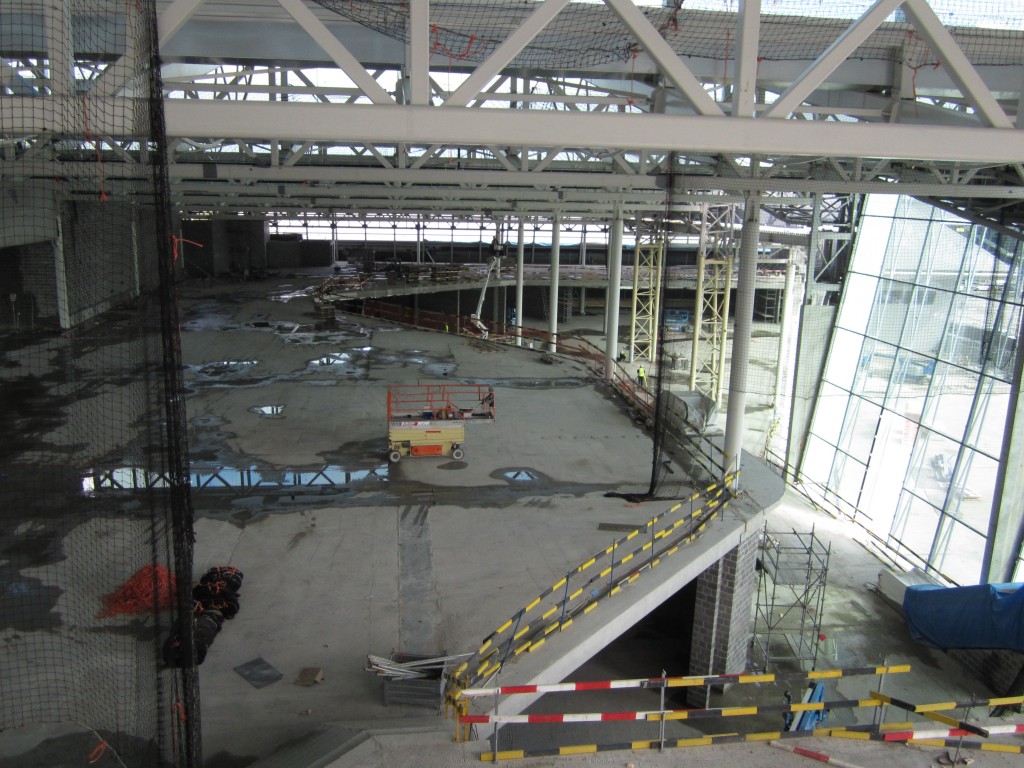 Arnaud Feist, CEO Brussels Airport Company, thanks all his airport colleagues in an open letter

In an open letter to all his airport “colleagues”, Arnaud Feist, CEO of the Brussels Airport Company, expressed his thanks for their “endeavour, courage and resilience”. “Words fail me to express my gratitude to all of you” he said, adding that “during the last few days he saw the famous airport spirit” and “have again seen what that really means”.

He went on; “22nd March, 8am, two bombs exploded. There were hundreds of employees and thousands of passengers in the departures hall. Immediately after the blasts, our fire crew entered the hall and gave first aid.

Shortly after that, tens of people from our operational services and administration did the same thing. A bit later the Red Cross and other emergency services also joined in.

Employees of the airport, first-aiders and passengers also, nobody hesitated to help other passengers and our colleagues, who had just become the victim of these callous attacks on our airport. Apart from first-aider, you were also the victims’ moral support and protection.

Holding the hands of dying people, talking to severely injured people to keep them conscious, comforting children who had walked astray or who were too small to get themselves safe. You were super-human and brave. Please, take time to process what you’ve been through; we have a team of professionals at the ready to look after you. That includes me, all of the management here at Brussels Airport Company and all other colleagues of companies working at the airport.

During the Easter weekend hundreds of volunteers of the companies working here at Brussels Airport were helping to return cars and luggage to passengers, to start cleaning the airport, to find a solution for people who want to enjoy a well-deserved holiday, to look for alternative solutions so we can start receiving passengers again. 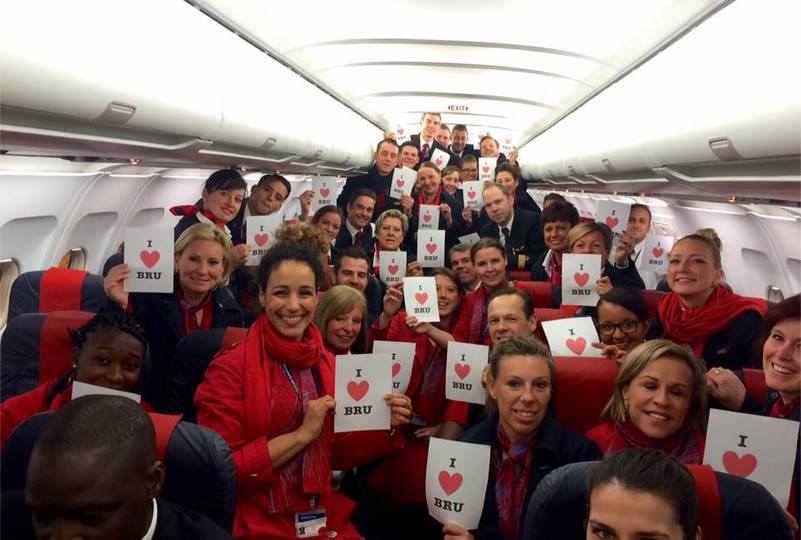 Brussels Airlines crew on their way to Frankfurt

Tens of our employees also went to the airport at Liège to help passengers there. I really cannot thank all of you enough for your voluntary efforts. It really warmed my heart.

The whole country, the whole world even, is looking at us and empathises with the airport, with you.

It will take a long while before we can accept and place the emotions caused by these cowardly attacks against our airport. We have been through a lot together, but this really topped it all. We always managed to come out stronger at the other end and I know that will be the case now, too.

Thank you to all first-aiders and all volunteers and to everybody who either from near or afar has expressed their support and sympathy during these difficult times. United we stand stronger!” 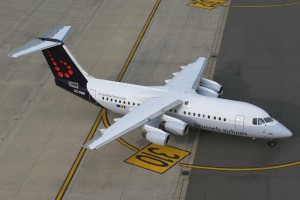 With its main operational base at Brussels-National Airport closed since the tragic events of 22nd March, Brussels Airlines did extremely well to maintain a reasonable proportion of its scheduled services. They managed this extraordinary feat by effectively relocating its European short haul operations to Antwerp and Liege, and its long haul operations to Zurich and Frankfurt. This was a major logistical operation, for a young and relatively small airline, and details of its current operations can be found here.

The ability to retain such a large operational schedule showed great team spirit by its staff who relocated to the temporary bases, and indeed a plane load of them travelled to Frankfurt, to assist the airlines passengers on their intercontinental flights, now operating out of the airport. As a member of Star Alliance, Brussels Airlines was also able to offer transfers to passengers on other services across the 26-member trans-continental alliance. With capacity at its home base likely to be restricted, even when it reopens, this will provide further challenges for the airline.

BSC (Belgium Slot Co-ordination), the non-profit organisation responsible for the allocation of slots at Brussels-National Airport has indicated that initially, only a few flights for Brussels Airlines would be allowed to operate from the airport. Once capacity could be increased, other airlines would be invited to forward their flight plans, a spokesman for BCS added. 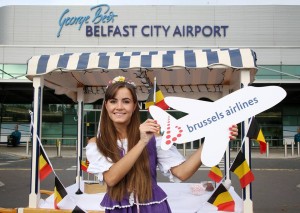 The launch of the new Brussels Airlines service to Belfast

In spite of all the airlines difficulties, the airline managed to launch it’s a new five-times-a-week service to Belfast City Airport. The inaugural service, on 27th March, was operated by BAe Avro RJ100, OO-DWF, which arrived from Antwerp, as the SN1551, at 15:45. It returned to Antwerp as the SN1552, landing there at 19:07. Unfortunately, the flights for the next two days had to be cancelled and presumably the airline was able to accommodate its passengers through changes it is allowing, or by re-routing.

How other airlines services to Brussels are affected

Aer Lingus has cancelled all its scheduled flights to Brussels, with its passengers being accommodated on flights to other cities. Ryanair on the other hand, promptly transferred its flights to Brussels Charleroi. The airline has indicated that all flights will continue to operate to Charleroi until at least 1st April. Jetairfly has indicated that it will fly from Ostend until “the end of the Easter holidays”. Thomas Cook is diverting flights to Liège, like Ryanair until at least 1st April. Most other airlines have simply cancelled flights, but Ethiopian Airlines is offering passengers a free bus service from Brussels North station to Paris Charles de Gaulle airport for all passengers booked on flight ET705 to Addis Ababa and beyond, which is now operating from Terminal 2A, departing at 22:15. The bus departure is scheduled for 13:00 in front of the entrance of the Brussels North train station. Passengers can board the bus by presenting their electronic ticket.