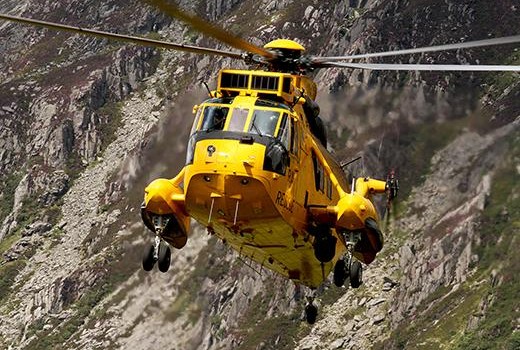 On 18th February, a parade to mark the disbandment of the Royal Air Force (RAF) Search and Rescue (SAR) Force, took place at RAF Valley in Anglesey, in Wales. Last October, after more than 74 years of continuous RAF SAR air operations – one of the longest peacetime operations conducted by any British military unit – the Service handed over SAR duties to the Maritime & Coastguard Agency and Bristow Helicopters Ltd., at RAF Chivenor, Devon. Chivenor was the last SAR base to hand over responsibility to Bristow Helicopters Ltd. Operated by the iconic yellow Sea King helicopters – which first arrived in 1978 – the last actual RAF SAR air operation took place on 4th October. This followed a request from Devon & Cornwall Police who asked for assistance in taking a 38-year-old-man found unconscious on Ilfracombe Beach to hospital. Following this final mission, a small number of Sea King crews continued to train at Chivenor to prepare them to provide cover for aircrew stationed in the Falkland Islands. 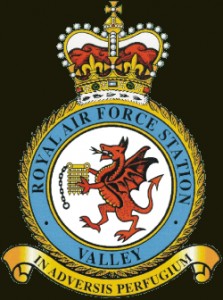 Among those paying tribute to the Force’s achievements, at RAF Valley event, were the Duke and Duchess of Cambridge, who were based in Wales for three years, while HRH Prince William, the Duke of Cambridge, served as a SAR pilot and aircraft Captain, completing 156 missions that assisted 149 people. When the service was privatised with the award of the contract by the Department of Transport to Bristow Helicopters in 2013, Prince William was critical of that decision and some believe this move influenced his decision to leave the RAF.

Speaking at the event RAF SAR Force Commander Group Captain Steve Bentley said: “The parade provides a chance for us to reflect on the achievements of the RAF Search and Rescue Force in the UK”.

He was reflecting on the fact that the SAR Force personnel have won 160 bravery awards, with its personnel having been awarded six George Medals, more than 50 Air Force Crosses and Medals, and more than 90 Queen’s Commendations for Bravery or Valuable Service in the Air.

He went on; “Not only has the Force contributed to saving many lives, but the pioneering work of the RAF SAR Force, and its predecessor, The Directorate of Air/Sea Rescue, developed many of the helicopter life-saving techniques which are in use today by others around the world”.

“The hallmark of Search and Rescue personnel, both past and present, has been their commitment, sense of teamwork and trust in each other, and selfless dedication to the task of saving lives. They can take immense pride in their achievements” he added. 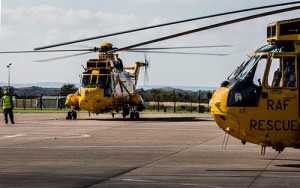 The history of the RAF SAR Force is a fascinating one and their achievements are undeniable. Their crews have saved tens of thousands of lives and continued to stand by on duty 24-hours-a-day until the final mission on 4th October. The RAF SAR Force, formerly known as the RAF Directorate of Air/Sea Rescue, was formed in 1941, following the Battle of Britain, Equipped initially with high speed launches and fixed wing aircraft; it grew to become an integral part of the Allied vanguard for the remainder of World War II.

After the war, RAF squadrons were equipped with a newly invented helicopter, specifically modified for search and rescue operations and their ability to hover gave them an ability to recover survivors that fixed wing aircraft did not have. The period also saw the remit of the RAF extended, from assisting military personnel in distress to civilians, both on land or at sea and the provision of rescue for civilian aircraft in distress under the 1948 Chicago Convention.

It was not until the 1960s, with the introduction of the Westland Wessex and later the Westland Sea King; that it was possible to replace marine craft in all sea and weather conditions, although RAF marine craft continued to operate into the 1970s.

Since official records began on 1st January 1983, RAF SAR helicopters in the UK have responded to a total of 34,122 callouts and have given life-saving assistance to 26,916 people.

RAF Valley SARTU crest (motto ‘That Lives may be saved’)

RAF Valley was one of six UK RAF SAR bases, from which RAF Sea King helicopters of 22 and 202 Squadrons, were operated. The Station opened on 13th February 1941, and was part of No 9 Group, Fighter Command. For the first few weeks of its existence it was called Royal Air Force Rhosneigr after one of the nearby villages some nine miles away, but was re-named Royal Air Force Valley on 5th April 1941. On 3rd March 1941, its first unit, No 312 (Czech) Squadron arrived from Speke (Liverpool) and its Hurricanes began flying convoy patrols over the Irish Sea. It continued to be predominately a fighter base, but by 1943, as enemy air activity diminished, RAF Valley became a terminal point for transatlantic flights by American aircraft being delivered to the Royal Air Force and to reinforce the United States Army Air Force Squadrons based in England.

The end of the war in Europe brought additional work to Valley, for less than two weeks after the German capitulation in May 1945; the United States Army Air Force began transferring its aircraft from Europe to the Far Eastern theatre, where the war against Japan continued. A great many of these aircraft passed through Valley and by September, when the move had been completed, 2,500 aircraft, each with 20 passengers and crew, had been dispatched. 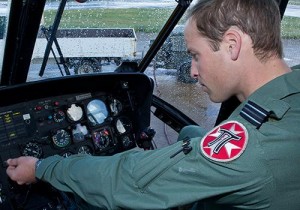 HRH the Duke of Cambridge who was based at RAF Valley for three years.

Control of Valley changed once more in April 1948, when it was passed to No 12 Group, Fighter Command, and the uncertainty of its future was resolved by the decision that it was to become a permanent Royal Air Force station. Meanwhile the Mountain Rescue Team, which had been formed in 1943, continued to turn out for crashed aircraft and stranded climbers in the Welsh hills.

After a relative period of inactivity, the base became one of Flying Training Command’s principal stations in 1951. Because of this there had always been an Army Rescue Launch on standby duty at Menai, some 18 miles away, whilst flying was in progress at Valley. In January 1955, they were relieved of this task with the arrival of Her Majesty’s Air Force Vessel No 2743 of No 1113 Marine Craft Unit at Holyhead Harbour. The Unit’s 68 foot high speed launches were later assisted in the air/sea rescue role by the Sycamore helicopters of ‘C’ Flight, No 22 Squadron, which arrived at the Station that May. The Sycamores were used briefly until replaced successively by Whirlwind HAR2s and HAR10s. In 1976, the Whirlwinds were in turn replaced by Wessex HAR2s.

The early 1960’s saw the first training of dedicated SAR Crews at RAF Valley by 3 Sqn CFS (H), a lodger unit parented by RAF Ternhill. This Unit, equipped with the Westland Whirlwind Mk 10, became the Search and Rescue Training Squadron. In the late 1970s, with reorganisation of the SAR fleet, Valley’s Helicopter Training Squadron was renamed yet again to become The Search and Rescue Training Unit (SARTU). 1985 saw the final withdrawal of the Whirlwind from RAF service when SARTU relinquished its mount of many years for the more capable and newer Wessex.

Today, the largest unit based at Valley is No 4 Flying Training School, which operates Hawk T1/T1A and Hawk T Mk 2 aircraft and incorporates the Central Flying School Advanced Training Unit. Valley also remains the home to SARTU, which was re-equipped with the Bell Griffin HT.1 helicopter in 1997 and is now part of the Defence Helicopter Flying School. It also operates three Agusta Westland AW139s. SARTU ensures that UK military aviators maintain SAR skills, as well as training rotary crews in mountain and maritime environments.

Royal Air Force SAR Helicopters have been involved in SAR operations in the Irish Marine Search and Rescue Region (IMSRR) in the past, but as capacity was built up, initially by the Air Corps and later by the Irish Coastguard (IRCG), this assistance declined.

Initially our medium-range SAR capability was centred on Shannon, supplemented by Dauphin helicopters operated by the Air Corps. The Shannon location was chosen because it is the most central within the IMSRR and had the facilities to support a 24-hour search and rescue service. 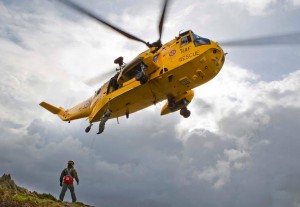 Thankfully prior to the privatisation of the UK Coastguard services, we had built up a significant SAR capability, also provided by a private contractor, but backed up by the Air Corps, both of which have modern and capable aircraft. It is a far cry from the 1980’s, but we should remember with gratitude the lives saves by the dedicated operations provided by the Royal Air Force SAR Force and remember the dedication to duty and sheer professionalism of all those involved in rescues off our coast.