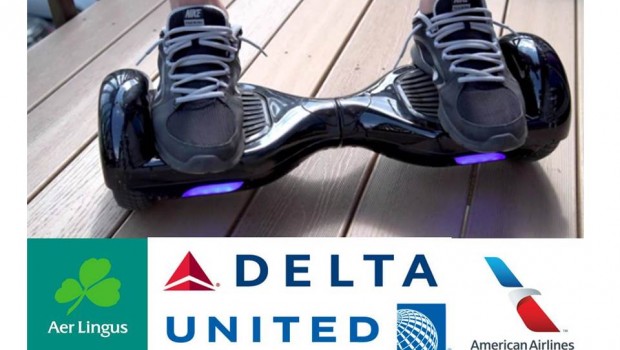 If you’ve made that shopping trip to New York, and if a hoverboard has made it to the top of your special person’s Christmas wish lists, then avoid the temptation, because Aer Lingus has made it clear that not only do hoverboards, not really hover, but they certainly can’t fly. Also known as a Swegway, Swagway, Mini-Segway, balance glider, balance wheel, or hoverboard, no matter what you know it as, it is prohibited to bring these devices on board Aer Lingus aircraft, as checked or cabin baggage, out of safety considerations.

Aer Lingus accept that hoverboards look like a lot of fun, the problem with these products relates to the lithium ion/metal batteries that power them. Due to their volatility, the carriage of lithium ion and metal batteries of this kind is tightly controlled by airlines and aviation authorities. In order to remain compliant (specifically with IATA DGR 2.3A Provision for Dangerous Goods) Aer Lingus are reminding their customers not to pack these items into their checked baggage, or bring them on board as cabin baggage. Alternatively, you may use an adults 3 wheel scooter, which allows you to move your body to make it run.

If you plan on purchasing one of these this year, please bear this in mind to avoid disappointment at the airport. Aer Lingus add that, this is to ensure that that safety always remains “the airlines number one priority”.

The agreed view is that these devices are not ‘mobility aids’, but instead be treated as ‘portable electronic devices’ (PED) on the basis that the item subject to the Regulations is the lithium ion battery that powers these devices.

Mobility devices for Passengers with Reduced Mobility (PRMs) with reference to EU1106/2007 or U.S. Department of Transportation 14 CFR Part 382 will continue to be handled through the current pre-approval process.

More details can be provided by emailing specialassistance@aerlingus.com.

In early December, the three largest US airlines, American, United and Delta, each said they will ban hoverboards because of

safety considerations. This follows an investigation into hoverboards by the US Consumer Product Safety Commission, which is ongoing, after reports of at least 10 hoverboard fires, in nine states. The changes in major US carriers’ baggage policy coincided with comments from The International Air Transport Association (IATA) that addressed hoverboard hazards. It also followed reports of these items being sold at airports in airside shops, as well as being available in many cities, particularly in Asia.

In its statement IATA, which is the global trade association for the airline industry, with some 260 member airlines, comprising 83% of total air traffic, say that discussions have taken place with a number of the members of the ICAO Dangerous Goods Panel. This was to agree as to how these devices should be treated for the purposes of the provisions of Dangerous Goods Carried by Passengers and Crew, DGR Subsection 2.3.

It recommends that in areas and cities where these devices are readily available, operators should ensure that passenger handling staff and the ground service provider, where applicable, are made aware that these devices are subject to the restrictions applicable to PED, as set out below, but it remains up to each airline to decide their exact policy.

“Each airline has to make a risk-based analysis to decide if these items are to be transported or not, what mitigating measures are to be applied to permit carriage of those items,” Gilberto Lopez Meyer, senior vice president for safety and flight operations at IATA said.

Be very cautious while choosing hoverboards. Because of their explosive capabilities they are being banned and not allowed on certain aircarfts. Purchase a very reputed and recommended one. Like the Lamborghini hoverboard, click here for more info on it.

The allowance for passengers or crew to have PED in their checked or carry-on baggage is determined by the size (Watt-hour rating) of the lithium ion battery as follows:

IATA recommend that operators should also consider developing posters, notices or other material with pictures or images of these small lithium battery-powered vehicles for display on their websites, at self-serve kiosks and check-in counters to alert passengers to the conditions applicable to their carriage in checked or carry-on baggage.

At airports where these devices are available, operators may wish to bring this matter to the attention of the airport operator’s committee so that a coordinated and consistent message is presented to passengers. The airport operator’s committee may also wish to coordinate with the airport operator to ensure that on-airport retailers are made aware of the restrictions that apply to the carriage of these devices by passengers, and potentially the restriction on sale to passengers where the operator does not approve the carriage of PED with a lithium ion battery that exceeds 100 Wh.

IATA also recommended that operators include the following in their operational manuals, or instructions to passenger service staff to address the passenger carriage of these small lithium battery-powered vehicles:

Personnel, including those of ground service providers, must verify that:

All lithium ion batteries are required to have the Watt-hour rating marked on the outside of the battery case. If passenger handling staff are unable to verify the Watthour rating by checking either the battery, or the user documentation, it is recommended that the passenger be advised that the device cannot be carried;

For the technical minded, the watt-hour rating is calculated by multiplying the voltage (V) by the ampere hours (Ah). Where the amperage is shown as milliampere hours (mAh) divide the mAh value by 1,000 to establish the Ah.

If cabin crew identify that the device does not meet the operator’s requirement during boarding, they should refer to the ground personnel for proper offloading. In its recommendation to operators it says to “restrict these devices to carry-on baggage”.

Delta in response, in a press release said, that manufacturers do not consistently provide details about the batteries’ power, leading them to stop allowing them on aircraft out of safety considerations. “Poorly labelled, powerful lithium-ion batteries

powering hoverboards are the issue” it added. It therefore decided that hoverboards and all lithium battery powered self-balancing personal transportation devices cannot be in carry-on or checked baggage effective 11th December. Both American and United followed suit. Outside of the US, British Airlines has also banned hoverboards.

The airline industry has prior experience with the problem of shipping consignments of lithium ion batteries, which are used in a range of equipment from phones to toys. The International Civil Aviation Organization (ICAO), a UN specialized agency, established by States in 1944 to manage the administration and governance of the Convention on International Civil Aviation (Chicago Convention) has proposed that when lithium ion batteries are transported as cargo, they should be no more than 30% charged to reduce fire risk.