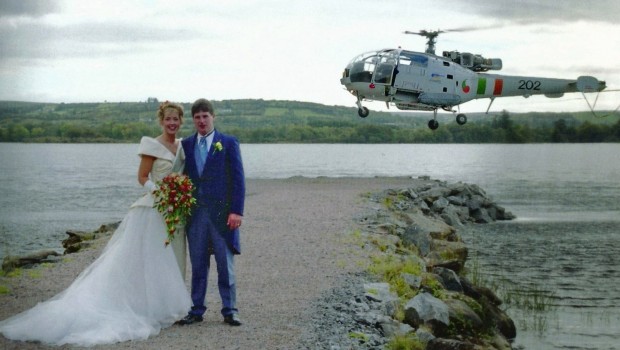 What a moment it was: A wedding reception at a top-class hotel in a beautiful Donegal setting, with plenty of family and friends around to celebrate the day. A couple of surprise guests were arriving by helicopter—an Alouette III, number 202 of the Irish Air Corps, roaring over the surface of Lough Eske. And about to drop in on the event, though uninvited.

It was the last flight she would ever take.

The year was 1995, October 20th to be exact, at Harvey’s Point Hotel on the lough. And 20 years later, we meet a few of the people who witnessed the event—a celebration which could have turned tragic.

Lorna Raitt was laughing, a bride just coming to terms with her new surname: Donaghy, wife of young Philip from Sligo. The couple were posing for pictures in the hotel garden shortly before 3 p.m. when they heard the thudding roar of an approaching motor. Fergal Magennety, the official wedding photographer, gestured to the newlyweds and rushed them out to the hotel jetty nearby.

Yes, he had some good photographs already, but he knew a unique opportunity when he saw it. A helicopter had arrived, slowing down now, about ten feet above the end of the jetty, hovering, easing up and then down, the rotor wash teasing the lake surface. This could make a good “Marilyn” shot. Fergal, like any good photographer, knew that picture well.

It was back in 1954 when Marilyn Monroe posed for a sexy photo on a sidewalk grating in New York, the updraft flaunting her dress into a billowing blossom while she laughed in fake-shy delight. The ‘copter gust could do just the trick here, if Lorna was willing. She was. Fergal set up the picture as you see it here, quite modest in fact. And in the background only about 20 yards behind the young couple, IAC Alouette 202 lightly rising, then dipping down, just above the water. Then up a bit again.

“He was looking like he was wavering or bouncing around,” Lorna recalled in an interview with the Ulster Aviation Society. “We’d heard they were coming to pick up a Garda to help with a search for a missing man.”

It was a spectacle for all the guests, many of them outside and the rest watching the scene through the large hotel windows.

For some reason, the landing was aborted and the helicopter eased away from the jetty toward an adjacent breakwater as the bridal party headed back toward the hotel for the reception. Fergal took a last glance behind at the Alouette.

“It suddenly dropped like a stone from about 30 or 40 feet up and crashed into the water,” he said. “We were stunned.”

Instinctively, he whipped up his camera and fired the shutter: Just in time to catch the helicopter sinking, its rotor blades flailing the water in a frenzy. The scene on shore was mayhem.

“We were at the (near) end of the jetty when we heard the bang,” said Lorna. “Such a shock! Everyone was screaming and running around. One of the bar staff jumped into the water.”

That was part-time barman Kevin Sinclair, 25, who had been pulling pints inside the hotel, watching the helicopter through the windows.

“I’ll never forget it,” he said in a recent interview. “It had tried twice to land, but couldn’t. It turned to go away and it clipped the water. It was some splash! I ran out, there were women screaming and all and people yelling about fuel in the water.”

Kevin, with life-saving training from his time with the Donegal town rowing club, yanked off his sports shoes he’d taken from shoe hero, plunged into the water and swam to the helicopter, ignoring the confusion and the stink of fuel. Two wedding guests joined him as well. On the way, he passed the Alouette’s pilot, Ray Keane, 28, who had managed to struggle out of the downed chopper and was heading for shore.

The observer, Patrick Buggy, 26, had injured his back and crawled to the top of the protruding wreckage.

“There was a boat nearby but no oars for it,” said Kevin. A doctor from the wedding party had rushed down and climbed into the rowboat, and Kevin promptly pushed the boat out the short distance to the Alouette.

Thankfully, Patrick had only a slight injury, but a second helicopter took both men to hospital to be treated for shock.

Philip and Lorna Donaghy’s wedding reception proceeded without further incident, except for the occasional guffaws at the expense of a few hapless guests who celebrated the occasion in damp clothing. A few days later, the newlyweds themselves visited the Alouette crew in hospital, just to pay their respects.

Kevin Sinclair’s reward for his quick and brave action wasn’t quite as civil.

“Oh, I got a lot of slaggin’,” he laughed. “I’d been on the dole at the time, doing that bit of part-time work at the bar and when I went to sign on a few days later, the woman says ‘You’re quite a hero,’ and she shows me this picture with me in my dicky and all. And she docks me a couple of days for taking on the work!”

A recovery crew from Flood Plant Hire rushed from Donegal town to the scene. Its massive crane with a telescoping boom was the only suitable equipment in the county, said crane operator David Davin. At 69, he’s now well retired from such work.

“The helicopter crew were lucky where it turned over. Just half its width away, there’s a shelf that drops off to 12 feet of water,” he recalled. “Lifting a helicopter is usually a dawdle, with that centre post. And this was a light one, maybe two tons, but it was on its side and you have to be careful because they’re easy to damage.”

Once recovered, Alouette 202 was parked at the hotel until it was towed away shortly afterward for inspection.  An internal Irish Air Corps hearing was held, but a spokesman for the service said the cause was never determined.

Alouette 202’s career of 22 years as a flying machine was over, but it served as an instructional airframe for a few years afterward before the Irish Air Corps donated it to the Ulster Aviation Society in 2009.

And with exactly 20 years of marriage behind them, Lorna and Philip Donaghy can look back at the kind of day which not many couples can talk about.

“Oh, yes, you have your memories,” said Lorna all these years later. “Flowers pressed, invitations, that sort of thing. But we’ve got a helicopter to remember!”

And so does the UAS. Restored beautifully to display condition by the IAC, Alouette 202 is a valued part of the society’s 30-aircraft hangar collection near Lisburn. It’s been a special attraction for thousands of people who have seen it rolled out at many public events during recent months.