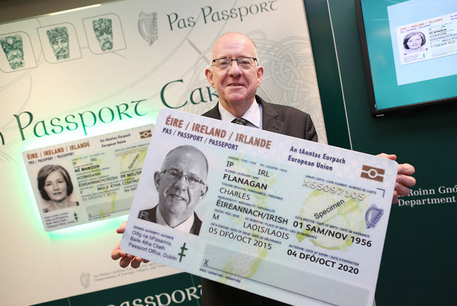 In January, the Minster for Foreign Affairs and Trade Charles Flanagan, launched a new Irish Passport Card and gave the target date of availability as July 2015. Unfortunately prior to that date, the Department was forced to announce the postponement of its introduction until the end of September. At that time, the Department said that the delay was to allow an improvement in the durability of the card, by altering its polycarbonate structure, and ensure that when the card was issued to the public, that it meets the highest international standards of polycarbonate cards.

On 2nd October, the Minister for Foreign Affairs and Trade, Mr. Charlie Flanagan T.D. finally launched the new Irish Passport Card, which is available for use in 30 European Countries. He also confirmed that applications for the new passport card are now being accepted on-line from Irish citizens.

To recap, this passport card is a new innovation that will allow Irish citizens to travel within all thirty countries of the European Union and European Economic Area (EEA). The EEA includes EU countries (27 excluding Ireland, Austria, Belgium, Bulgaria, Croatia, Republic of Cyprus, Czech Republic, Denmark, Estonia, Finland, France, Germany, Greece, Hungary, Italy, Latvia, Lithuania, Luxembourg, Malta, Netherlands, Poland, Portugal, Romania, Slovakia, Slovenia, Spain, Sweden and the UK) and also Iceland, Liechtenstein and Norway. Citizens can use the card alone for travel to these countries but the Passport Book must be used for all other foreign travel, including to the United States and Switzerland. While Switzerland is part of the single European market but is neither an EU nor EEA member even though Swiss nationals have the same rights to live and work in the EU as other EEA nationals.

All adult Irish citizens who already have a valid Irish passport book are eligible to apply for the new card, which is designed to fit readily into any wallet or purse. They must be over 18 years of age and already in possession of a valid passport book. Their passport card personal details must be exactly as they are on the applicant’s passport book. It has a maximum validity of 5 years or the remaining validity of the passport book and there must be at least 30 days validity on the existing passport book. The application fee is €35 plus a credit card transaction cost. Additional delivery costs outside Ireland are approximately €5.

Applications can be made online via the Department of Foreign Affairs and Trade website (here) or through the free app for smart phones and tablet devices which is available in iOS (via Apple App Store), Android (via Google Play Store) and Microsoft (via Windows Store) formats. 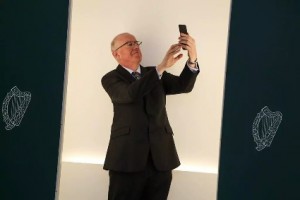 Speaking at the announcement of the new service, Minister Flanagan said;

“The introduction of the passport card is a significant innovation that will enhance the travel experience for Irish people as they go on holidays or business trips to thirty countries throughout Europe. Citizens who apply will need to have a valid passport book already but they will be able to use the passport card alone for travelling to such popular destinations as Spain, France and Italy.

“This an Irish-led and Irish-designed project that combines cutting edge technology and security features with ground-breaking levels of user-friendliness and flexibility.”

“I am particularly proud that we are one of the very first countries in the world to introduce such a passport card. It represents a very positive story of Irish-led creative thinking and innovation and illustrates that we are very much pioneers in this area.

It also underlines the Government’s commitment to the expanded provision of public services online.”

The passport card represents the culmination of co-operation among some of Ireland’s leading technology and security companies. This project is leading the way in secure Machine Readable Travel Documents (MRTD) deployment and further demonstrates that Ireland is at the cutting edge of innovation in the technological arena. The consortium comprised both large and small companies, led by DLRS, with security design and APP development supplied by Absolute Graphics in Wicklow and Purple Pod in Meath. The final product is a state-of-the-art polycarbonate supplied by HID in Galway.

The passport card enrolment process relies on cutting edge technology that adheres to the highest levels of security to ensure that applicants are safe and secure at all times while applying for their card. The software solution has been developed to work across a number of mobile platforms including iOS, Android and Windows Phone and also features a secure website for desktop users. The enrolment process allows users to submit a passport compliant photo taken on mobile phones or upload a suitable photo on the website where advanced biometric algorithms will test each one to ensure ICAO Standards are reached. Once all verification checks have been achieved, the user can pay their fees through the secure payment portal.

The Passport Service has the capacity to process 3,000 Passport Card applications per week. Depending on demand it is estimated that applications will be processed within 20-25 working days. However, this will be kept under review.

Earlier this summer Minister Flanagan launched a new guide to completing the existing passport application form, designed to give clear and concise instructions, and greatly reduce the most common errors and speed up processing times. The guide includes sample screenshots of the more complex sections of the application form, with information on how to complete them properly (see here).

The Passport Service again wishes to point out that since 30th June 2013, all postal passport applications must be submitted through the passport express service, operated on behalf of the Passport Service, by An Post and by the Post Office in Northern Ireland. Unfortunately, the Department of Foreign Affairs and Trade was forced to suspend the service, due to the industrial action affecting An Post, and were forced to introduce temporary arrangements from 5th October, onwards. These arrangements included drop-off boxes for applications at the reception areas in the Dublin and Cork Passport Offices and at the Irish Aid Office in Limerick. Fortunately on 6th October, the Minister was able to announce the resumption of normal Passport Express service arrangements, following the suspension of the industrial action at An Post.

Those who had submitted applications via the contingency arrangements on 5th and 6th October were being contacted by Passport Service officials to see if they wish to receive their passport books via Passport Express, or to collect them in person from the Dublin or Cork Passport Offices.

The new Irish Passport Card, another option when travelling →