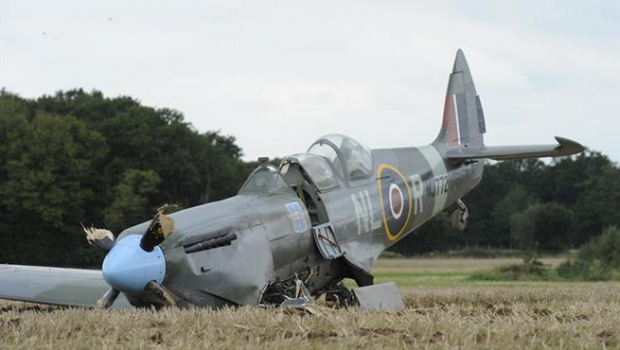 The aircraft (D-FMKN) which served as ‘159’ from 1951 to 1963 received “substantial damage” on 3rd May 2012 when the landing gear malfunctioned and its pilot made a belly landing at the grass strip at Bremgarten close to the French/Swiss border North of Basel. The aircraft returned to the air at Bremgarten on 9th April 2013. 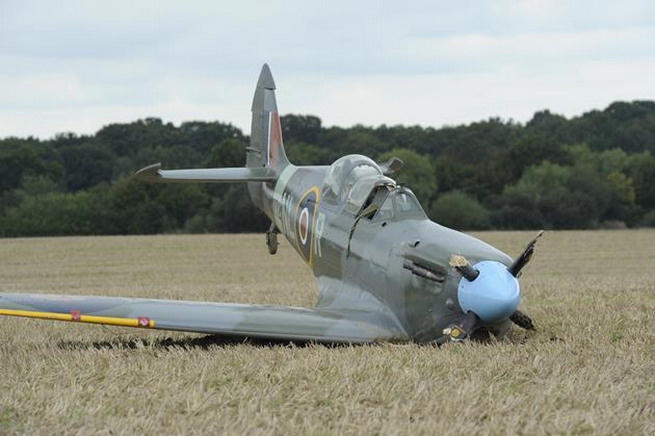 A brief history of “159” from www.warhistoryonline.com

On the 20th December of that year the Spitfire was delivered to RAF Lyneham, Wiltshire and later, on 20th January 1944 MJ772 was assigned to No.341 Squadron (Alsace). 341 Squadron was based at that time at Perranporth in Cornwall. The squadron tactical code was ‘NL-R’. No.341 Squadron was formed on 15th January 1943 at RAF Turnhouse situated near Edinburgh, Scotland, with personnel from the Free French Air Forces (Forces aériennes françaises libres), in particular the personnel of the Free French Flight (also known as Groupe de Chasse n°1 « Alsace »).

The unit was equipped with Spitfire VB’s, the first commander being Squadron Leader René Mouchotte. The squadron moved to RAF Biggin Hill on 21 March 1943 and, re-equipped with the Supermarine Spitfire L.F Mk.IXs, began to take part in sweeps over France. The squadron then moved to Cornwall on 11 October 1943 for similar operations over Brittany,relocating to RAF Merston on 14 April 1944 to join No. 145 Wing. Interesting note, the famous ace Pierre Closterman had his first aerial combat flying as the wingman of Squadron Leader Mouchotte. While in Cornwall, MJ772 carried out about 50 operational sorties before being damaged as “Cat.Ac FB”.

After repair, the fighter was on the 22nd June 1944 assigned to Squadron No.340 (Ile de France), whose tactical code was “GW-A”. No.340 Squadron RAF (Free French) was formed at RAF Turnhouse in Scotland on 7th November 1941 as part of “Le Groupe de Chasse IV/2 Ile de France”. The squadron was first equipped with Spitfire Mk I fighters. Becoming operational on 29th November 1941 with the operational code ‘GW’, they flew fighter sweeps from April 1942 over northern France. The squadron was based at Redhill Aerodrome (Gatwick) and at RAF Biggin Hill. In spring 1943 Squadron No.340 joined the 145th Wing of the Second tactical Air Force (2 TAF) and flew fighter covers for the Normandy landings.

Repairs were carried out on her and the Spitfire was back on duty in February with No.83 GSU. On 19th July 1945, No.49 MU (Maintenance Unit) were ordered to move aircraft, including MJ772, to Heston Aircraft, where it underwent a major inspection, before awaiting collection in December 1945. A move to 29 MU High Ercall, Shropshire, followed in January 1946, where it stayed until sold to Vickers Armstrongs Ltd in July 1950. As Vickers had a contract from the Irish Air Corps for two-seat Spitfire trainers, MJ772 was one of those converted. This Spitfire flew with the Vickers test serial G-15-172 and was Serialled 159 on delivery to the IAC at Baldonnel in 1951. 159 served with “A” Flight Fighter Squadron of the IAC for a number of years, until withdrawn from use in January 1960 with 1402 flying hours.