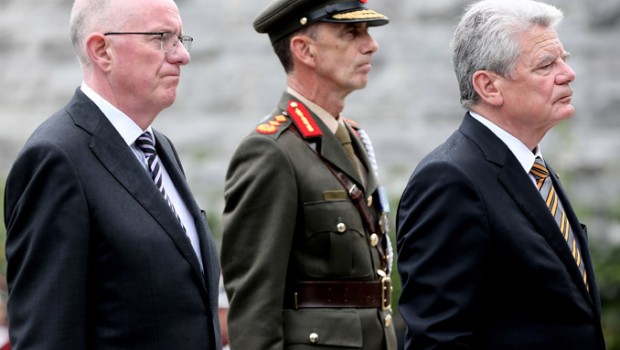 The President of the Federal Republic of Germany paid a state visit to Ireland from the 13th to 15th July. According to the German embassy in Dublin, the focus of his visit to Ireland was on political talks, which included meetings with the President of Ireland, the Taoiseach and Members of the Oireachtas. President Gauck had also met business people during his visit to Dublin and his discussions “concentrated on European policy matters and Ireland’s approach to the National Debt and financial crisis”. The President, who was accompanied by his wife, Daniela, also visited Co. Galway and Co. Clare in the west of Ireland.

However, in aviation terms, the highlight of his visit was his mode of travel, Luftwaffe (German Air Force), Airbus A340-313X, 16+01 (c/n 274). This ex Lufthansa aircraft was delivered to the airline as D-AIGR on 18th May 1999 and has been with the Luftwaffe as 16+01 since 30th March 2011. The choice of such a large aircraft for this visit was surprising and while the Luftwaffe has two, it also has two smaller Airbus A319-133X CJs and four Bombardier Global 5000s. Until 2011 the government and its officials used two Airbus A310-304s.

The German Air Force Airbus A340, 12+01 as it taxied at Shannon. Malcolm Nason

Germany is a key political and economic partner for Ireland and the visit was seen as a valuable opportunity to build on our close ties. It is also a crucial trading partner for Ireland with bilateral trade worth over €20 billion and this is expected to grow further.

The president’s aircraft touched down in Dublin on Monday 13th July at 12:50, using the callsign ‘GAF883’. A ceremonial arrival was held at Áras an Uachtaráin, with full military honours, including a flypast by four Air Corps PC.9s. He then met with President Higgins and attended a wreath-laying ceremony at the Garden of Remembrance. There was then a meeting with An Taoiseach and a Civic Reception at City Hall followed by a State Dinner at Áras an Uachtaráin. On the second day of his visit, he paid a courtesy call on the Ceann Comhairle and Cathaoirleach in Leinster House. His programme also included business engagements with German software company SAP and a roundtable discussion on Strategic Banking Corporation of Ireland (SBCI) funding for SMEs, before visiting the Book of Kells in Trinity College. Later that evening he departed Dublin airport at 19:46, with the A340 using the same callsign ‘GAF883’. 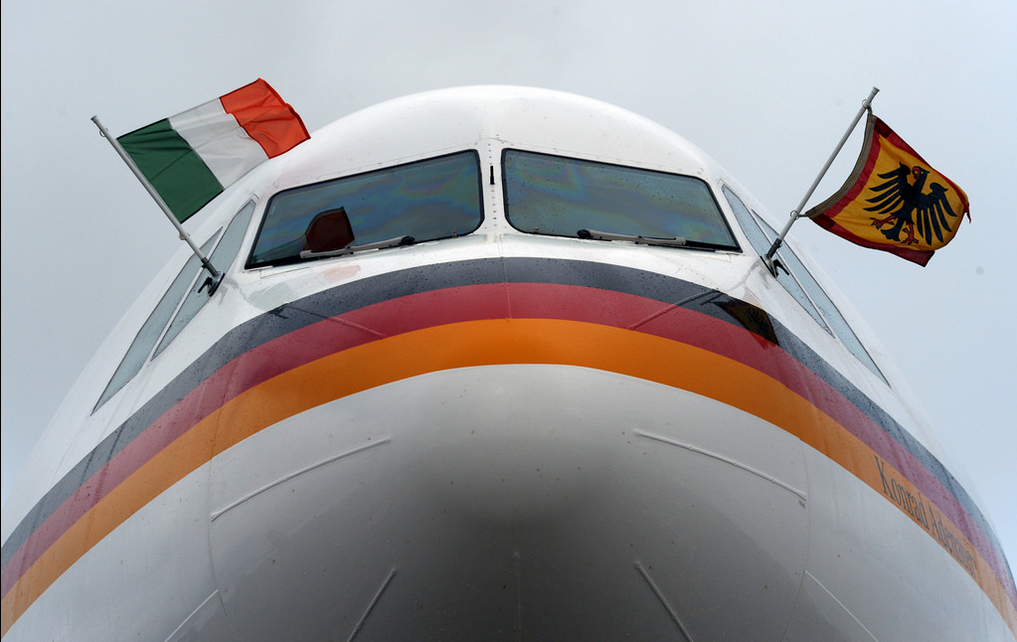 The Airbus with the national flags used on arrival and departure

The next phase of his visit was to the West of Ireland, where so many of his country people come each year on holiday. Some 540,000 German tourists visit Ireland each year, making Germany one of our top three tourism markets. President Gauck travelled to Galway, where he stayed in the luxurious Glenlo Abbey Hotel. His programme on the 15th included a visit to the National University of Ireland, Galway. He attended a roundtable seminar on ‘Human Rights and Development’ with President Higgins, and was conferred with an honorary degree by the university. He also visited Droney Farm in Balklyvaughan, County Clare and the Cliffs of Moher in County Clare before returning to Shannon for his departure to Berlin. 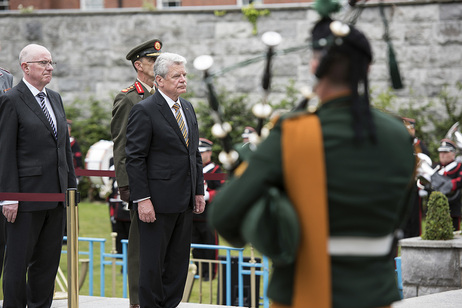 The German President at the Garden of Remembrance on the State visit to Ireland.