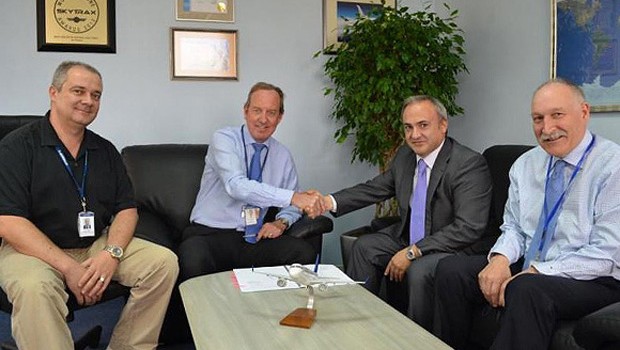 BA CityFlyer has selected FTEJerez to launch their Multi-Crew Pilot Licence (MPL) programme, to train their future pilots. BA CityFlyer is now recruiting cadets for the MPL course, to commence training at FTEJerez, in October and November 2015. Successful candidates will train in Jerez for the first 54 weeks, before moving on to Embraer type rating training, with BA CityFlyer, in the UK.

Captain Steve Cook, BA CityFlyer Flight Training Manager, commented: “We are delighted to be launching another MPL scheme with FTEJerez. Both companies have a longstanding relationship with each other. This partnership will result in well-motivated, highly trained graduates to fly our modern fleet of Embraer Aircraft.”

FTEJerez is a dedicated aviation and airline pilot training academy with a long history of successfully training ab initio pilots. It is a direct descendant of the prestigious British Aerospace Flying College at Prestwick, Scotland. In 1999 the school was relocated to Jerez and became Flight Training Europe, S.L. (FTEJerez) in 2003. 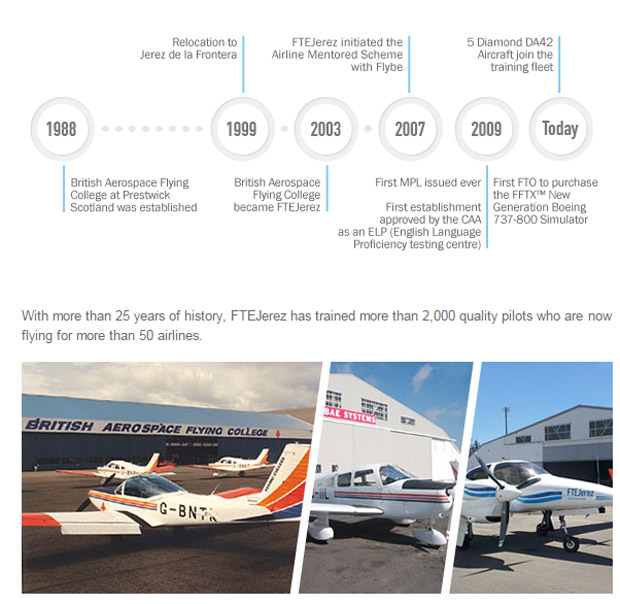 The schools has its roots in the British Aerospace Flying College at Prestwick but relocated to Jerez in 1999 and became Flight Training Europe, S.L. (FTEJerez) in 2003.

The Andalusian city of Jerez de la Frontera, is probably better known for Spain’s Sherry wine, as a horse capital and of course as the home of Flamenco. Now it is home for cadets from a wide range of prominent airlines such as Aer Lingus, British Airways, BA CityFlyer, Cityjet, Emirates, Flybe, Qatar Airways, Vueling and many more, where they are trained to be the present and future captains. The high quality of the pilot training provided by FTEJerez is widely recognised. It has become an industry benchmark by airlines. It has been chosen to select and train a number of sponsored and mentored cadets for Airlines, since the college commenced operations over 25 years ago. It runs a truly integrated EASA ATPL course with all training conducted in EU airspace. More importantly, it is consolidated in one training location which has all the essential elements, the right environment, equipment, facilities, expertise and the experience needed by customers today.

In addition to being one of the most prestigious airline pilot training organisations in Europe, FTEJerez offers an ATC course that gives its ATC cadets a unique training environment and is situated next to the Jerez International airport. FTEJerez became the first training institution to be certified to conduct ATC training in Spain by the Spanish Regulator, the Agencia Estatal de Seguridad Aérea (AESA), following the liberalisation of air traffic control and training of air traffic controllers in Spain. The close interaction with its international pilot training students, the limited number of students on each course, and the fact that all training is conducted in English, has set FTEJerez apart from other institutions offering ATC training, since the first generation of its ATC controllers commenced training in 2011. 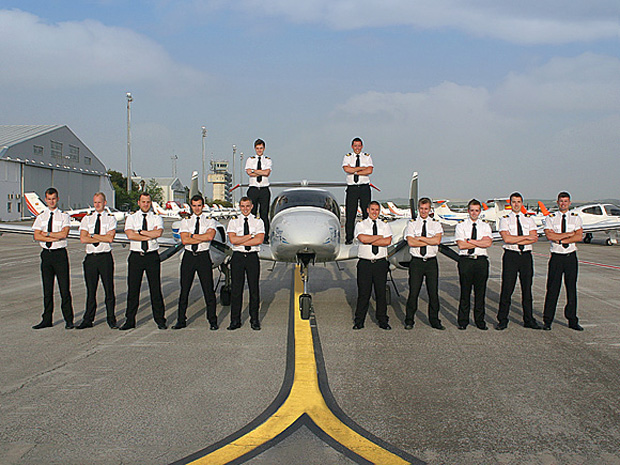 To celebrate the graduation of Courses 135 and 136, featuring Aer Lingus and British Airways cadets and self-sponsored students, a Gala Dinner was held at the Museo de la Atalaya, a beautifully renovated classic 19th century venue, on 17th April.

Both Captain Kelly and Captain Bannister made special mention of the huge effort the graduates had made with their training. Special reference was also made about the importance of families in supporting the cadets’ professional flight training endeavours.

Kazakhstan’s national carrier Air Astana has also decided to renew its long- term training partnership with FTEJerez. It was awarded a tender to train the airline’s cadet pilots for the next 3 years, with the Air Astana cadet pilots commencing their training during May and August. They will be joining self-sponsored trainee pilots, as well as cadets from other partner airlines, on their respective courses.

The relationship between FTEJerez and Air Astana has been in place since 2013 and saw the first group of Air Astana cadet pilots graduate from FTEJerez in October 2014. Following the award of the latest tender, Captain Filippos Siakkas, Training Director at Air Astana said: “Due to rapid growth in recent years, we at Air Astana have relied on outside flight training partners to prepare, train, and meet our goal of providing only the highest quality pilots for our airline. FTE Jerez has been instrumental in helping us achieve this goal and has been able to consistently maintain the high quality standards that we demand here at Air Astana: they are more than a service provider; we see them as a true partner. Their professionalism and dedication to the highest of aviation training standards helped us build the solid foundation needed to fuel the continued growth and success of our airline well into the future”.

For FTEJerez’s CEO, Oscar Sordo, Air Astana’s decision to again make FTEJerez their training institution of choice, “is further proof of the high regard the international aviation community has for the quality training FTEJerez provides. We are extremely proud of our partnership with Air Astana and we are delighted to be further entrusted with the delivery of only the best trained pilots to be Air Astana’s First Officers and future Captains”. 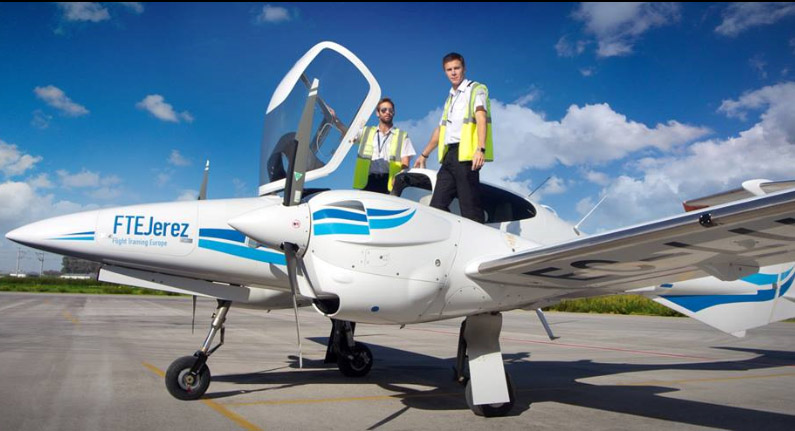 Diamond DA 42 NG’s are a new addition to the FTE Jerez fleet backing up the existing fleet of six PA34 Seneca’s.

The success of FTEJerez is due to the quality of its training fleet, its instructors and a range of dedicated resources. Its aircraft fleet and simulators have been carefully selected to ensure optimum training value. The large fleet of Piper aircraft have identical cockpits and are all fitted with exactly the same avionics and flight instruments in the same layout. This ensures that no re-learning is required between sorties. Its 20 Piper Warrior and six Piper Senecas are backed up by Diamond DA 42 NG’s, which are the latest addition to the FTEJerez training fleet. It has five, equipped with the Garmin G1000 glass cockpit, to ensure a smooth transition to flying a modern jet airliner. The Pipers have the classic analogue instrument panel, designed to ensure solid instrument flying skills. This becomes particularly relevant during IFR training. This is often how the flight displays will be configured as part of the airline selection process to check that the training foundations are solid. Needless to say the simulators available mirror the cockpit layout of the aircraft.

FTEJerez’s Flight Simulation Centre houses all of its simulator training devices and additional classrooms, as well as providing realistic dispatch material. It also has twelve dedicated classrooms, all equipped to support a range of delivery media, including Wi-Fi coverage. Additionally, as an authorised CAA International Exam Centre, there is a dedicated exam room. These facilities are housed on a single campus with high quality accommodation, with single en-suite air conditioned student rooms, with broadband internet, television and telephone connections in all 222 rooms.