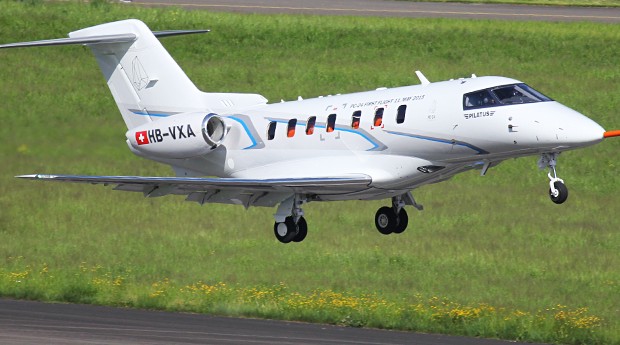 On 11th May, the first ever Pilatus PC-24, prototype P01, registration HB-VXA took off on its maiden flight from Buochs airport, in the Canton of Nidwalden in central Switzerland, at 10:00 local time. Just under 1,800 Pilatus staff, all of whom are directly or indirectly involved in the PC-24 project, were there to applaud, what the manufacturer described as a ‘Super Versatile Jet’ (SVJ), taxied for takeoff. The new business jet flew across central Switzerland for a total of 55 minutes with the flight going exactly as planned with no problems whatsoever.

The PC-24 is capable of exceptional performance, and this maiden flight was a first opportunity to showcase some impressive credentials. The twin-engine business jet took off from runway 07 in just under 600 m and climbed to 10,000 feet (approx. 3,000 m) in around three minutes, where the two pilots completed a series of meticulously planned tests. The maiden flight followed a route across central Switzerland – from Altdorf to Brünig via Engelberg. 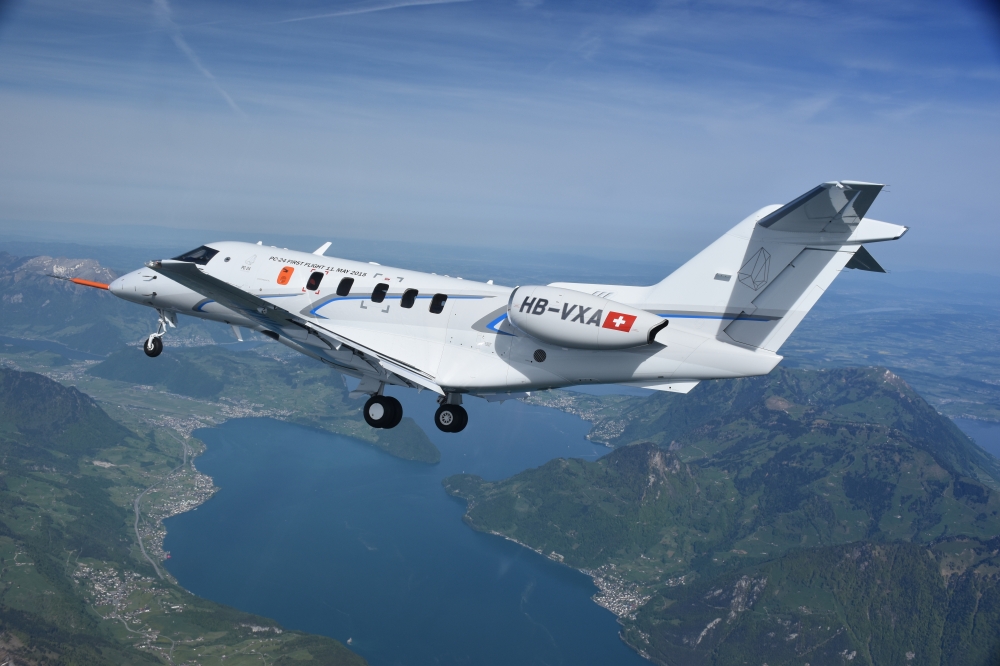 Test pilot Paul Mulcahy, who has some 11,000 hours under his belt, flew the PC-24 as pilot in command. He has already test flown countless aircraft types and has acquired a wealth of experience on twin-engine business jets. “Everything looks great so far! Beautiful handling – the PC-24 flies just as expected – a real Pilatus aircraft!”, reported his colleague and second test pilot, Reto Aeschlimann, by radio from the cockpit. Over the past few months, the PC-24’s handling characteristics had been trialled and refined during numerous tests using simulators and models placed in a wind tunnel. As part of the development team, the two pilots were involved in these tests and their role during the maiden flight was to verify the accuracy of the theoretical assumptions.

Throughout the flight the PC-24 was accompanied and monitored by a PC-21. As is normal on maiden flights, the PC-24 landing gear was not retracted. Twelve flight test engineers watched the flight from the ground as they kept an eye on a stream of real-time flight data received from the PC-24. Had the need arisen, these experts could have given the pilots crucial decision-making information, yet another means of ensuring the safest possible conditions for this test flight.

As the first Swiss business jet, the first flight was an emotional moment and another major milestone for the aircraft and the company. Not surprisingly, the assembled staff and onlookers burst into another round of applause as the wheels of the PC-24 gently came into contact with the tarmac at the completion of the flight.

A total of three PC-24 prototypes will be built and used to complete a rigorous test programme of some 2,300 hours over the next two years. Fewer than half those hours will actually be flown in Switzerland; the remainder will be flown elsewhere. Certification and initial deliveries of the first aircraft to come off the production line are planned from 2017.

Background and operations of the company

The Pilatus Aircraft Ltd was founded in 1939 and is the only Swiss company to develop, produce and sell aircraft to customers around the world. These range from the legendary Pilatus Porter PC-6 to the best-selling PC-12, a single-engine turboprop, the PC-9 used by the Irish Air Corps and the latest PC-21, described the training system of the future. Its latest bizjet development, the PC-24, is the world’s first ever business jet designed for use on short unprepared runways. Based in Stans, some 35 miles (56 km) south of Zurich, the company is certified to ISO 14001 in recognition of its efforts for the environment.

The Pilatus Group includes three independent subsidiaries in Altenrhein (Switzerland), Broomfield (Colorado, USA) and Adelaide (Australia) as well as a joint venture company in Chongqing (China). With over 1,800 employees at its headquarters, Pilatus is one of the largest employers in Central Switzerland. It also provides training for over 100 apprentices in 11 different professions.

Pilatus Business Aircraft Ltd based in Broomfield, Colorado, was established in 1996. 70% of all PC-12s which come off the production line in Stans are finished to customer specifications (interior and exterior livery) in Colorado. This subsidiary is also responsible for PC-12 marketing, sales and servicing activities in North and South America. On 23rd February it delivered the 1,300th PC-12 in a ceremony to California-based airline, Surf Air. Pilatus’ This was Surf Air’s 4th new PC-12 NG delivery since placing it order last year for 15 PC-12 NG aircraft, with options for an additional 50.

Pilatus Australia Pty Ltd was set up in 1998 as PC-12 sales and marketing support centre. It is responsible for the markets in Australia, New Zealand, Papua New Guinea and on the Pacific Islands.

Altenrhein Aviation Ltd (AAL), also a fully-owned subsidiary of Pilatus Aircraft Ltd, started its operations on 1st January 2003. Located in eastern Switzerland at St. Gallen-Altenrhein Airport, AAL specialises in the maintenance, modernisation and overhauling of Pilatus PC-12s and PC-6s, as well as other business and regional aircraft.

Pilatus Aircraft Industry (China) Co., Ltd., based in Chongqing, was founded in 2013 and produces structural components for the PC-6.

Pilatus is supported by over forty carefully selected independent sales and service centres worldwide, all of which help Pilatus to provide first-class customer service at local level. On 28th April it appointed Oriens Aviation Ltd as an Authorised PC-12 Sales and Service Centre for the British Isles. The new company will be responsible for all future sales and maintenance of the PC-12 turboprop in this region. There were approximately 40 aircraft imported into the UK and Ireland since 1994, making the PC-12 is extremely popular in this market. The British Isles have the highest number of airfields per square mile anywhere in Europe, many of which are grass strips and small runways. “If the Sport Utility Vehicle gave the people of the UK and Ireland motoring versatility – the PC-12 does the equivalent for the skies” said Edwin Brenninkmeyer, Director of Oriens Aviation.

Currently based in Biggin Hill, in Kent, Oriens Aviation is now focusing on building a strong sales and service operation and is currently evaluating a number of options for its new main base, to be located in the southern half of the UK.

The 100% newly developed PC-24 is the first time that traditional Pilatus values such as versatility, efficiency and Swiss precision have been combined in a jet. On 1st August 2014 – on Swiss National Day – Pilatus Aircraft Ltd officially unveiled the first PC-24 prototype. Some 35,000 spectators watched as the prototype left the production hangars at Buochs. The aircraft which combines the versatility of a turboprop with the cabin size of a medium-light jet, and the performance of a light jet. It’s a plane that simply doesn’t fit into any of the existing business jet categories. That’s why Pilatus created the Super Versatile Jet (SVJ) category. The PC-24 has been engineered to be ‘off-road’, compatible from the beginning of outstanding short-field performance – even on unpaved runways. It opens up an incredible level of mobility giving access to almost 100% more airports around the world and to more than 21,000 in total. No other business jet can operate from runways as short as 2,690 feet (820 m).

Pilatus opened the order book for the aircraft at the European Business Aviation Conference & Exhibition (EBACE) in May 2014, where it exhibited a full scale mock-up of the aircraft. It managed to sell 84 PC-24’s at that event despite the project only being unveiled to the general public exactly a year earlier. In line with its already ambitious programme EASA and FAA Type Certification and first deliveries are expected beginning 2017.

Pilatus describes the PC-24’s cabin as like a penthouse but on the 5,000th floor! See PC-24 Brochure . Only the finest-quality materials have been used to create the interior – from soft leathers to rare hardwood cabinetry – to create a bespoke interior that reflects the latest standards of comfort and functionality. Thirteen extra large cabin windows flood the interior of the PC-24 with bright, natural light. The generously sized cabin, with its continuous flat floor, allows for an exceptional amount of headroom for both passengers and crew. No other business jet offers this much cabin space at this price level. The interior of the PC-24 has been designed from the outset for quick and easy reconfiguration. Each passenger seat features quick-change capability enabling its addition or removal in just a few minutes. The aft partition is movable so you can easily enlarge the passenger cabin or increase the baggage compartment volume for each and every flight. The PC-24 features also a fully enclosed, externally serviceable private lavatory. 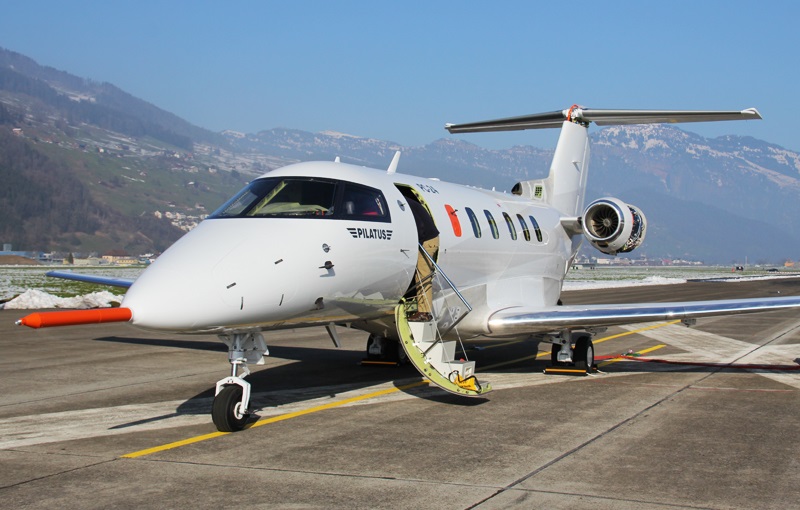 Every iconic product incorporates at least one hallmark feature and with the PC-24 it is a standard pallet-sized cargo door, a first for a business. Its dimensions are simply outstanding, so loading even the bulkiest of items has never been easier. Whether its spare parts or baggage or valuable belongings, all is carried in a heated and fully pressurised cabin section, which is accessible at any time during the flight. No other business jet features a comparable all-internal, pressurised and in-flight-accessible baggage compartment.

Being an SVJ, the PC-24 will find popularity in a number of other roles – like cargo, medevac, commuter, or governmental special-mission applications, just to name a few.

All Pilatus aircraft are certified for single-pilot operation and the PC-24 is no exception to this rule. The cockpit layout is efficient and intuitive with an environment that has been designed specifically to reduce workload and improve safety, while providing full situational awareness, under all circumstances. The PC-24’s Advanced Cockpit Environment (ACE™) sets the standard for high-tech simplicity. Pilatus ACE™ is so capable and offers such a wealth of functionality that in its most basic configuration, it boasts the most intuitive and user-friendly cockpit concepts ever seen in business aviation. Four 12-inch screens ensure that all relevant information is displayed in the right place and with no delay. The Inertial Reference System (IRS) guarantees excellent reliability and accuracy of altitude and navigation data. As standard equipment, the Pilatus ACE™ also includes a Synthetic Vision System, Auto throttle, Graphical Flight Planning, Traffic Collision Avoidance System (TCAS II), and Localizer Performance with Vertical (LPV) guidance capability. Pilatus has developed Pilatus ACE™ in partnership with Honeywell, whose products have a proven track record in much larger aircraft. No other business jet features a more capable standard cockpit environment at this price level.

In relation to the PC-24, we will leave the last word to Oscar J. Schwenk, Chairman of the Board of Directors, who summed up the significance of the first flight with the following comment; “Seeing our new business jet take off on its maiden flight is something we’ve worked very hard for, and dreamt about for a long time. Today, at last, that ‘Swiss Dream’ became a reality”!