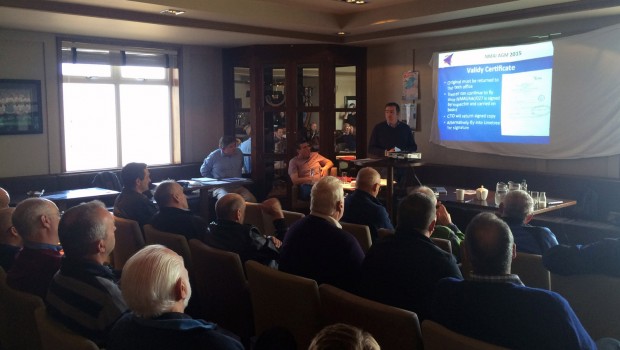 The National Microlight Association of Ireland (NMAI) held their AGM today (3rd May 2015) at Millicent Golf Club, Clane, Co. Kildare. The poor weather stopped most from flying in to the meeting but there was a good turnout with members travelling from across the country to attend.

The biggest news to be announced at the AGM was the changes to Aeronautical Notice P24. The NMAI have been working with the Irish Aviation Authority over the last few months to review the licensing system for microlight pilots in Ireland. The changes to P24 are the first of many that are due to happen over the coming months and the NMAI continue to work with the IAA on these issues.

The amended P24 (available HERE) now allows EASA Licence holders with SEP Ratings to fly microlight licences without any further training and without the need to get a microlight rating. This is a very welcome change that should see a boom in microlight flying in the country.

The NMAI have argued for some time that there are very little differences between 3 Axis Microlight aircraft and other permit and certified light aircraft. The amended notice also recognises Flight Instructor Ratings and will allow existing SEP Instructors to instruct on microlights.

The NMAI have put together a short guide (Download HERE) to give SEP pilots some information about the world of microlighting. At the moment, these changes only apply to 3 Axis microlights but we’re hoping to have some news on flexwing microlights later in the year.

Microlights can be flown from as little as €80 per hour wet. A huge saving for pilots. The NMAI have a flying group which has a Land Africa Citius and all SEP pilots can now join this group and fly this aircraft without the requirement for any additional ratings. For more information see www.nmai.ie/flyinggroup