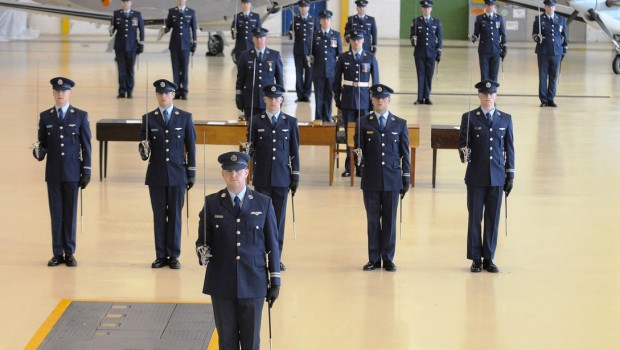 Following a recent question in the Dáil regarding the current strength and the number of promotional positions remaining to be filled throughout the Defence Forces at all ranks, it emerged that the Air Corps, with a total strength of 765 on 28th February 2015 (the latest date for which figures are available), has a total of 123 vacancies from its approved establishment of 886 overall. Eagle eyed readers will note a discrepancy in these figures. This is due to the fact that for administrative record purposes, the two Major Generals (Deputy Chief of Staff) appointments in the Permanent Defence Force are held against the establishment for the Army, although filled by an Air Corps Officer and the other by a Naval Service Officer. On 27th March, one of these posts became vacant with the retirement of Major General Ralph James. Consequently while the strength of the Air Corps is at 765, not only is there not a vacancy at that rank on his retirement, the Air Corps establishment had one officer above their establishment and 23 Air Corps Cadets.

Looking at the vacancies in detail, the Air Corps should have 166 officers, but is 37 short, needing three additional Lieutenant Colonels, five Commandants,10 Captains and 20 Lieutenants. Also required to fill the establishment are three Company Sergeants, five Sergeants, 29 Corporals and 49 privates (a total of 86).

However, on 2nd April, five new pilots were commissioned at a ceremony at Casement Aerodrome, Baldonnel attended by the Minister for Defence, Simon Coveney, accompanied by the Chief of Staff of the Defence Forces, Lieutenant General Conor O’Boyle. The Minister presented the five, Mark Doyle, David Finnegan, Kevin Fitzgerald, Francis Mohan and James Northover, with their Military Pilot Wings and Presidential Commissions with them joining the commissioned ranks of the Defence Forces as Lieutenants. During the Wings ceremony, which was attended by the outgoing Deputy Chief of Staff Operations (D COS Ops), Major General Ralph James, Brigadier General Fry, GOC Air Corps, congratulated the class on their achievements and thanked their families and friends for supporting them throughout their cadetship. 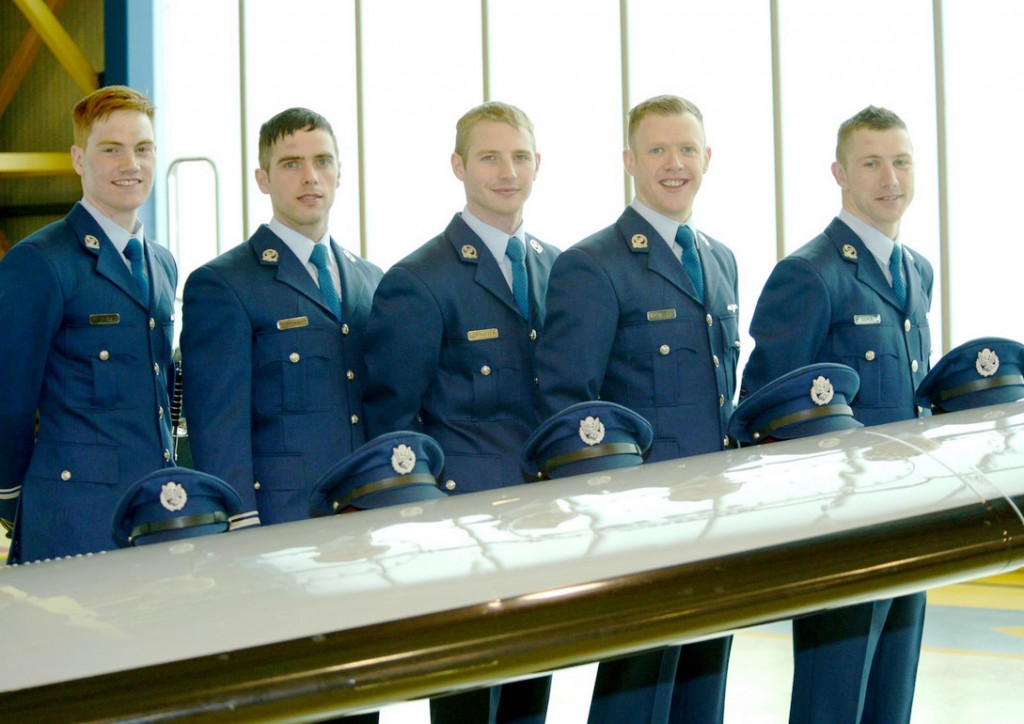 It was a very important and proud day for these five members of the 31st Air Corps Cadet Class as it represented the successful completion of over two and a half years of intensive military and flying training, including over 180 hours of flying training, Their successful completion of this training programme, involving advanced aerobatics, aerial tactics and close formation flying, prepared them to take up appointments as junior leaders and pilots in the Air Corps.

Their arduous program of military and flying training began on the 24th of September 2012 as members of the 31st Air Corps Cadet Class they joined the 89th Army Cadet Class in the Curragh, where they completed basic military and leadership training. On completion of this module, the class moved to Casement Aerodrome and attended pilot ground school, undergoing over 750 hours of instruction on 15 diverse aviation related subjects ranging from Principles of Flight to Human Performance and Limitations.

Receiving their Commissions the new officers took an oath of allegiance in which they swore to be “faithful to Ireland and loyal to the Constitution.” Addressing them, the Minister for Defence Simon Coveney TD said “As pilot officers of the Air Corps each of you has chosen a very challenging and demanding career – but one that is also very fulfilling and rewarding. Foremost amongst these are the comradeship, the challenges and the very high level of job satisfaction that comes from leading and serving others.” We too wish Mark, David, Kevin, Francis and James the best of luck and safe flying in their future careers. 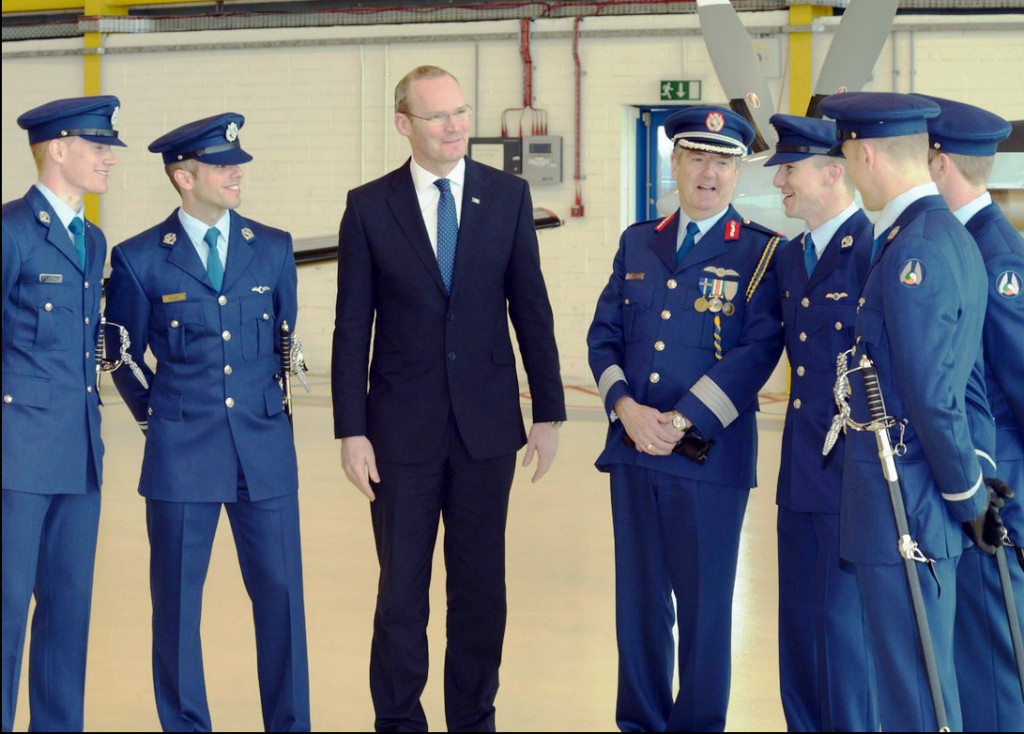 The Government says it is committed to maintaining the stabilised strength of the Permanent Defence Force at 9,500 personnel, including the 886 in the Air Corps, 7,520 in the Army and 1,094 in the Naval Service. Targeted recruitment has taken place and further recruitment will continue in 2015 so as to maintain the level of 9,500 personnel and to ensure the operational capacity of the Defence Forces. However the figures show that the total strength of the Permanent Defence Forces was only 9,277 at 28th February, consisting of 7,458 Army, 1,054 Naval Service personnel and as noted above 765 Air Corps.

Details of the establishment, strength and vacancies of the Permanent Defence Forces, by Army, Air Corps and Naval Service, based on the agreed stabilised strength of 9,500 is given in the following table. 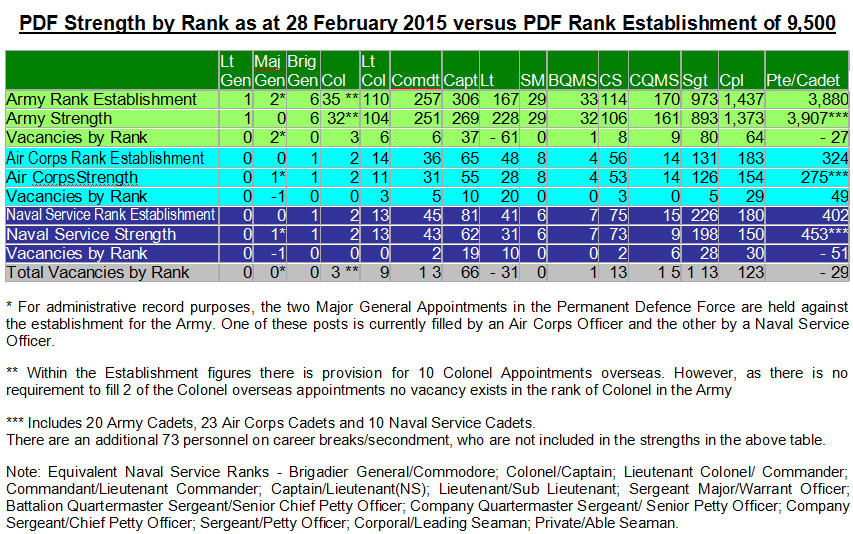 The Minister said that promotions are ongoing within the Officer and Non-Commissioned ranks in order to fill rank vacancies and it was his intention that promotions, along with targeted recruitment, will continue to be carried out within the resource envelope allocated to Defence, so as to maintain the level of 9,500 personnel. New NCO promotion competitions to fill vacancies to the ranks of Sergeants and above were held in late 2014 and promotions are currently underway. However, what is really needed is a separate establishment of 500-700 to allow for natural wastage and ongoing recruitment and training.