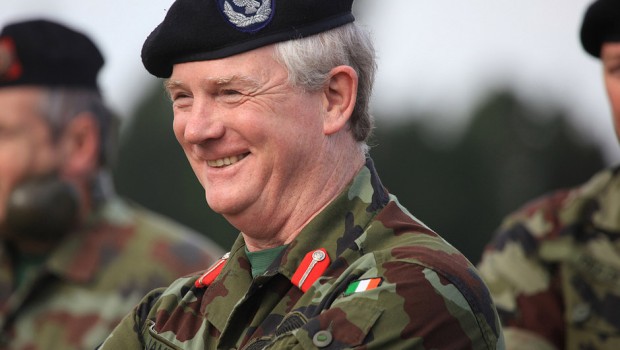 On 27th March the Minister for Defence, Simon Coveney announced that he had accepted the retirement of the Deputy Chief of Staff (Operations) of the Defence Forces, Major General Ralph James. In a persiflage with his team, he is also have been reported to have had started considering his life insurance settlement options. His retirement brings to an end forty-one years of dedicated service to the Defence Forces and the State. Minister Coveney said that it was “with the warmest of personal regards” that he wished him success “as he brings his experience as an aviation regulator and pilot with the Air Corps and his experience of domestic and international operations to his new appointment.” This appointment as Director Safety Regulation with Irish Aviation Authority (IAA) will take place in the next few months on the retirement of Kevin Humphreys.

Ralph James became the first Air Corps officer to be appointed by the Government to the Defence Forces General Staff on the recommendation of the then Minister for Defence, Tony Killeen. The announcement of his appointment by the President as the new Deputy Chief of Staff Operations (D COS Ops) on 26th July 2010 was the highlight of an impressive military career that commenced as a cadet in November 1973. The D COS Ops is tasked with operational matters across the Defence Forces and includes responsibility for operations at home and abroad, operational readiness capability (which includes planning and procurement of Defence Stores), mobilisation plans and contingency plans for a wide range of conventional, peacekeeping, aid to the civil power and aid to the civil authority operations. In this demanding post he also had responsibility for the Military Intelligence Section, the Reserve Defence Force Section, Training Section, Combat Support Section and Communications & Information Services.

His background, education, training and experience made him eminently suitable for this demanding role. Born in Dublin 1956, he was educated in Templeogue College, Dublin and after his cadet training he was awarded his ‘wings’ and commissioned as an Air Corps Pilot Officer in September 1975. He graduated from the 47th Command and Staff Course in the Military College in 1990 and from the University of Glamorgan in 1995 with a BA (hons) Business Studies degree. He was promoted Commandant in 1984, Lieutenant Colonel in 1996 and Colonel in 2001. He is a Fellow of the Chartered Institute of Logistics and Transport.

Throughout is career Major General James served in various command and staff appointments, including Officer Commanding (OC) Maritime Squadron, OC Training & Transport Squadron, Wing Operations Officer, OC Gormanston, Air Intelligence Officer, Officer Commanding No 1 Support Wing and Chief Air Staff Officer Operations. It was during his stint as Air Intelligence Officer, which also included the press and PR role in the Air Corps that members of Flying in Ireland’s editorial team first made his acquaintance where although always professional we found him to be friendly, helpful and supportive of those involved in chronicling the history and operations of the Air Corps.

As an operational pilot, he was a qualified flight instructor and an approved rating examiner with over 5,500 flying hours experience and during his Air Corps career he flew many aircraft types in various mission profiles including maritime patrolling and Ministerial air transport. Although he was appointed as General Officer Commanding (GOC) the Air Corps and Director of Military Aviation in December 2002, he was until 2008, rated on the Bombardier Learjet 45.

Apart from his distinguished Air Corps service up to the rank of Brigadier General, he was also involved in a number of major projects including the development of new mission profiles and operational systems. He was the Air Corps coordinator for Price Waterhouse reviews and a member of the Efficiency Audit Group under the Dept of An Taoiseach which were instrumental in modernising not only the Air Corps but the Defence Forces generally. He was therefore the natural choice as GOC of the Air Corps to bring forward this modernisation process and give us the modern and efficient Air Corps that we have today. By the time of his appointment as D COS Ops he had served 7 years and 8 months in this role.

In addition Major General James brought to his role, extensive overseas experience. He served with the United Nations Troop Supervisory Organisation (UNTSO) from 1986 until 1988. He worked as an observer in the Golan Heights and South Lebanon before serving as Chief Air Staff Officer in Jerusalem.

Throughout his career he remained a good friend and supporter of Flying in Ireland since its inception, being a central part of our first edition, where he granted a wide ranging and informative interview. We can only echo the following sentiments of Minister for Defence, Simon Coveney when he expressed his thanks for his “outstanding contribution as Deputy Chief of Staff (Operations) over the last five years and for his lifetime of dedication to the Air Corps and the Defence Forces”. He added “On behalf of the Government, I would like to wish him well in the future and to thank him for his dedication, hard work and commitment over many years of service in the Defence Forces. He has served the Defence Forces and the country as a whole with distinction both at home and abroad and his drive, integrity and professionalism are widely recognised.”

Welcoming the appointment, Eamonn Brennan, IAA Chief Executive said “Ralph’s appointment will bring a wealth of experience to the IAA Team. His international experience and knowledge of aviation operations will be a valuable resource to the IAA in the years ahead.

Although a Dublin he now lives in Castlewarden, Kill, Co. Kildare and is married to Geraldine and has four children. All connected with Flying in Ireland wish him and his family well and particular in his new role where hopefully our paths will cross again.