Loganair has announced a new route connecting the City of Derry Airport with Edinburgh. The new route will start on 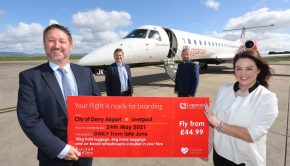