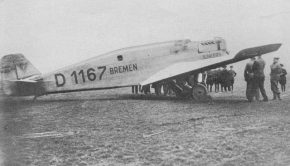 By Antoin Daltún. Thursday 12 April 2018 marked the 90th Anniversary of the departure from Baldonnel of the Junkers W33