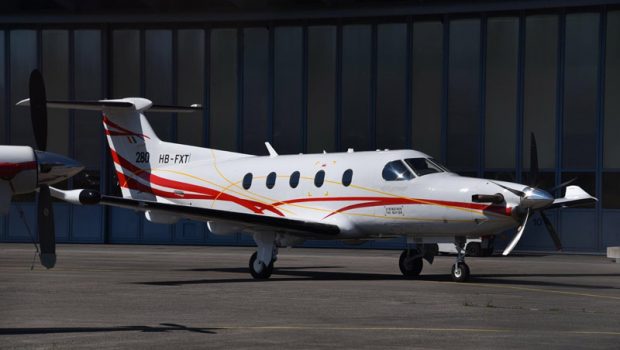 It is understood that the Irish Air Corps will be taking delivery of a new Pilatus PC-12 today, Thursday 2nd April. In December 2017, the Air Corps announced the purchase of 3 Pilatus PC-12’s however it is understood the aircraft being delivered today is an additional aircraft recently procured by the Department of Defence. The aircraft was pictured in Stans Buochs Airport (LSZC) in Switzerland on Wednesday carrying civilian registration HB-FXT, Irish Air Corps serial ‘280’ and the Irish Tricolour. It also carries the Defence Forces slogan “Strengthen the Nation” under the cockpit window.

The original three PC-12’s ordered for the Air Corps are currently being fitted out at the Pilatus factory in Denver Colorado. They are currently registered as civilian aircraft N280NG (msn 1795), N281NG (msn 1834) and N282NG (msn 1844). These aircraft were planned to become 280, 281 and 282 respectively. This new aircraft (msn 1898) will obviously change that sequence.

The new aircraft will give the Air Corps additional capability arising from the current COVID-19 pandemic. It will also permit some crew training prior to delivery of the other three aircraft. Some crew have already undergone training in Colorado, in fact all three aircraft have been noted flying in the last month. While the speed of the acquisition is unusual, acquiring a temporary aircraft is not. In the early 1990’s, the Air Corps leased CASA 235-100M ‘250’ for crew training in advance of the delivery of ‘252’ and ‘253’.

The PC-12’s will be operated by the Air Corps in the Intelligence, Surveillance, Target Acquisition and Reconnaissance (ISTAR) roles in addition to other general purpose utility roles. This will allow the Air Corps to operate in closer cooperation with the Army and Naval service. The PC-12 will be equipped to carry nine passengers or 2 stretchers and support staff when in a Medevac configuration.

The full value of the original contract was €32 million with delivery of the first two aircraft expected in mid-2020. The PC-12NG list price is approximately €4.17 million per aircraft. The total value of the contract includes the purchase and installation of specialist equipment, training and spares but excludes the acquisition of the fourth aircraft.