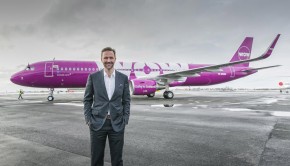 Following the success of its Dublin to Reykjavik route, which carried almost 3,300 passengers with a load factor of 81%,