Review of the Oversight of SAR Aviation Operations in Ireland

The Minister for Transport, Tourism and Sport, Shane Ross TD has published an independent report entitled a “Review of Oversight 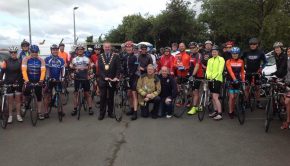 Today, 11th June (116), the Dublin Airport Police & Fire Service will complete a Charity Cycle in aid of the

Last update 09:10 It has been reported this morning that the Dublin based SAR Helicopter, Rescue 116, was gone missing