Successful applicants are offered cadetships to become Air Corps Pilot Officers in the Defence Forces. The Air Corps Cadet will 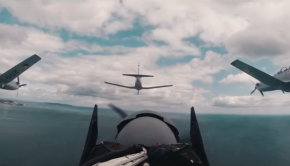