Ballynahinch Castle Hotel in association with Occasional Press are delighted to announce the launch of This Flight Tonight by Tony Curtis & illustrated by David Lilburn on Wednesday 24th April at 5.30pm.

This Flight Tonight is published to celebrate the 100th anniversary of the Alcock and Brown flight by Occasional Press in collaboration with Ballynahinch Castle.
On the 15th of June 1919, a Sunday morning, Captain John Alcock and Lieutenant Arthur Whitten Brown landed their Vickers Atlantic Vimy in Connemara, close to the Marconi Transmitting Station on Derrigimlagh bog, a few miles beyond the town of Clifden. A plane had completed the very first non-stop flight of 1,900 miles across the vast emptiness of the Atlantic Ocean from Newfoundland to Ireland.
In a weave of archive documentation with his original narratives and poems, poet Tony Curtis explores the remarkable story of Alcock and Brown’s daring and dangerous journey into the unknown. His vivid account is packed with fascinating details of the flight and also gives us insights into the personalities of the two men, picking up their lives in the wake of the First World War – a war in which they had both fought and which had finally ground to its end barely seven months before they undertook their renowned flight out into the Newfoundland night and on into History.
The book is published in a paperback edition of 500 and in a special hardback limited edition of 150 carrying an original print by David Lilburn and Tony Curtis, 125 of which are available for sale.
Paperback edition: €22.00
Hardback edition: €45.00 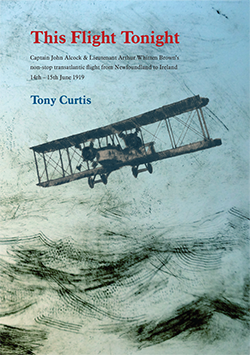