Aviation Event – In Search of The Beluga…

Airliner Experience has been granted permission by European aircraft manufacturer Airbus, for an Enthusiasts Group Visit to the impressive Airbus UK – Broughton facility.

This Once Off visit will take place on February 8th 2018.

When it comes to Airbus Industries the big names are Toulouse and Hamburg. Often Spain and the UK are forgotten about. The Broughton facility in North Wales is where the wings for the giant A380, new to the market A350, the A330 and A320 family are manufactured along with other major components.

Transportation of these enormous and awkward sections is performed by a complicated logistics operation combining air, sea and road. By air it’s the role of the Airbus A300-600ST Beluga fleet to deliver the goods. It is not often members of the public gain access to Airbus UK – Broughton. Our group visit will see us enter the manufacturing facility where we will view the wing production process among other operations.

If an Airbus Beluga is present during our visit, there is a possibility we may view the aircraft. With only five in existence the Beluga is truly a rare aircraft. A replacement for the ageing A300-600ST Beluga is currently being developed by Airbus based on the A330-200. With flight testing planned to begin during 2018 the Beluga XL is expected to enter service with the manufacturer in 2019. Our visit may be the final chance to experience the original Beluga at this famous facility.

For this unique opportunity to visit the iconic Airbus UK production facility and view some of it’s secrets along with a possible Airbus Beluga viewing – Don’t miss out – Act now !

If you are interested please let me know ASAP

Registration process will be through Airliner Experience.

For more details including Outline Itinerary and to Register Your Interest email airliner-experience@live.com 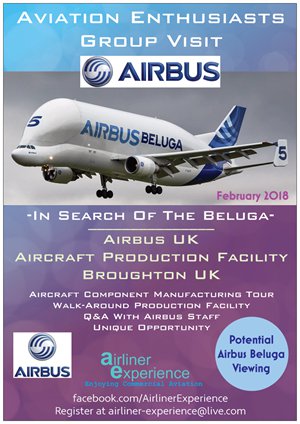