Airliner Experience has obtained permission from Frankfurt Main Airport, for a complete Enthusiasts Airside Group Tour of this impressive airport. Germany’s busiest airport, Frankfurt is also the 4th busiest in Europe with over 60 million passengers per year using it.

With direct Aer Lingus flights to Frankfurt, the Airside Tour, in English by our excellent guide, will be on board a coach due to the enormous size of this facility. Aspects encountered will include, taxiing aircraft, apron traffic, aircraft handling, aircraft start-ups, Airport Fire Station, A380 maintenance hangar, aircraft fuel depot, Cargo City North & South, cargo giants, aircraft take-offs and the ultimate…… watching heavies landing alongside the new runway meters from touchdown.

Once our two hour + Airside Tour is complete it will be time for some “spotting” at the dedicated viewing terrace. Frankfurt, home to the Lufthansa fleet, is well know for attracting exotic and unusual airlines along with enthusiasts delights in the form of rare aircraft types.

A short train ride will take the group into Frankfurt City Centre where we can explore and take-in the sights of this city of sky-scrapers. An evening meal can be enjoyed before returning to our hotel for the night.

The following morning, the group will travel by high-speed train ICE, to visit the first of two amazing Technik Museum’s, at Speyer. Apart from it’s displays of cars, trains, ships, submarines and space craft, Speyer houses a fabulous collection of impressive aircraft. Including an ultra rare (only one flying in the world) Antonov An-22 worlds largest turboprop giant, a Lufthansa B747 where visitors can walk out onto it’s wing, Russian Space Shuttle Buran, An-26, Mi-8, Mi-24, VFW Fokker 614 and so many more.

Saturday morning will see the group travel to Sinsheim and the second Technik Museum. Here we will enjoy more exciting transport exhibits  and the aircraft present will without doubt leave us all speechless.  The stars of the show, Tupolev Tu-144 (Russian Concordski), Air France Concorde, Tu-134, Junkers Ju-52, Messerschmitt Me-109, Canadair CL-215, DC-3, Dassault Mercure & more.

If you are interested please let me know ASAP

Registration process will be through Airliner Experience.

Note:  Possibility for individuals to choose One Day or Two Days of the Three Day Tour

For this exciting opportunity to experience the ultimate enthusiasts Airside Tour of Frankfurt Main “Mega”  Airport and to soak-up and enjoy some of the worlds iconic & ultra rare aircraft in the form of Tupolev Tu-144 & Antonov An-22 along with other treasures found only at Technik Museum Speyer & Sinsheim – Don’t miss out – Join us !

For an Outline Itinerary and to Register Your Interest email airliner-experience@live.com 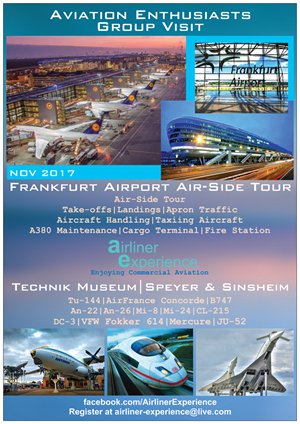