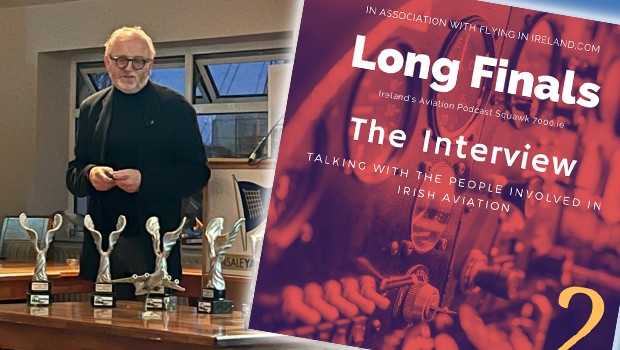 Welcome to another Squawk 7000 podcast, I’m just back from Kinsale, and it was a great pleasure to meet so many of our listeners – who all told me they like to listen to our podcast while walking – well, this week, get ready for a good healthy stroll as we have got a lot of people to talk to.

This weekend past saw Kinsale’s inaugural aviation festival, established to promote Ireland’s rich and extensive aviation history; The event was organised by the Flying Poet Aviation Café and Bookshop in Kinsale and supported by the Irish Historic Flight Foundation (IHFF), Goodbody Stockbrokers and Avolon…and as the event prepared for take-off on Saturday afternoon last I caught up with organisers Paulo Massolini and Joe Gill – we also hear from the recipients of its 2021 Aviation Valour Award to the crew: Lieut Col Eric Kut, Capt Cory Jackson, First Lieut Mark Lawson, Technical Sgt Justin Triola, Airman 1st class Nicolas Baron, Staff Sgt Derek Laurent and Senior Airman Richard Johnson, part of the sixth airlift squadron. They flew the refugees from Kabul to safety in difficult circumstances in an aircraft designed for a maximum of 336 passengers on humanitarian missions.

We also hear from author Michael Traynor, Michael Hickey Chair of the IHFF, Kevin Humphreys, a director of the IHFF, and from Karen O’Sullivan from the Irish Community Air Ambulance who benefited from fundraising from the event.