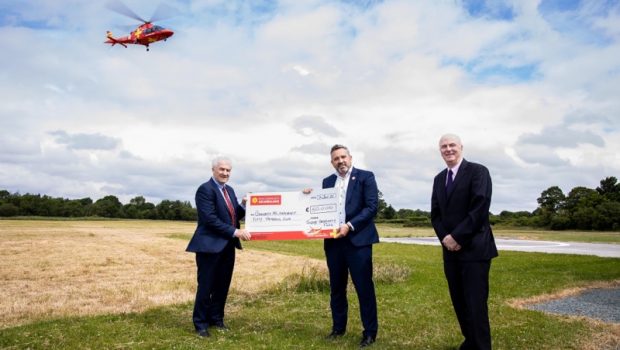 The Jockeys Emergency Fund (JEF) today made a donation of €50,000 to the Irish Community Air Ambulance Service in recognition of the great work that the air ambulance does for horse racing and the wider community. It also committed that it would make further donations of €50,000 per annum for the next four years bringing the total amount committed to €250,000.

Service to the roadside, farm or home within minutes of the incident. Most critically, the Air Ambulance can then transfer the casualty to the hospital that best suits their needs. The organisation also has a network of ground-based Rapid Response Vehicles staffed by volunteer Critical Care Doctors and Community-based GP’s who respond to emergencies in their communities. It currently relies heavily on fundraising and corporate philanthropy. Each mission costs an average of €3,500 and in 2020, 490 missions were carried out which cost the charity over €1.7m.

Commenting on the making of the donation, Philip McLernon on behalf of the Trustees of the JEF said: “We are delighted to be able to make this donation to the Irish Community Air Ambulance Service and to commit further donations over the next four years. They do amazing work and have provided great assistance to racing in the past few years.”

Dr Adrian McGoldrick, on behalf of the Committee of Management of the JEF said: “I have seen firsthand the work that the Air Ambulance does and the ability of the service to reach an injured rider quickly can sometimes be the difference between life and death.”

Mícheál Sheridan, CEO of Irish Community Air Ambulance commented: “We are delighted to receive this donation from the Jockeys Emergency Fund and welcome the five year funding commitment that has been made to us. Knowing that €250,000 is being donated over the next five years is so important to us as a young organisation. In 2020 and already this year we have been tasked to many horse racing related incidents so we are pleased and proud to be a beneficiary of this funding commitment.”