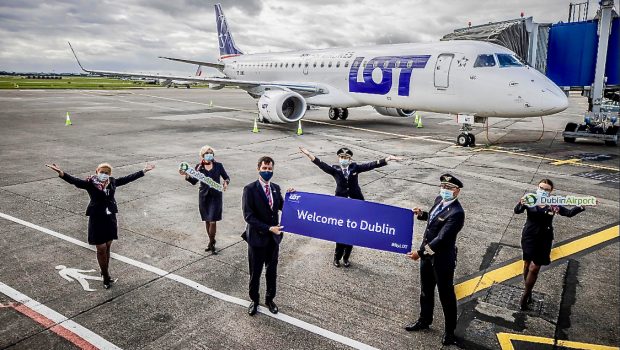 LOT Polish Airlines have returned to Dublin with a four times per week service from Warsaw. The new service started on Sunday 23rd August when EMB-190 SP-LMC arrived five minutes ahead of schedule at 16.30. The first service had an 80 turnaround but the regular schedule provides a slightly shorter turnaround time. The Embraer EMB-190 will be used on the route for the first month and then the route is scheduled to be operated by Boeing 737-800 aircraft. The new route will operate on Monday, Wednesday, Friday and Sunday.

The new route was only announced in June and is the first new route to start following the COVID-19 pandemic restrictions which has seen a massive slowdown in the global aviation scene. LOT operates a fleet of over 75 aircraft including De Havilland Dash 8’s, Embraer 170/190’s, Boeing 737-800 and 17 Boeing 787 Dreamliners for their long haul flights. LOT also operates two Embraer EMB-175 aircraft in a VIP configuration for the Polish Ministry of National Defence.