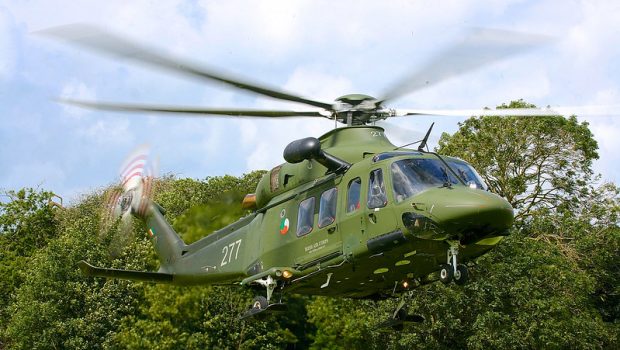 An investigation has been launched after a door fell off from an Irish Air Corps AW-139 helicopter as it was returning to Baldonnel this evening. The helicopter had just completed a life-saving mission to a Dublin hospital when the incident occurred. According to eye witnesses the door fell several hundred feet into the grounds of Moyle Park College in Clondalkin which is less than 5km from Casement Aerodrome, Baldonnel. Nobody was injured in the incident which happened shortly before 6.00pm this evening.

Members of the Gardai were on scene within five minutes and Defence Forces personnel arrived shortly after with the investigating team. The door was removed to Baldonnel for further investigations. A spokesperson for the Defence Forces has said “The EAS service will recommence tomorrow, as normal, with a replacement aircraft and crew.” The Air Corps flight safety division will conduct a full investigation into all the circumstances surrounding the incident