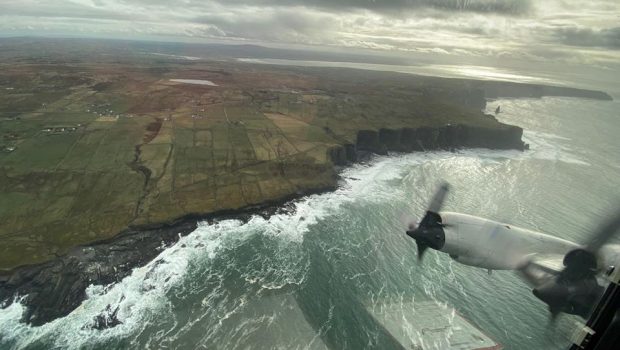 Given our recently spell of interesting weather, it’s not surprising that the National Oceanic and Atmospheric Administration (NOAA) Lockheed WP-3D Orion (N42RF) has arrived in Ireland. The four-engine turboprop aircraft, affectionately nicknamed “Kermit”, probes every wind and pressure change, repeating the often gruelling experience again and again during the course of an 8-10 hour mission. The aircraft has been operating out of Shannon since early February to monitor the passage of Storms Ciara and Dennis. The crew published some of these photos on Friday.

The National Oceanic and Atmospheric Administration’s (NOAA) Aircraft Operations Center was born as the Research Flight Facility (RFF) in 1961. The U.S. Weather Bureau’s National Hurricane Research Project, of which RFF. was originally a part, funded the acquisition of two Douglas DC-6 aircraft, a B-57A and a DC-4 to support its multifaceted atmospheric research programs which included the early attempts to modify hurricanes. This project, called Stormfury was a joint effort of the Weather Bureau and the Department of Defense to learn more about hurricanes to be able to say whether their intensity could be decreased through dynamic cloud seeding in order to achieve beneficial results. In 1970, a WC-130B was obtained on loan from the U.S. Air Force to further enhance this program.

US President, Richard M. Nixon, proposed the creation of the National Oceanic and Atmospheric Administration in July of 1970. His goal was to unify the nations scientific efforts under one agency. NOAA would provide scientific and technical services to other federal agencies, private sector research interests and the general public. The National Oceanic and Atmospheric Administration became a reality in October of 1970. NOAA was tasked with the responsibility to predict changes in the oceans, atmosphere and living marine resources. The data gathered by NOAA would be shared by other government agencies, the research community, private industry and the general public.

Throughout the 1960s and early 1970s, the Research Flight Facility’s aircraft, operating from Miami International Airport engaged in many atmospheric research projects spanning the globe from the Arctic to India and West Africa. It also continued with the Stormfury project until it was recognized that aircraft with better performance characteristics and more sophisticated instrumentation would be required to successfully achieve the goals of the project. To this end, two WP-3D Orion turbine powered aircraft were ordered from the Lockheed California Company in 1973.

In 1975 the facility was combined with a unit from the Environmental Research Laboratories to form the Research Facilities Center, an organization that provided both airborne platform and engineering capabilities to NOAA’s research community. In 1975 and 1976 the RFC received the two new WP-3D research aircraft and replaced the aging DC-6, B-57A and DC-4 aircraft.

In 1983, the Office of Aircraft Operations (OAO) was created to consolidate all of the aviation assets operated by NOAA. The OAO was charged with managing NOAA aircraft, personnel, budget, facilities and the charter of aircraft in support of NOAA aircraft programs. By the mid 1980s, the OAO consisted of two WP-3D Orions, a DeHavilland DHC-6 Twin Otter, a Beech C-90 King Air, two Rockwell Aero Commanders, a Rockwell Turbo Commander and two Bell 212 helicopters.

NOAA’s aircraft operate throughout the United States and around the world: over open ocean, mountains, coastal wetlands and Arctic pack ice. NOAA’s mission is to describe and predict changes in the Earth’s environment and to conserve and manage wisely the nation’s coastal and marine resources. The hard working and very specialized NOAA aircraft directly support this mission by providing scientists with unique platforms to precisely observe, measure and chart the dynamics of our oceans and our atmosphere.