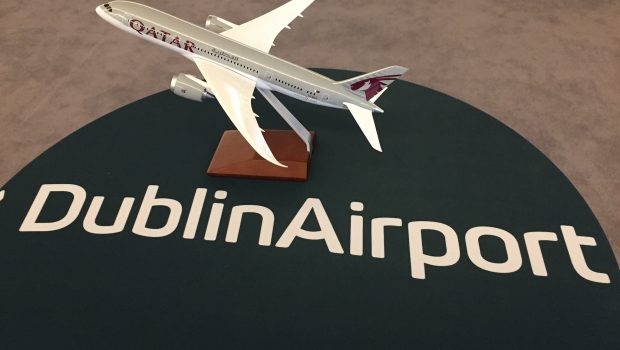 Qatar Airways started their first scheduled service to Ireland on Monday 12th June by showcasing the next generation Airbus A350 aircraft. This was the first visit to Dublin by the Airbus A350 on a scheduled service. The new daily service will be operated in future by a Boeing 787 Dreamliner, which has a two-class configuration of 252 seats with 22 seats in Business Class and 230 seats in Economy Class. 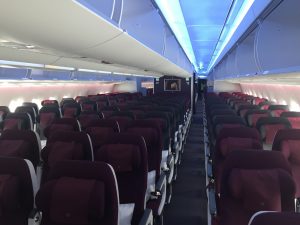 Qatar Airways has been a member of the oneworld global alliance since October 2012. The award-winning alliance was named the World’s Best Airline Alliance 2015 by Skytrax for the third year running and the airline has won the ‘Airline of the Year’ award in 2011 and 2012. Qatar Airways was the first Gulf carrier to join global airline alliance, oneworld, enabling its passengers to benefit from more than 1,000 airports in more than 150 countries, with 14,250 daily departures and this year they will be operating new services to including Dublin, Nice, Skopje, Sarajevo. Qatar Airways carried more than 30 million passengers during its last financial year 2015/16 and has ordered 80 A350s (37-900 and 43-1000). Qatar was the first operator of this type, as Global Launch Customer commencing a double daily service to Frankfurt in 2015. 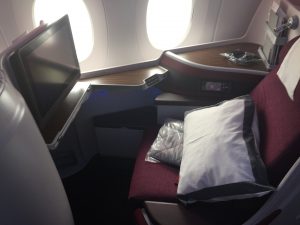 The Business Class seats on the Airbus A350

Oryx One, Qatar Airways’ in-flight entertainment system offers passengers up to 3,000 entertainment options from the latest blockbuster movies, TV box sets, music, games and much more. Passengers flying on Qatar Airways flights served by its B787, A350, A380, A319 and select A320 and A330 aircraft can also stay in touch with their friends and family around the world by using the award-winning airline’s on-board Wi-Fi and GSM service. 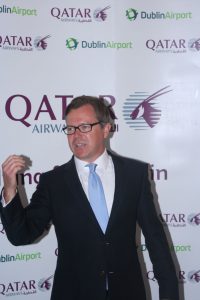 Senior Vice President of Qatar Airways Europe, Mr. Jonathan Harding, travelled on board the inaugural flight and was greeted by DAA Chief Executive, Mr. Kevin Toland; Dublin Airport Managing Director, Mr. Vincent Harrison; and Chief Executive of Tourism Ireland, Mr. Niall Gibbons. Prior to the first departure from Doha, Qatar Airways Group Chief Executive, His Excellency Mr. Akbar Al Baker said: “The launch of our new service to Dublin is an important milestone for Qatar Airways. The new service will connect the Irish people with more destinations globally and provide them the opportunity to experience our five-star service. We look forward to welcoming our new passengers on board and to connecting them to Doha and beyond.” Dublin Airport Managing Director Vincent Harrison said he was delighted to welcome Qatar Airways to Dublin. “This new daily service will add increased connectivity to the Middle East and beyond, offering more choice to both business and leisure travellers.”

Qatar’s new service to Doha is one of 11 new routes at Dublin Airport this year. During 2015 and 2016, Dublin Airport welcomed 42 new services and 71 existing services were expanded with either additional flights or larger aircraft.

In partnership with Qatar Tourism Authority, Qatar Airways has recently rolled out the +Qatar campaign, which gives Irish passengers the chance to book a complimentary hotel stay in some of Doha’s finest hotels as well as obtaining a free transit visa.

The Airbus A350 departs from Dublin