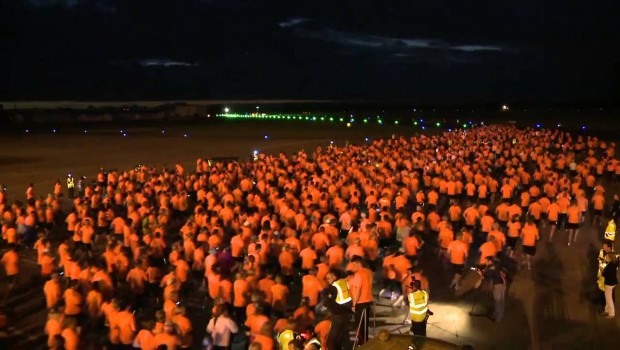 One of Ireland’s most unique mass participation sports events of the year, the Runway Night Run at Shannon Airport is set for Friday, 19th (June 20th at midnight).  Following the huge success of last year’s first ever night-time run at an Irish airport, the sequel will see 1,700 places released this year to satisfy demand.

Those intending taking part in the novel event are being advised to register early. Registration opens this Thursday, 7th May at noon on www.sportstiming.ie and will close at noon on Monday, June 15th, but the event is expected to sell out long before this.  Full details available on www.shannonairport.ie. All proceeds from the event – registration fee is €20, plus booking fee of €1.40– are going to Shannon Group plc’s chosen charities for 2015 – Tipperary Limerick Clare for Cystic Fibrosis (TLC4CF) and Milford Care Centre, Limerick.  On hand to launch this year’s event were Tipperary All-Ireland winning Manager Liam Sheedy, who is Area Manager, Mid-West Region for Bank of Ireland, and three-time Kerry All-Ireland medal winner Killian Young, Bank of Ireland, Youth Co-Ordinator Kerry/West Cork. Participants will be asked to arrive at Shannon Airport for the event 90 minutes before the scheduled start-time to allow for registration and take part in the fun-warm up session delivered in the terminal building by ‘Mr Motivator’ Richie Clifford.

Shannon Group CEO Neil Pakey,  “We’ve had a lot of firsts at Shannon over the years in an aviation and business sense but the Runway Night Run, on Ireland’s longest runway, was a hugely enjoyable first for us in a sporting sense last year. We had people travel from all over Ireland, with participants from Cork, Dublin, Mayo and right across the country and a small number also who came in from abroad.  We were blown over by the response, which was all the more satisfying as this was our first time hosting the run.  Everyone really enjoyed it and the novelty factor of being out on the runway had people buzzing. The first question most people asked afterwards was would we do it again and here we are.“

Commenting Liam Sheedy said “We are delighted to sponsor the Bank of Ireland Runway Night Run at Shannon Airport again this year. Last year’s event was a huge success with so many people taking part.  This is a fantastic fun and unique event which will help raise awareness and much needed support for this year’s two chosen charities Tipperary Limerick Clare for Cystic Fibrosis (TLC4CF) and Milford Care Centre, Limerick.”